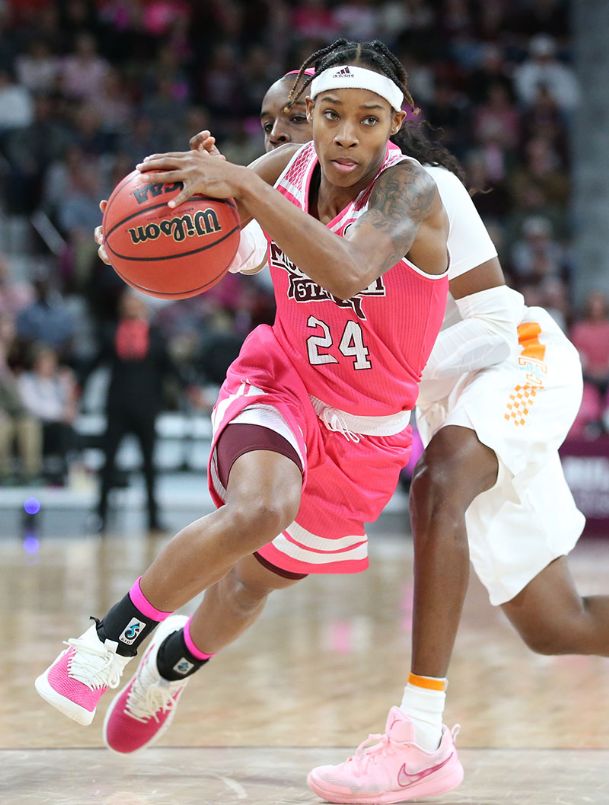 STARKVILLE -- Jordan Danberry in attack mode is a scary thought for defenses.

Whether it's in tight spaces or in the open floor, there are few players in the country who are faster and more athletic than the Mississippi State senior guard.

"I have been in treatment all week, and the trainer has been real good helping me get it back right, and it showed tonight," said Danberry, who missed nearly all of the second half against Alabama last Sunday after tweaking an ankle.

Danberry might have to credit teammate Anriel Howard for an assist. She said Howard was responsible a new braided hairstyle that came to be after she decided she "needed to do something" with her hair.

There was no change in Danberry's game plan to get to the rim. As MSU coach Vic Schaefer has said for the last two seasons, Danberry can get to her spot on the court any time she wants to. She exhibited that multiple times against Tennessee (15-8, 4-6), either by going spin cycle on a move in the lane and finishing with her left hand in the first quarter, or dashing out in the open court and gliding in for a layup.

"Jordan was as good today as she's been in her career," Schaefer said. "She had four assists, no turnovers, and was 10-for-15 (from the field). ... The kid averaged two points a game a year ago. She's our second leading scorer. I knew she could do this. I knew from the moment I saw her play in high school when I tried to get her the first time. She's just really playing well. She's another point guard. She sees the floor well. She makes great decisions with the ball. I just love her attack mode right now. She was really locked in today."

Danberry's 10 field goals were her second most in a game. She also recorded her third game of the season without a turnover and got back into double figures in points after her eight-point outing against Alabama snapped her string of 16-straight double-digit scoring efforts.

McCowan adds to her totals

Teaira McCowan delivered another dominating performance that should help her case for SEC Player of the Year honors.

The senior center poured in 24 points and grabbed 15 rebounds in 37 minutes. She also had three blocked shots and two steals in an all-around effort that included a run-in with the scorer's table.

McCowan helped set the tone in the first quarter for an energetic performance when she jumped onto the scorer's table to the left of the MSU bench in an attempt to track down a loose ball. The hustle was part of a defensive showing by the Bulldogs that forced 18 turnovers.

"I just gave my team energy," said McCowan, who had her 19th double-double of the season and 58th of her career. She also inched two points away from passing Jennifer Fambrough (1,677 points) and moving into fifth place on the school's all-time scoring list. "Diving at the ball gets the crowd excited, which excites us, and that's what makes us want to go harder. [I] just wanted to give the crowd something to watch and not something that will make them want to fall asleep."

McCowan acknowledged running into the scorer's table "hurt," even if Schaefer chided her by telling her it is padded.

Schaefer is routinely seen running around Humphrey Coliseum and on the MSU campus.

McCowan's activity on defense likely will mean Schaefer will have some additional running to do in practice. With three blocked shots and no finger waving or stares at opponents, McCowan won a deal with Schaefer, which means he will have to run a 34, a conditioning drill, in practice.

"Coach (Schaefer) said I also have to keep my cool after blocking a shot and make sure not to get too excited and behave poorly after," McCowan said.

Schaefer said McCowan has been known to be a little "emotional and excited" after a block. He said he agreed he would run a 34 if she has three blocks and stays within herself.

Prior to tip-off, members of the media received a press release that said Tennessee sophomore point guard Evina Westbrook wouldn't play due to a violation of a team rule.

In the statement, Westbrook, the Lady Vols' leading scorer at 16 points per game, said she "arrived late and missed a class this past week." She said she takes full responsibility for her actions and that it wouldn't happen again.

Tennessee senior Meme Jackson said the team learned Westbrook wouldn't play "a couple of days ago. She didn't think Westbrook's absence "really affected us that much." Jackson said Tennessee "had the game in our hands" trailing 51-47 with 4 minutes, 17 seconds left in the third quarter only to see it slip away.

"We were close," Jackson said. "We just kind of stopped playing hard."

Rennia Davis had a season-high 29 points and six rebounds for Tennessee.

"We had no answer for Rennia Davis," Schaefer said. "She was as good as I know she can be and knew she can be."

The 91 points were the most MSU has scored against Tennessee. ... The sellout crowd of 10,021 was MSU's fourth of 10,000 or more this season. The attendance pushed MSU's average to 8,160 in 12 home dates, which moves past Tennessee (8,011) for second place in the SEC. ... The SEC regular-season winning streak matches Auburn for the sixth-longest streak in league history. ... Jazzmun Holmes had seven points and eight assists (one turnover) in 35 minutes. Her play helped MSU bounce back from a 17-turnover effort against Alabama with only eight. "She had everybody where they needed to be all day, every day, and all night," Schaefer said. "She really just led our team." ... MSU will play host to Missouri at 8 p.m. Thursday (SEC Network).