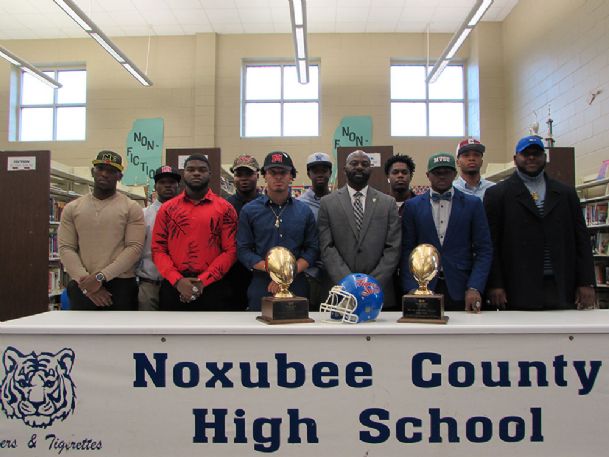 Former Noxubee County High School football coach Tyrone Shorter poses for a picture with 10 of the players from his 2018 team who signed Wednesday to play football in college during a ceremony in the schoolâs library. Photo by: Adam Minichino/Dispatch Staff

The Noxubee County High School football program has followed that plan for the last 20 years with impressive results.

On Wednesday, Tyrone Shorter and Noxubee County High unveiled its latest group of student-athletes to receive opportunities to play football in college. Two -- Kyziah Pruitt and Maliek Stallings -- already had made their intentions to play at Mississippi State and at Memphis known, but they joined their eight of their teammates and another former teammate in signing National Letters of Intent to continue their athletic careers.

Kaiyus Lewis (Mississippi Valley State) joined Pruitt and Stallings in signing with a Division I school.

Shorter, who last month accepted a job to become football coach at Louisville High, returned to the school where he started as an assistant to longtime head coach M.C. Miller and then replaced him to send his last group of Tigers off the right way.

"To have 11 guys sign scholarships out of this class just adds on to the many guys that came before them," Shorter said. "We have kids all over the state, all over -- and not just in the state of Mississippi. We have kids in Tennessee and at different places. It just says a lot about this program and the things we have done here. We have put the work in and the kids believe in the program. ... It makes you feel proud as a coach to see so many kids get an opportunity to go to school and further their education and get a chance to do what they love to do, which is play football."

Shorter thanked the parents and the community for their support in building a program that is known in every part of the state for producing quality young men and players. He said it is satisfying to have three players receive Division I offers. He said the "sky is the limit" for Pruitt, Stallings, and Lewis as well as the rest of the Tigers.

Pruitt, who was emotional late in his remarks prior to his signing credited Shorter by saying he wouldn't be the man he is today with his coach. If not for a change of heart Wednesday morning, Pruitt said he wouldn't have been a part of the ceremony because he said he already had signed and he didn't want to take away from his teammates' day. His decision to take part in the festivities turned out to be the perfect final piece.

"It was a day I was always looking forward to," Pruitt said. "Ever since I was growing up, I dreamed of signing. In the ninth grade, I saw Jeffery (Simmons) sign and then Kymbotric Mason and all of them sign, so I dreamed of doing it."

Shorter said Pruitt and Stallings are "NFL-type caliber players," as evidenced by the number of schools that recruited them.

Stallings said he didn't have any doubts about wanting to be a part of the ceremony Wednesday. In fact, he said it is something that he has been looking forward to after watching the last three classes take the next step.

"I used to say, 'I can't wait until it is my turn' and the day finally came," Stallings said. "It was kind of shell-shocking. I never thought I would be in a position like I was today. I am here now. I just want to give thanks to God for it."

Stallings said he "stayed hungry" to realize his goal and his dreams. He said he had the confidence he could be one of the "big-time players," so he just had to put in the work and make himself one. From quarterback to wide receiver to defensive back, Stallings showed the athleticism and potential that attracted so many schools.

"My coaches just put me in position and I just played ball," Stallings said. "Our class stayed together and made each other work hard. We told everybody we were going to sign together and we made it happen."