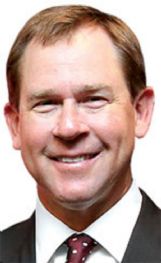 Mississippi State Director of Athletics John Cohen told The Dispatch he has been in contact with the Southeastern Conference offices regarding the officiating from MSU's 24-0 loss to Alabama Saturday.

"I've personally communicated with the coordinator of football officials, Steve Shaw, and SEC Commissioner Greg Sankey," Cohen said. "Both of them assured me that Saturday's game with Alabama is being fully reviewed, and they also stated that the official issues will be identified swiftly and dealt with directly."

Several moments in the first half -- in which Alabama built a 21-0 lead -- drew public scrutiny. One of Alabama's first offensive plays was a fumble by running back Damien Harris on which he was deemed down before he lost control of the ball; the play was not reviewed. Alabama scored on the drive.

In the final moments of the first half, MSU had two apparent touchdowns taken off the board by penalties. A touchdown pass to Kylin Hill was negated by a block in the back penalty on Deddrick Thomas and a second touchdown pass was negated by delay of game. Under normal circumstances, a delay of game penalty means an immediate dead ball, but play continued through Nick Fitzgerald's throw to Justin Johnson before the officials got control of the play.

Cohen told The Dispatch he did not believe any of the communication with the SEC offices to be unusual. He believes all athletic directors are in constant contact with the league office.

"I think it's the norm, but I can only speak to my conversations with them," Cohen said. "I have tremendous respect for both of those guys. I know it's their goal to get it right. I really believe they always do a great job of reviewing and making sure the issues are identified and dealt with swiftly and directly."