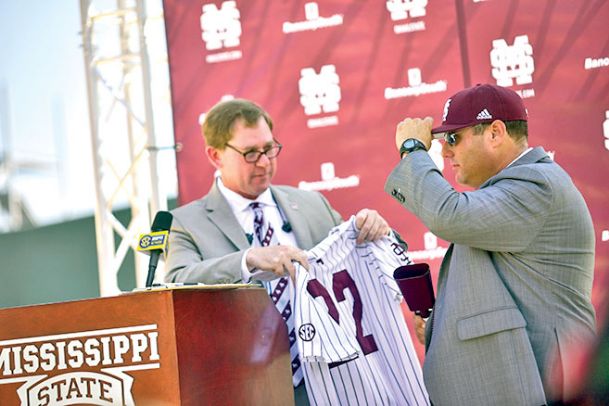 STARKVILLE -- The transition from baseball coach to athletic director has not weakened John Cohen's relationship with baseball. Through the spring, Cohen and his wife Nelle would often take in games from the upper deck, which was closed from the public due to continuing construction, offering the two some privacy at the game.

From that vantage point, he was given the best view possible of his favorite part of the new Dudy Noble Field: the new so-called Left Field Lounge.

Aside from the challenges of a midseason coaching change, the 2018 MSU baseball season was working through a home stadium that remained an active construction zone through the season. It was viewed as a necessary evil in the grand plan to have one of college baseball's best venues fully operational for the 2019 season.

In Cohen's exclusive interview with The Dispatch, he praised all parties involved for making the season as smooth as he thought it was.

"The construction company did an incredible job making that facility playable for a SEC season," Cohen said. "They did an incredible job from (Senior Associate Athletic Director/Events & Facilities Management) Jay Logan to (Assistant A.D./Event Management) Brent Fry, (former Associate A.D./Facility Planning and Construction) Bobby Tomlinson, everybody on our staff did a great job of making sure our kids could still compete through the construction."

Cohen was quick to point out the project was put in place before his took over as athletic director, but he was still involved in some of the logistical planning. He was dedicated to make it work for the team at Dudy Noble Field for the 2018 season, with Alabama's struggles in a similar situation fresh on his mind.

When Alabama renovated Sewell-Thomas Stadium, its 2015 season was the one impacted by construction; it chose to play its home games at Hoover Metropolitan Stadium, the host of the Southeastern Conference Tournament, a 47-mile drive from its campus.

Avoiding that meant playing in a live construction zone, in a stadium with limited entrances and a stadium that was unavailable for many practice periods thanks to that construction.

Based on the feedback Cohen got from fans during the season, it was all worth it.

"The feedback that I got, personally, was really good," Cohen said. "You're always concerned when you're doing something like the Left Field Lounge and you're dealing with 45, 50 years of tradition, you're concerned about how people are going to respond to it and I think there was a very favorable response to it."

Cohen even heard from long-time suite and club level members who had not been out to the Left Field Lounge in a long time, visited the new version and thought twice about where they want to be in the future.

Such responses made Cohen even more impressed with the architects, Wier Boerner Allin.

"Those guys did a great job of knowing what the expectation was and meeting and exceeding that expectation," Cohen said. "We're going to keep trying to make it better and better, and I think we're off to a really good start."

The further improvements come in the second year of construction, as crews will continue building the stadium until opening day of the 2019 season. Most of the projects are new additions to the stadium that used for the 2018 season -- the apartments outside of left field, the upper deck in the grandstands, concessions stands in the concourse, etc. -- but one tweak will be in the protective netting. Cohen said the netting will be refined and brought to a more exact set of specifications before the 2019 season.

By the time the 2019 season comes around, the stadium will also have a grand home plate entrance and could have an additional entrance down the left field, funneling in from the parking lot of the football facility.

All of those entrances come to the concourse that circles uninterrupted all the way around the stadium, including the outfield lounges. It is there that Cohen sees the biggest success of the new stadium.

"The accessibility part of it makes me so much happier," Cohen said. "I wanted more people to experience the Left Field Lounge."