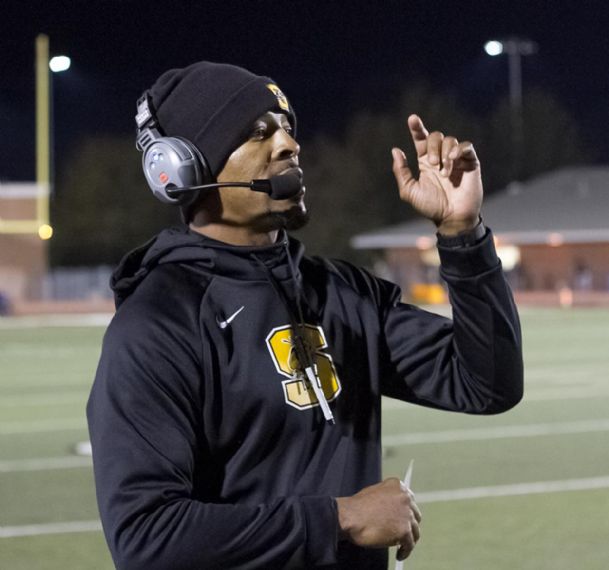 After winning the MHSAA Class 6A North State championship last season, coach Chris Jones will try to carry Starkville all the way to the state title in 2018. Photo by: David Miller/Special to The Dispatch

Dispatch sports writer Scott Walters will look at five prep football questions each Wednesday between now and Aug. 17, 2018, as we count down to the start of the prep football season.

Congratulations, you have almost made it.

A time period that almost felt like forever has almost come and gone. The countdown to football season is down to slightly over one month.

The area prep football season will again feature new coaches, a new crop of talented seniors and countless storylines to be told.

We are hearing Starkville and Noxubee County will be pretty good.

However, the list of star-studded teams won't end there.

We have several that could be playing for it all when the oppressive heat finally breaks.

While we have almost made it, we aren't all the way there.

So let's kill some time with a bevy of questions between now and then.

West Point won all 15 games it played. The lowest margin of victory was a 19-point road win over Grenada in the playoffs. In the regular season, the Green Wave routed the Chargers, 48-0. So yes, they weren't up for the game. It happens.

To win is one thing. To destroy the opposition is another.

2. Which first-year coach will have the biggest impact this season?

There are several candidates with Lowndes County boasting three new coaches (Eric Rice at Columbus, Wade Tackett at New Hope and Michael Kelly at Caledonia) by itself.

We will give a slight nod to Rice. A year ago, Columbus finished 2-9. The Falcons had some talented but a series of injuries really muddied the waters.

The team lost confidence early and wound up playing short-handed, while finishing the season with a six-game losing streak.

Rice should inherit a ton of rising juniors and seniors. The attitude was already there, because the kids always played hard even in defeat.

In some 7-on-7 competition this summer, the Falcons have gotten good reviews.

However, 7-on-7 tells you nothing about how well the offensive and defensive lines will play.

A year ago, Columbus was ... let's say not good ... along the line. That will have to change quickly for the team to have any chance this season.

3. Which player will be missed the most from last season?

It is not uncommon for a high school superstar to play multiple positions to help a team in a variety of ways. However, some coaches are reluctant to put one player everywhere, due to fatigue, over exposure or risk of injury.

That could not be said for Murphy. He was able to help as a pass thrower, pass catcher and runner. He also handled some kick return duties.

Murphy was also gifted enough in the classroom to graduate early. He joined the Mississippi State program in January and figures to get a lot of playing time as a freshman this fall.

Coach Chris Chambless will miss several players from his state championship team of a year ago. However, No. 2 is actually No. 1 in that category.

4. Is it too late to submit question or has everything been thought out for the upcoming season?

It is never too late to submit question for this column. Just get on the Twitter or the email and fire away with anything that you would like answered.

Most writers would take the easy route and ask themselves all of the questions. That's not the case here.

We have six weeks of these, so plenty of time. No sense in all of the fun being protected when it can be shared.

5. Any other things to get off the chest from last season?

To make someone do a radio broadcast in a press box with heavily-leaking roof is harsh and unfair. Plus, it is not safe with a lot of equipment plugged into a wall, when rain is coming in sideways.

As one of the premier programs in the state, it would be nice to see facilities better than some of the Class 1A schools around the state.

Scott Walters is a sports reporter for the Commercial Dispatch. He may be reached at [email protected] Follow him on Twitter @dispatchscott.

1. No. 14 Mississippi State blown out by No. 8 Texas A&M as serious questions arise COLLEGE SPORTS

4. 'This is the biggest game of the year': Mississippi State men ready to clash with Ole Miss for first time in 2021 COLLEGE SPORTS