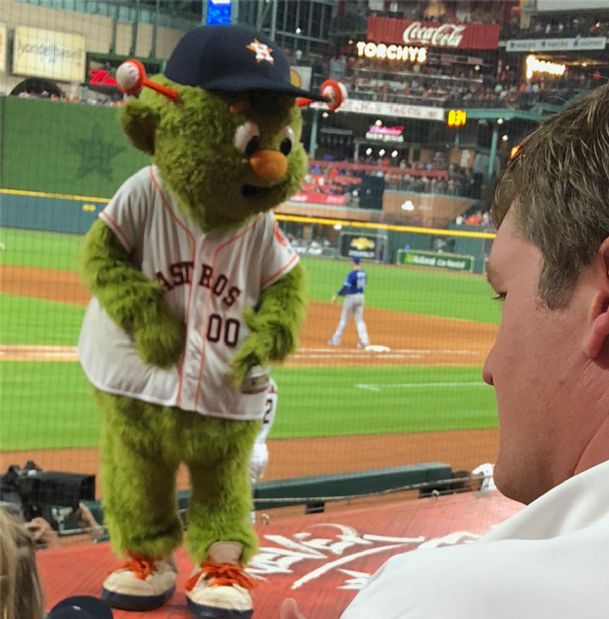 There is nothing quite like seeing an old friend.

A five-year absence makes a chance encounter even more remarkable.

In my childhood days, my father stuck me with two wildly different professional sports obsessions.

In football, my childhood was spent rooting for the frequent Super Bowl contender Washington Redskins. Summers were spent wondering how many games the Houston Astros would finish out of first place.

A really odd combination of rooting interests. One doesn't have to explain the Redskins. Well, everyone loves a winner.

Now as far as the Astros are concerned. Urban myth has it that they were picked because he was in high school and it would be neat to follow a team from its beginning.

That still does not clearly explain why your writer was also stuck with a childhood of rainbow uniforms and the rare brush with greatness. Thank God for Nolan Ryan.

However, in case you haven't noticed, being an Astros fan has finally been cashing in of late.

Even better news, Twitter is here so one can run their mouth about one of the best franchises presently on the diamond.

This is no bandwagon fan hood. This is sincere passion.

Granted recent success certainly made it easier for Gavin Gilbert and myself to key Houston into the GPS and to head west earlier this summer.

In the space of 24 hours, it was a 7-0 Astros win over the Toronto Blue Jays Tuesday night and a follow-up 7-6 Astros win on Wednesday.

In the series finale, the Astros finally came all the way back from a 5-0 deficit on an Alex Bregman walk-off home run.

The seats were good, as were the one dollar hot dogs on Tuesday night.

With the exception of the Blue Jays fans with no concept at all of baseball behind us, the trip could not have gone much better.

These fans knew the words to O Canada but did not know it was runs instead of points.

Now that my father has settled into retirement life, he has three main interests - watching three grandchildren, watching baseball on television and attending Davis Wade Stadium on Saturdays in the fall.

When the Nielsen ratings show a 0.0001 for the Padres-Pirates game, well my dad is probably in that demographic.

In 2011, the Astros started strong. That probably meant something like 4-2.

Eventually reality set in. The Astros slipped five games below .500. Still, my dad could not grasp me not getting the MLB package.

Finally, as compromise, the offer was made if the Astros got back to .500, I would go all in. The team did hit a win streak and made it to .500, Hours after buying the package, a 12-game losing streak followed.

While we thought the early 90s were bad, they had nothing on what would follow.

Still, the Astros were building a farm system. It was ranked the best in baseball following the 2014 season.

Even a Sporting News article in the fall of 2013, the Astros would win the World Series 2017.

That would have been like predicting a Mississippi State women's basketball appearance in the Final Four.

Not soon after that, the pieces did begin to fall in place.

Minute Maid Park has a 2015 wild-card champions pennant on its outfield wall. Who knew winning a one-game series qualified as a championship of some sort?

Most likely, the New York Yankees would not claim such. Still, that success broke a 10-year postseason drought.

The 2015 run which ended with a loss to the Kansas City Royals in the American League playoffs was so great that it is actually where the "History of the Franchise" section ends on the Astros' web site.

That is why Minute Maid Park was packed for a 1 p.m. start on a Wednesday afternoon.

Thanks to Jose Altuve and a lot of his close friends, those days are long gone. Following the Astros is fun, It is fashionable.

The MLB TV package was bought early this season. The commissioner has even been forgiven for shoving the team into the American League.

Fortunately, the team has become a successful diversion to the fact that Jay Gruden is still paid to be coach of the Redskins.

Scott Walters is a sports reporter for the Commercial Dispatch. He may be reached at [email protected] Follow him on Twitter @dispatchscott.