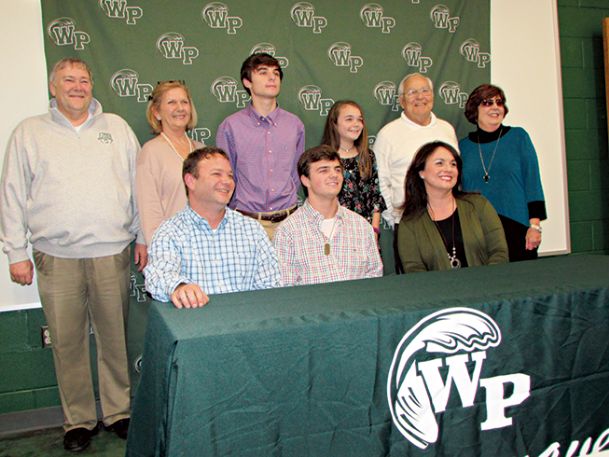 West Point High School senior quarterback Clayton Knight poses for a picture Monday to announce he will play football at East Mississippi Community College in Scooba. His grandparents, Bob Knight and Nancy Knight; his brother, Cade; his sister, Mary Mize; and his grandparents Frank Whitaker and Wanda Whitaker, are standing. His father, Clay, and his mother, Casey, are sitting with him. Photo by: Adam Minichino/Dispatch Staff

When you're part of a championship program, schools tend to come calling, even after the first wave of players make their commitments official.

On Monday, West Point High School seniors Edwards and Knight announced their intentions to play football at East Mississippi Community College in Scooba. Neither player signed a National Letter of Intent at the ceremony, which was held in the school's new field house. West Point High football coach Chris Chambless said both players would wait until the spring to receive their scholarship offers, but that the program wanted to announce the decisions of two players who played integral roles in its eighth state title, and first since 2010.

"We always tell the guys that a lot of things happen after signing day," Chambless said. "If you're a good player, somebody is going to get them. East Mississippi came on and got them, and that is what we had hoped for and expected that somebody would come and pick them up. (EMCC football) coach (Buddy) Stephens and his staff know what they're getting."

Knight said he and Edwards visited Scooba at the same time and were impressed with what they saw. He said the football facilities is "top notch," just like they are at West Point High, so he felt right at home. Even though he spent only one season with the Green Wave, he feels he will fit in well with the recent success EMCC has had on the football field. This past season, EMCC (11-1) beat Kilgore (Texas) College in the Mississippi Bowl to finish No. 2 in the nation. The Lions are perfect in postseason bowl competition (5-0) under Stephens. EMCC won national championships in 2011, 2013, and 2014.

"That was the most stressful time of my life," Knight said of the days immediately following National Signing Day on Feb. 1. "I have played football all of my life and I was not ready to give it up. I thank God East Mississippi came through because I don't know what I would have done."

Knight said the coaches at EMCC looked at highlights of his games on Hudl, an online video analysis tool that help coaches and athletes, and liked what they saw. He recently spoke with Chambless, who informed him he had been talking with the coaches at EMCC. Knight said he hoped he didn't have too long of a highlight package and that he made the right reads in his clips before Chambless told him about EMCC's interest in him.

"I would like to be a part of a championship team, and they have them down there," Knight said. "They have so many championships and they produce players to go to the next level. I know I am not the tallest guy in the world (at 5-foot-10), but I have heart. I hope that will get me through to the next level after East Mississippi."

Edwards was part of a deep group of receivers that benefited from Knight's presence. He had 34 catches for 453 yards and five touchdowns. He also had two rushing touchdowns. His 824 all-purpose yards were third on the team.

Edwards said coaches from EMCC came to watch several West Point games this past season. He said he encouraged Cunningham to be his spokesman and to tell them about all of his good points. He thanked Chambless, too, for working after National Signing Day to help him get an opportunity.

"I can score in open space," said Edwards, who is projected to be a slot receiver. "I can catch the ball and get yards after the catch. I am ready to do that there.

"I am going to make it count."

Chambless said he and all of his assistant coaches do their part to promote their players to schools. He admitted it gets frustrating at times, but he praised Stephens and the Lions for recognizing Edwards and Knights are two good players and two even better people. He said the Green Wave didn't have to do a lot of "selling" to Stephens or the Lions' other coaches. Chambless said Edwards and Knight knew they were going to wait on the right offer, so he wasn't surprised to see them not sign on National Signing Day.

"East Mississippi has been good to West Point," Chambless said. "They're going to take care of them."