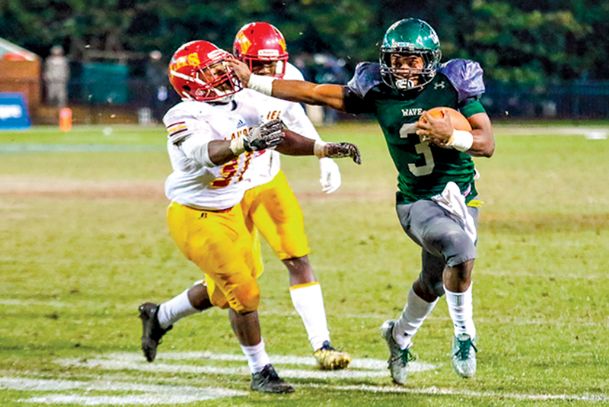 West Point High Schoolâs Chris Calvert uses a stiff arm to hold a Laurel defender off in their game Saturday at Mississippi Stateâs Davis Wade Stadium. Photo by: Chris McDill/Special to The Dispatch

West Point High School football players one after another said the same thing in the preseason interviews in August.

The buzz words were "pride" and "tradition." The phrases included "long time coming" and "ready to win state."

Those are common words for the Green Wave. The players used them to lay the foundation for what they hoped would be a journey to the program's eighth Mississippi High School Activities Association (MHSAA) State championship. What made the situation unique was that it had been six seasons since West Point had won its last state title, so even if the players were accustomed to the high expectations, they hadn't been able to realize that goal since 2010.

While Burton said he had concerns, his eyes had a look of confidence. The look could be found in the players' eyes, too. One could tell this season was going to be different for the West Point football team.

Even Burton couldn't help but crack a smile long before he was handed the game's final stat sheet.

Laurel was held to 98 yards of offense. Sixty-seven of the yards came on the team's scoring drive. Laurel had 11 possessions. Seven lasted three plays or less. Ten netted 18 or fewer yards.

Perhaps West Point was channeling some of the elite teams of the past. The last time the teams met for a state championship, West Point won 3-0 in overtime in 1988 for the Class 4A title.

Clinton beat Pearl 49-35 Friday night to win the Class 6A championship. If there was any doubt Clinton senior Cam Akers was the best player in the state, he removed all of that doubt by accounting for all seven of his team's touchdowns.

The game was thrilling, competitive, and entertaining. However, it didn't look like either team was really interested in hitting one another. The teams combined for 881 yards and 40 first downs. Clinton had to play Akers on defense in the second half of the season because the Arrows were giving up too many yards and too many big plays.

Saturday's West Point-Laurel game also was highly competitive. The Green Wave led 10-8 at halftime. As the rain intensified, the game had the look of one where a critical mistake could swing the momentum in someone's favor.

Instead, the West Point defense was dominant. The Green Wave will hit you over and over and over. If you like defense, that had to be a refreshing change from the finesse games played a night earlier.

To Laurel's credit, the Golden Tornadoes also competed on defense. Laurel didn't resemble a squad that had allowed 42 points in one playoff win and 27 points in another playoff win. Laurel had good team speed and also played physical football. However, West Point was up to the challenge.

It wasn't a total shock. Oxford won the last two North State Class 5A championships thanks in part to regular-season and postseason victories against West Point. This season, West Point beat Oxford twice by a combined score of 63-8.

West Point was the state's top-ranked team in Class 5A in preseason and backed that ranking.

The disheartening news for the rest of Class 5A is West Point likely will be the favorite in 2017. On offense, Marcus Murphy will enter the season as the state's best player. The Mississippi State commitment will shift back to playing more quarterback, but he already has proven he can do anything on a football field. Fellow running back Chris Calvert also will return.

Quarterback Jake Chambless saw lots of playing time this year and will be ready to fill the void left by Clayton Knight. Jason Brownlee, who emerged as one of Class 5A's best receivers, also will be back.

West Point was credited with 39 tackles against Laurel. Sophomores or juniors made 30 of them. Nine position starters figure to return on defense. If you liked Terrence Cherry, Brent Cunningham, Trey Brownlee, Xavier Fair, and Ryan Melton this year, wait till next year.

In other words, coach Burton, be prepared. Your team will be built up early and often.

Scott Walters is a sports writer for The Dispatch. He can be reached at [email protected] Follow him on Twitter @dispatchscott.