Four of five MSU goals this year have come from newcomers 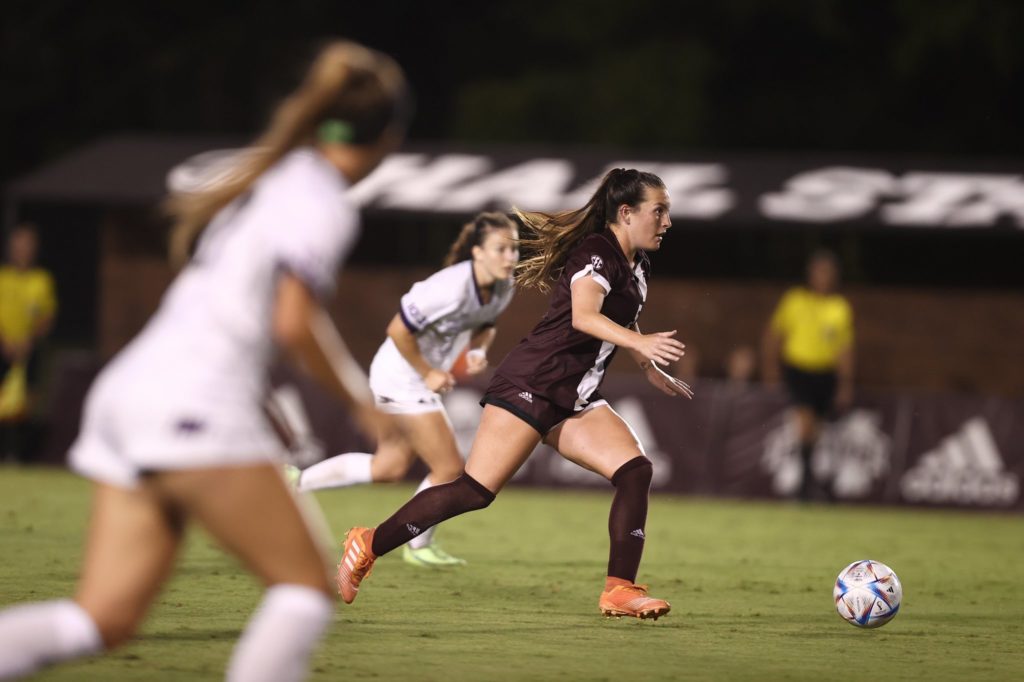 STARKVILLE — Mississippi State midfielder Ally Perry found herself with the ball just outside of Lipscomb’s 18-yard box, open to shoot as she pleased.

The Bulldogs immediately went on the counter after Bisons forward Kale’a Perry’s shot was saved by Maddy Anderson, who quickly got the ball out, putting MSU on the attack in the early stages of the second half.

Ally Perry hasn’t been one to take shots from 20-25 yards out, but this time, she sent a perfectly placed ball in the top right corner for MSU’s second goal of the match and her first career collegiate goal.

Two goals proved to be plenty as the Bulldogs (2-0-1) won their home opener against Lipscomb, 2-0, snapping a three-game losing streak against the Bisons.

“I got the ball and I turned, started driving in, dipped my shoulder and just decided to just go for it,” Perry said. “I always regret not doing it and it finally went my way.”

From the jump, Mississippi State looked strong in the attacking third of the field, putting pressure on Lipscomb’s defense and goalkeeper CJ Graham early.

Freshman Maggie Wadsworth bagged her first collegiate goal about 11 minutes or so into the match, finding a cross into the box that she was able to knock past Graham.

Perry had another chance a bit later in the half, getting a one-on-one opportunity in the box that she pushed wide right of the net. She was more than able to redeem herself in the second half with that goal outside the box.

The young influence of this MSU team has really shined through early on, as Wadsworth’s goal, the fourth of the season for the Bulldogs, was the fourth that had come from newcomers — either transfers or this season’s freshman class.

“We’ve got a great blend of experience and youth,” Mississippi State head coach James Armstrong said. “The good thing for us is that the youth has come and blended straight away.”

Wadsworth and fellow freshman Alivia Buxton, the reigning SEC freshman of the week, were quite effective on attacks and being in the right place at the right time.

The crossing Thursday night was on point overall, and it helped as MSU more than tripled Lipscomb’s total shots and more than doubled the Bisons’ shots on goal, 13-4 and 7-3.

“We’ve been working a lot this past week on finishing and building through the midfield and really pressing forward,” Wadsworth said. “I think it was finally our time to show it, and as our coaches were saying in the locker room before, we needed to play how we play, and we just came out and did it.”

Putting out this performance against a team like Lipscomb, who has been to the NCAA tournament three of the past four seasons, is a major confidence booster for MSU heading into Sunday’s match against Minnesota.

Armstrong talked before the season about how important a tougher nonconference schedule was for this team, and so far, the Bulldogs have met that standard.

“This was needed,” Perry said. “We needed the confidence. We have been working so hard, and it’s been so hard for us to find results like last year, and this is great for us. We really deserve this as a team.”

The Golden Gophers, a program that is steadily improving in the Big Ten and coming off an eight-win season in 2021, will be no easy task.

These two teams faced off last season as MSU and Minnesota played to a draw in Minneapolis.

Round 2 is being held in Starkville this season, and with great performances from the youth so far, momentum is on the Bulldogs’ side.