Bulldogs were up 12 in second half 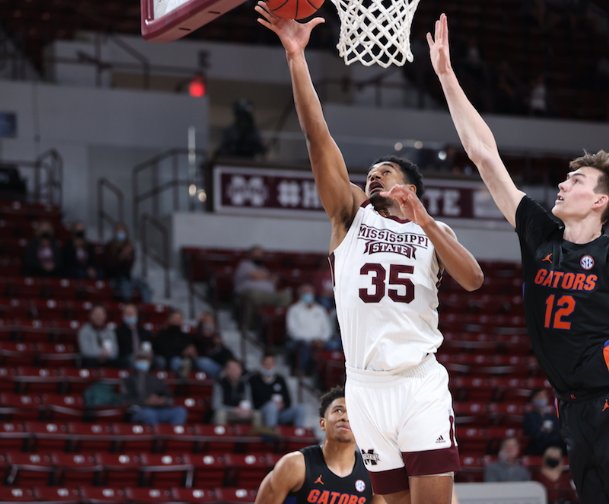 Tolu Smith had a double-double with 22 points and 11 rebounds as the Bulldogs beat Richmond in overtime, 82-71. Smith played in his second game back from foot surgery. Photo by: Courtesy of Mississippi State Athletics

But the Bulldogs still made sure to leave the islands with a win.

Mississippi State (5-1) dominated the overtime period to beat Richmond (3-4) by a score of 82-71 in the tournament’s consolation game.

The Bulldogs rebounded from Thursday’s 72-58 loss to Louisville to beat the Spiders for the second time in as many seasons. Mississippi State edged Richmond by a single point in the NIT this March.

Tolu Smith led the Bulldogs with 22 points in his second game back from foot surgery, scoring 14 points in the second half and four more in overtime. The one-time Western Kentucky transfer had a double-double with 11 rebounds.

MSU scored the first five points of overtime and outscored the Spiders 16-5 in the extra period after a late Richmond run. The Bulldogs led by eight points with 2:46 to go, but their opponents came roaring back.

Jacob Gilyard hit a 3-pointer and was fouled by Shakeel Moore before Tyler Burton hit a pair of free throws with 9 seconds to go, tying the score at 66-66. Mississippi State had led 46-34 less than four minutes into the half.

But Cameron Matthews made a layup to start off overtime, and Iverson Molinar hit a 3-pointer to put MSU up five points. Mississippi State’s lead never dipped below three after that as the Bulldogs hit six free throws to ice the game.

MSU missed three foul shots in overtime but finished 19 of 23 overall from the line, its best performance this year.

Molinar scored 15 points for the Bulldogs, while D.J. Jeffries had 13 and Garrison Brooks had 11.