Our view: Celebrating our differences

Possumhaw: Birds and their feathers

There's no mistaking the indigo bunting, his sleek small body and that screaming teal color.

In love with daylilies

Growing up on a cotton farm in Lamar County, Ala., Juanice Hayes made a promise to herself -- she would not make her living hoeing in the dirt. She had plenty of that as a child, thank you. And while that has been the case, technically speaking -- Hayes taught fifth grade at New Hope for 34 years -- she has broken that promise. In a big way. 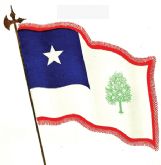 The "Bonnie Blue Flag" which was once called the "Lone Star Flag" has been a symbol of Southern independence for more than two hundred years. The flag was first raised, to resounding cheers, on Sept. 23, in Baton Rouge, La. It had been designed by Melissa Johnson, who was the wife of dragoon Major Isaac Johnson. It was quickly accepted by the rebels as their symbol of independence.

This Saturday, a home-cooked meal in Starkville could cost you $125. You can be sure it won't be your standard meat-and-three. Chef Ty Thames of Restaurant Tyler is preparing a seven-course feast made with locally sourced ingredients as a fund-raiser for Gaining Ground, a organization dedicated to the promotion of a sustainable lifestyle.

Voice of the people: Cameron Triplett

Saggy pants are a fad, a fashion craze. I think it's crazy, but it's an in-your-face expression of rebellion. I find it disgusting and highly offensive. I would like to carry a can of lighter fluid around to squirt on the seats of nasty underwear exposed to view, but unfortunately my right to be offended stops at everybody else's nose.

Kenyon King's life defies expectations. The day his mother, Tangenika King, dropped out of high school to get a diploma in motherhood, she had likely never heard of American University.

Our view: Bigger fish to fry

Let's forget, for a moment, the challenges associated with enforcing a "saggy pants" ordinance. (Who wants to be the officer responsible for measuring -- and documenting -- how far a man's pants hang below his waist?)

Out of the Blue: A son's salute

During the summer of 1978 I got a chance to salute my mother with a fly-by, of sorts, near her childhood home of Somerset, KY.

Birney Imes: The trumpets of angels

A.J. Steverson wants to set the record straight. It's the Hitch Lot, not the Hitching Lot, as it is often called. A.J. should know. He grew up in a white clapboard house near the southwest corner of the Hitching ... I mean Hitch Lot. He can remember when farmers hitched their horse-drawn wagons there and walked up the hill into town.

Our view: Ban texting while driving

A car moving 60 mph will go more than the length of a football field in the five seconds a driver looks down to send a text or dial a phone number. That driver is more than 20 times likely to have an accident than a non-texting driver.

Voice of the people: Judy Gaither

She lifted up the spiny tail and put it in her mouth. She grinned and said it tasted just like she remembered, crispy like a potato chip.

Twice a week Harry Walker and John Jones meet here for two hours of chess. Here is the Highway 61 Coffeehouse, a hole-in-the-wall on a sloping street two blocks above the Mississippi River. Both men are retired, Walker from Entergy and Jones as IT specialist for several Fortune 500 companies.

Singer-songwriter Jimmy Buffett once said, "Indecision may or may not be my biggest problem."

3. Our View: Local leaders rise to the challenge DISPATCH EDITORIALS

5. Our View: Public and press prevail in pursuit of LTC names DISPATCH EDITORIALS