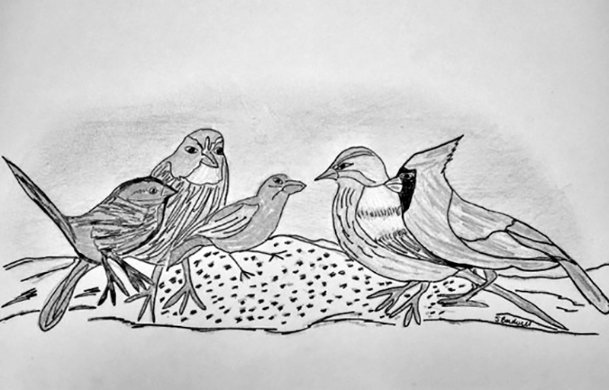 Often, I sit in the lawn and have my morning cuppa amidst the twittering of rare birds. Hema Malini- Indian actress/director 1948-

As I glanced out the window birds were gathering around the cracked corn, I had tossed out earlier in the day. Amid the freezing ice and snow and scarcity of food I heard a bird singing. It stopped me in my tracks. Not only was it freezing and without provisions there was Harry, the cat, all puffed up and watching the birds from only a few feet away. Danger was lurking and yet the bird sang. Perhaps the bird would have preferred organic wild birdseed or oiled sunflower seeds or in a pinch maybe even stale bread. But instead, what it got was hard, dry, cracked corn and yet it still sang. I stood watching and thinking about that singing bird. Eventually Harry left and more birds gathered, scratched, and pecked in the hardened snow. The sun peeked out and again the bird sang. Not every bird sang though they were all eating at the same table and under the same conditions. Some birds hopped and some fought, while other birds darted fearfully to and from the bushes and trees. Oblivious to the others this little bird sang.

I have no idea what all these birds are. The cardinal both male and female are obvious, as are the bluebirds. Two bluebirds spent most of the day fighting over the bluebird house. Rather than eating they were tussling with one another even though there are other bluebird houses nearby. Some of the birds must be sparrows-small, dark, and rather nondescript. Crows are large and a bit scary. Blue jays and woodpecker were around last week but they were not feeding with the group that day. Maybe we have a chickadee, a nuthatch, a grosbeak, a starling, a finch; I'd like to think we do.

The lakes are frozen over as are the birdbaths and other water sources. I can only hope the melting snow and icicles provide some water for wildlife. Before breakfast we saw a couple of does, a buck, and some fawns walking along the tree line. I'm sure this weather is hard on them, though less so than hunting season. They walked slowly and gracefully into the woods. I wondered about their water and food supply. It was all frozen.

The rabbits had a lamp that provided warmth but not enough to keep the water bottles usable. While the water did not freeze the narrow spout did. As a precaution I added a bowl of water for each rabbit. Rex drank from his bowl while Hatcher let hers freeze. I readjusted the light toward the spout. The rabbits had heat, blankets, and lights. Even so the lettuce froze before they could consume their rations. We were limited to pellets and a carrot.

Ice with a topping of snow covered the fish pond. I broke two holes for oxygen. The goldfish seemed suspended. Peering through the windows of the greenhouse, it looked like all had survived. Oh, if I could sing like the songbird.