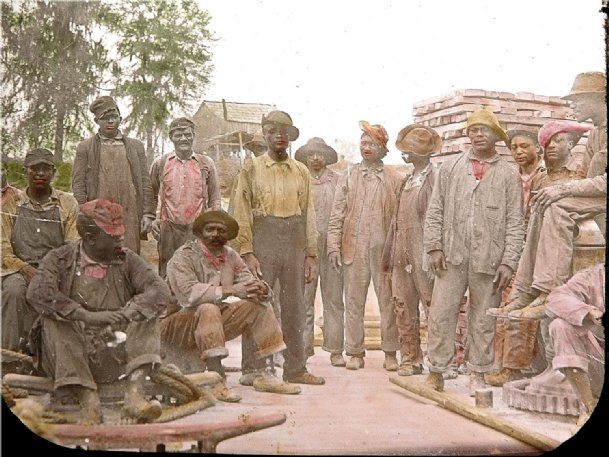 Deckhands on a Tombigbee River steamboat c. 1910. These men are typical of those who worked on steamboats at the Columbus riverfront from 1823 to 1919. It's past time to tell their story. Photo by: Courtesy photo

I've written before about how the Riverwalk is not only a touch of natural beauty at the edge of downtown but also a place steeped in history. Much of that history is the Black history of Columbus.

It was about 10 years ago that the late Sam Kaye came up with the idea that the Columbus Riverwalk should be made a Black history trail, with signage at sites along the walkway marking almost 500 years of Black history.

Research by Sam, Carolyn Kaye, Gary Lancaster and myself has turned up the potential for at least 12 historic markers along the Tombigbee riverfront in Columbus related to Black history. Three of the markers are along First Street South of the Riverwalk parking lot and the others are along the Riverwalk itself.

There is a rich Black history in Columbus, and it is a story that needs to be told. In thinking of that story, here are some of the people, places and events that could be marked along the Columbus riverfront and Riverwalk.

At the south end of First street South was Turner's Cut, which was a mid-1800's river landing with a cotton slide cut through the bluff for loading cotton bales onto steamboats. The Blacks, at first enslaved persons and later freemen, who rolled the 500 pound cotton bales from warehouses to the slide and pushed them down to the boats below were called rollodores.

In 1842, engineer Horace King, though an enslaved Black person, constructed the first bridge across the river on the upper Tombigbee and built several other bridges in Lowndes County. The Tombigbee bridge came off the top of the bluff at Fourth Avenue South and was a wooden covered bridge 420 feet long.

From the site of those warehouses to the foot of Main Street was the original Columbus river landing. The first keelboat for Tombigbee River trade built at the site of Columbus was said to have been built by two Black men in 1817 or 1818. The first steamboat, the Cotton Plant, arrived here in March of 1823. Many Black workers, enslaved and then free, worked there handling cargo and tending to boats for almost 100 years.

A few of their work chants heard at this site have survived. This one mentions steamboats in the Columbus-Mobile trade during the 1870s.

In the area of this parking lot would also be a good place for a marker telling of the Black men who were part of the earliest exploration of the Tombigbee valley. The expedition of Hernando de Soto, which crossed the Tombigbee in the Columbus area during December of 1540, included seven or eight Black men.

From the river landing at the foot of Main Street, hundreds of steamboats departed for Mobile during the 1800s. The crews were made up of mostly Black men. Though often not publicly identified, Black crewmen saved many lives, sometimes at the cost of their own, during disasters such as the burning of the Eliza Battle in 1858 and the WH Gardner in 1887.

The Gardner left Columbus for Mobile in late February 1887. On March 1, she caught fire and burned near Gainesville. Though 22 people died, the death toll would have been much higher but for the heroic actions of several Black crew members.

The heroic acts of BeeBee Macaw, the boat's Black "cabin boy," received national recognition when he saved five people. His actions were even celebrated in the famous Old West newspaper, The Tombstone Epitaph.

Buried under the river bank across from the pavilion between Moore's Creek and the Island bridge rest the remains of the Alice M, a small steam boat owned by two Black Columbus businessmen, Wesley and Eli Hodges, who operated a blacksmith and wagon repair shop. The boat was headed upriver when its boiler exploded, killing the boat's fireman Wesley Rienhart. The boat drifted down river and lodged against the west bank just north of the 1877 bridge.

Rienhart was buried on the riverbank near Symons Mill. The mill was located on the east bank of the river between what is now the mouth of Moore's Creek and Ruben's Catfish Restaurant.

A branch of the Underground Railroad was said to run up the banks of the Tombigbee with the spiritual "Follow the Drinking Gourd" as a verbal road map. It is a story that has received national attention and has even been covered by National Geographic. The pathway to freedom was said to have been made by a man called "Peg-Leg Joe" and was marked with the image in charcoal or mud of a footprint and a circle on tree trunks.

The Riverwalk ends not far upstream and not too far south of Plymouth Bluff. At the bluff and the mouth of Tibbee Creek we find a wealth of history.

From 1736, we have the story of Simon, who was known as "the Brave free Black." Simon was a free Black French officer who commanded a company of 45 Black French soldiers during the French-Chickasaw campaign of May 1736. The French force of about 600 came up the Tombigbee and camped for three days at Plymouth Bluff.

George Gaines (US Choctaw Factor) in March 1814 sent supplies by flatboat from John Pitchlynn's residence (US Choctaw Interpreter and acting agent) at Plymouth Bluff to St. Stephens. He had a crew of five, including Dick, a Black man. Earlier in January 1814, Gaines had sent a Choctaw Factory (trading post) boat upriver from St. Stephens to Pitchlynn's. Two unidentified Black men were hired to row the boat. Between 1806 and 1816, 22 different Black men were employed by the U.S. Choctaw factory (trading post) on the lower Tombigbee River.

Peg-Leg Joe's image of a foot and a peg leg leading enslaved people to freedom could be used as a unifying symbol on all the historic markers identifying what is a very historic pathway along the Riverwalk. It is truly a walk through which almost 500 years of African-American history can be experienced. It is past time for Sam Kaye's vision of years ago to be developed.