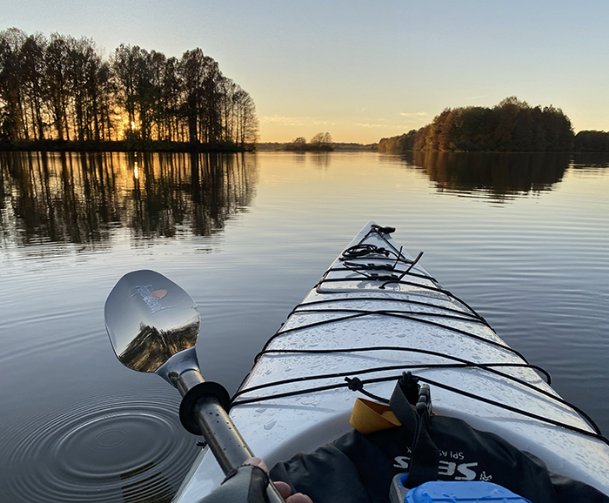 The Columbus Lake at sunset one day this past week. Photo by: Birney Imes/Special to The Dispatch

"We lose a great deal when we lose the sense and feeling for the sun. When all has been said, the adventure of the sun is the great natural drama by which we live, and not to have joy in it and awe of it, not to share in it, is to close a dull door on nature's sustaining and poetic spirit."

It seemed strangely incongruous to sit in the predawn light at my laptop in PJs and Paul Thorn autographed baseball cap singing hosannas to Mother Nature.

While some may rue the coming season with its cold nights and muted colors, these past few weeks have been nothing short of glorious.

Maybe this is Mother Nature's antidote to the pandemic. She is pulling out all the stops in her efforts to lure us outside, into nature, into the sunlight and fresh air.

Sure, the day when the Pagans rally at Stonehenge is still a while away -- the winter solstice this year is Dec. 21 -- but this pure, brilliant light coming from the south will be with us for several months. That is until our spinning top of a planet has again tilted toward the sun causing the days to lengthen and the air to turn warm and moist.

The end-of-day light show begins around 3:30 or 4, as was noticed by this motorist traveling along Waverly Ferry Road this past week

The stretch of road between the railroad tracks at Ralph Williamson's camp house and Wilkins-Wise Road offers tantalizing snapshots of Columbus Lake, fingers of mercury-like water surrounded by vegetation made iridescent by the late-day winter sun.

A day or two later, resolved to be part of that watery landscape, I walked my kayak to the edge of the East Bank Landing of Columbus Lake and placed it on the water. Nearby, at the east end of the parking lot, two girls, rhythm and blues blasting from their car, took selfies with the lake as a backdrop.

The pool on the east side of the Waterway, though shallow, offers an unexpected diversity of plants and wildlife. There are several islands, at least one of which, had a burgeoning tick infestation on the summer day I visited. They hitch rides to the island on deer, a friend said.

On this afternoon sweet gum adorned in wine red; prehistoric cypress with its russet foliage and magnolia, a tree we expect in cemeteries and the yards of antebellum mansions, are in evidence.

Google "wild magnolia" and you'll get the FaceBook page of a chicken place in Martinsville, Virginia.

Try "native magnolia," and you'll find the following in "The American Gardener," the magazine of the American Horticultural Society:

"Magnolias are the aristocrats of America's native trees, primordial relics thousands of millennia in the making and little more advanced today than at the time of their origin, when dinosaurs still rumbled the earth. Based on the fossil record, they date from at least the Cretaceous Period--135 to 100 million years ago--and some experts believe they may be even older than that."

At the edge of the water, a blue heron stands poised, as if waiting for John James Audubon to happen by with his sketchpad.

At one point I take a photo of a wall of vegetation that seems to shimmer with life. The resulting image is lifeless, and I delete it right away.

In less than an hour, after a circuit around the islands, just as the sun dips from sight, I make for the landing, a bit awed and gratified to have experienced such sublime beauty so close to home.

1. Leonard Pitts Jr.: It is time for us to break our addiction to Trump NATIONAL COLUMNS

4. Voice of the people: Paul Mack LETTERS TO THE EDITOR ([email protected])