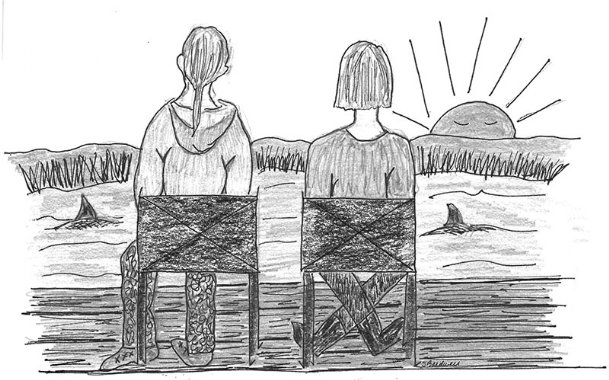 "Then with a switch of his powerful tail the golden carp disappeared into the shadowy water under the thicket."

Life's activities have slowed down and fall has come in all its glory. The weather is mild and the colors are vivid. Late evenings often warrant sitting on the dock of the lake and watching as the day fades away. The Pekin ducks quack loudly until their cracked corn is poured into their feeding tray; then all is quiet. A few fish pellets are thrown out for the bream that are teaming in front of the dock.

On the west side of the lake where the water shallows, the grass carp are milling about lazily. They are in tune with the season. There were times when we hosted friends down by the lake who were unfamiliar with grass carp. The children would squeal, jump, run and giggle, hollering "sharks." The grass carp are large and can grow up to 6 feet and weigh 80 pounds or more. They have a dorsal fin that rises above the water's surface and a swimming pattern that slowly weaves right and left. The size, the dorsal fin and the movement gives the impression of "Jaws." You can almost hear the familiar movie theme.

Grass carp are not native fish and have been released into the lake to manage vegetation growth. Grass carp eat three times their body weight in a day. They typically live five to nine years. They enjoy living in lakes and backwaters. The fish were imported from Asia, where they are called the white Amur, to help manage aquatic weed control. In 1963 they were sent to facilities in Arkansas and Alabama. It's believed some carp were accidentally released in 1966, then intentionally in 1969. They are now found in 45 states.

Grass carp enjoy quiet, shallow waters without much current. They've been observed in the Luxapalila and Tibbee, first in 1978 and the last official report in 2017. They don't typically travel long distances except during spawning migration. Spawners may travel 1,000 miles or more. Grass carp tolerate a wide range of temperatures. Ideal is in the 70s, though they've been known to survive under a covering of ice.

Around here grass carp are not known for being a good eating fish, though some countries raise them for food. There are recipes on the internet for carp stew, carp over rice and, of course, fried carp.

Fishing for carp is a little different since they are grass eaters. One popular bait is a bread "dough" ball flavored with butter, strong smelling cheese, whole kernel corn, even old bananas. The fish, being the size they are, will give quite the pull. There is bow fishing as well. Carp are very nervous fish and will splash hard and turn away from company.

I once came alongside a carp while I floating in a kayak. We drifted side by side; I was close enough to examine his scales. The edges are dark, causing the skin to look like a fishnet covering. Then he slapped his tail and was gone.

2. Leonard Pitts Jr.: It is time for us to break our addiction to Trump NATIONAL COLUMNS

3. Voice of the people: Alice Edwards LETTERS TO THE EDITOR ([email protected])

4. Other editors: 'Keep Tupelo Open' is an excellent campaign for community NATIONAL COLUMNS