Ask Rufus: The Strange Story of the W.H. Gardner 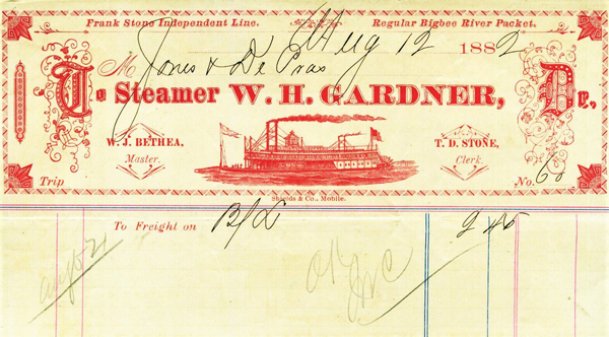 A waybill from the steamer W.H. Gardner that burned and sank near Gainesville, Alabama, with the loss of 22 lives on her way from Columbus to Demopolis in 1887. Photo by: Courtesy image

One of my favorite ghost stories is that of the phantom steamboat, the Eliza Battle. It is a story based on the actual horrific loss of the steamer on the Tombigbee River in 1858. Almost forgotten, though, is the almost as deadly burning in 1887 of another Columbus-Mobile steamboat, the W.H. Gardner.

While I have heard of no ghost story about the Gardner, there are enough strange connections to make it worthy of a Halloween ghost story.

As had been the Eliza Battle, the W.H. Gardner was steaming down river from Columbus to Mobile carrying passengers and hundreds of bales of cotton. The Gardner's captain was Frank Stone who had been second clerk on the Eliza Battle when she burned, and the Gardner caught fire and burned exactly 29 years to the day of the burning of the Eliza Battle.

The story of the W.H. Gardner, like most disasters, is a mixture of heroic efforts to save lives and what might have been. Strikingly, much of her story parallels the story of the Eliza Battle.

The story begins at the Demopolis, Alabama, Tombigbee steamboat landing in late February 1887. The W.H. Gardner was owned by Frank Stone, her captain, W.T. Rembert, her clerk, and Sid Coleman. The Gardner departed Demopolis for Columbus carrying passengers including seven members of Rembert's family on a pleasure excursion. After arriving in Columbus, the Gardner took on passengers for her return trip, 464 bales of cotton from the Columbus Compress Company and additional cargo described as highly flammable. As the Columbus Compress was located about where present day MUW's Carrier Lodge sits on the river bluff just north of the railroad trestle, the Gardner would have docked and left from the Columbus landing at Turner's Cut.

The Gardner left Columbus around 6 a.m. on March 1, 1887, and the trip down river was uneventful until about 3 p.m. when she reached Howard's bar about three miles below Gainesville and 108 river miles below Columbus. There she caught fire, and the news of what ensued spread worldwide. The first report out of Mobile of the disaster was carried on the front page of the Boston Globe on March 2:

"News was received here this evening of the burning of the steamer W.H. Gardner, at Gainesville, on the Tombigbee River. The fire is supposed to have caught in the hold of the vessel, and the cargo, which was largely made up of combustible material, burned like tinder.

Almost as soon as the fire was discovered it burnt fiercely out of the hatchways, cabin windows, and, as it seemed, from almost every part of the steamer at the same time.

When the fire was first discovered, the steamer was in the middle of the river going at a good rate of speed. The wind was blowing freshly, and fanned the flames into a perfect maelstrom of fire which crackled in a frightful manner.

The pilot turned the steamer's head for shore, but so intense was the heat that he was compelled to abandon the helm and let the vessel take her own course.

There were many passengers on board, and the wildest excitement ensued on the deck of the doomed vessel.

The officers vainly endeavored to quiet them and at the same time lower the small boats, but so rapid was the work of the flames that their protestations to the passengers to keep cool were of little avail.

As the flames rolled on the shrieks of the victims on deck became frightful. Some jumped overboard and were drowned, others threw themselves into the water with life preservers and endeavored to reach the shore, while some who were afraid to trust themselves to the water remained on the burning steamer and perished in the flames.

Full details of the awful burning have not yet been received, but it is known that twenty lives were lost."

Soon other details of the disaster began appearing. The Gardner was passing Howard's Bar when Capt. Stone discovered a cotton bale to be on fire. A deckhand attempted to quell the flames by throwing buckets of water on them but got too close and his clothes caught fire. He panicked and took off running through the boat spreading flames everywhere and igniting the combustible cargo stored in the steamer's hold.

Though the cause of the fire was unknown, there were reports the Gardner may have been racing with the Steamer Tally that was also traveling from Columbus to Mobile. Before taking command of the Gardner, Frank Stone had been captain of the Tally. At the time the fire was discovered it was reported the Tally was attempting to pass the Gardner. The Tally attempted to approach the Gardner but was prevented from doing so because of the flames shooting from the stricken steamer.

In response, the Tally threw into the river cotton bales, wooden planks and anything that might float and be grabbed by survivors. She also lowered her lifeboats and sent them to rescue the Gardner's passengers and crew who were jumping into the river. On the Gardner, mirroring what happened on the Eliza Battle, the fire had cut off access to her own lifeboats.

Further mirroring the ill-fated Eliza Battle, The Gardner was in mid-stream and at full stream when the fire broke out. The pilot, W.A. Wilson, tried to make for the shore but the flames had quickly driven the engineers from their post, and no one responded to the pilot's orders. The rapidly spreading fire soon drove Wilson from the pilothouse, and the boat drifted downstream out of control until it lodged in a flooded forest across the river from the bank where the pilot had attempted to land. On the Eliza Battle the tiller ropes had burned preventing the pilot from steering the boat to the riverbank and it drifted out of control into a flooded forest.

With the Gardner ablaze and lodged out of control in flooded woods, all those on board, passengers and crew, could do was jump into the swift flowing cold river and swim for shore. The screams of those poor souls were described as "heart wrenching." In all, 22 people lost their lives. It was reported that of that number, 20 drowned.

Of W.T. Rembert's family on their pleasure trip, his wife, his three children, their chambermaid and his cousin with her two children all died. Of the entire family, only W.T. Rembert survived. They had jumped into the water together but became separated, with two of his children dying as their father tried to save them. Also among the lost was S.C. Blackman of Columbus.

Capt. Stone survived by swimming to shore. It was due to the rescue efforts of the Tally's crew that many of the Gardner's passengers and crew survived.

One of the Tally's crew, its 19-year-old "cabin boy" became the hero of the disaster, and his story appeared in papers across the country, even being carried by that famed paper of the old West the "Tombstone Epitaph." The accounts included this fitting tribute:

"There is still plenty of the stuff of which heroes are made among the American people, black as well as white, and it only needs the emergency to develop it. It is worthy of mention that at the burning of the steamer Gardner last week down in Alabama, a colored boy, Beebee McCaw, saved five lives by swimming ashore with those who precipitated themselves into the water from the burning vessel."

There were other heroes that day, not all of them known. A Black deckhand whose name is now known only to God died attempting to save one of Rembert's children. But for heroes, Black and white and mostly unknown, so many more would have died on that horrible afternoon 133 years ago. It was an afternoon strangely tied to a morning exactly 29 years earlier.

Thanks to Carolyn Kaye for assisting with the research on the W.H. Gardner.

3. Voice of the people: Bill Parker LETTERS TO THE EDITOR ([email protected])

4. Patrick J. Buchanan: What the next president faces NATIONAL COLUMNS