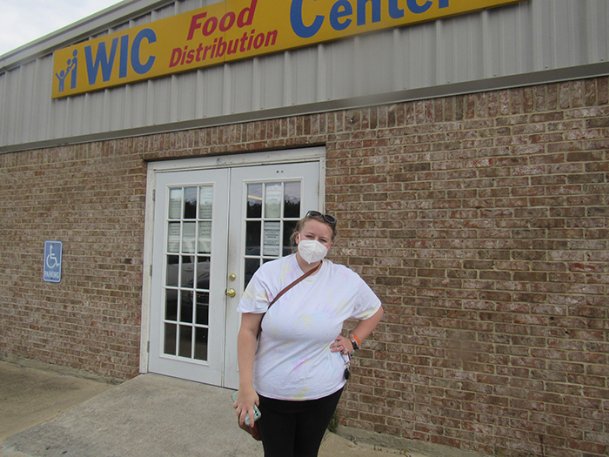 Carli Hankey of New Hope said plans to move the location of the Lowndes County WIC Distribution Center from its current location on Highway 45 to a new temporary facility on Tuscaloosa Road will be more convenient for her. The new location begins operations on Oct. 5, but the stateâs WIC program should be shifted to an EBT-based distribution center by July. Photo by: Slim Smith/Dispatch Staff

The notice on the door of the Lowndes County WIC Distribution Center had some good news for Carli Hankey of New Hope.

Next month, the drive time to pick up her monthly allowance of food provided by the federal program will be cut in half, as distribution moves from the current site near the Columbus city limits on Highway 45 to a new, albeit temporary, location at 930 Tuscaloosa Road.

Pick-ups will end at the current location on Sept. 25 with the new location open for pick-ups on Oct. 5.

"At first, when they announced they were going to close this location we were told we would have to go to Amory or West Point," Hankey said. "That was going to be a real hardship, I suppose. So I'm glad they found another place in Columbus. That will help out a lot."

Hankey has been in the program for about a year, she said, and uses her WIC allowances for baby formula, milk, cereal, fruits and vegetables.

WIC, officially known as the Special Supplemental Nutrition Program for Women, Children and Infants, is a federal program administered by the United States Department of Agriculture designated to serve low-income pregnant women, breastfeeding women and children under age 5.

According to Diane Hargrove, the state's WIC program director, the move was necessitated when the owner of the property declined to extend the current lease, which expires on Sept. 30. Initially, the plans were to direct participants to other locations before the Tuscaloosa Road location was secured.

The new location is a temporary arrangement as the WIC program transitions from maintaining its own distribution system to an EBT card platform, which will allow WIC participants to pick up food items that qualify under the program at regular retailers such as grocery stores or pharmacies.

That's good news, too, said Hankey, one of approximately 1,400 WIC participants in the county.

Originally, the program was to shift to the EBT model by October in all 50 states, but COVID-19 issues have delayed the transition.

"We know this will be a challenge for some of our participants and we are doing everything that we can to supply them nutritious foods the best way that we can during this transition," Hargrove said.

As of now, there is no set time-table for the transition of the state's 95 WIC locations, Hargrove said.

"We'll be converting to that system a few counties at a time," she said. "Our goal is that we will have all counties rolled over into the EBT program by July 2021."

2. Slimantics: Will medical marijuana go up in smoke? LOCAL COLUMNS