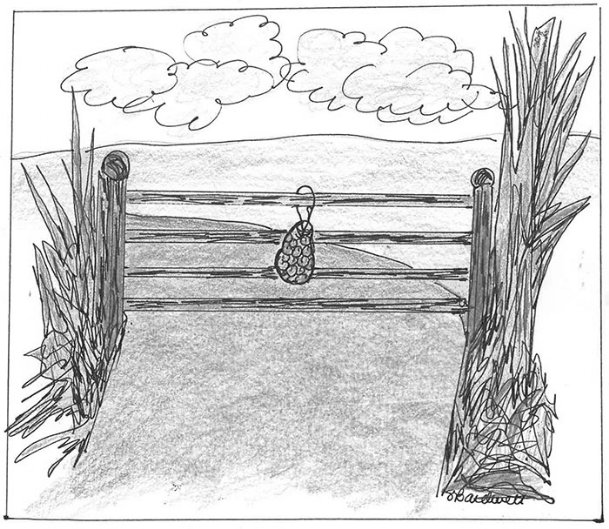 "When I return to my house, I find that visitors have been there and left their cards, either a bunch of flowers, or a wreath of evergreen, or a name in pencil on a yellow walnut leaf or a chip. They who come rarely to the woods take some little piece of the forest into their hands to play with by the way, which they leave, either intentionally or accidentally. One has peeled a willow wand, woven it into a ring, and dropped it on my table. I could always tell if visitors had called in my absence, either by the bended twigs or grass, or the print of their shoes, and generally of what sex or age or quality they were by some slight trace left, as a flower dropped, or a bunch of grass plucked and thrown away ... or by the lingering odor of a cigar or pipe."

Years ago, a neighbor fashioned a loop and hook from a metal coat hanger and affixed it to our gate. The coat hanger has long since rusted. Routinely over the summer, a bag appeared attached to the hanger filled with the best tomatoes you have ever put in your mouth. Like Sam and his fish and Forrest Gump and his shrimp, I was pressed to find ways to utilize the tomatoes. The tomatoes were so good I would often simply eat them unaccompanied. There were tomato sandwiches, sometimes on white bread and sometimes on wheat. Tomatoes were served on salads and in spaghetti sauce, but most went into tomato pies. Tomato pies became a staple of ours several times a week.

Then, a few weeks ago, the bag was left with four tomatoes and a note. "Enjoy. These are the last of the tomatoes." My heart skipped a beat, but like many things homegrown, tomatoes must come to an end. As if my benefactor sensed our loss, two more bags of grape tomatoes were left on the gate. The tiny ones worked to ease the transition.

Over the years other neighbors have generously used the "giving hanger" or the bench or the top of a nearby tree stump. We've found everything from fresh eggs, blackberries and pecans to pound cakes and casseroles left at our gate.

Living somewhere in rural Oktibbeha and Lowndes County for 35 years now, I have found my centering place. Growing up I wanted to be a big city girl, with bright lights, theater, musicals and lots of high fashion. So, I did. I traveled. Then I wanted to come home; so, I did.

At first, I was afraid of cows a neighbor walked down the road every afternoon. I was afraid of snakes, deathly afraid. I feared strange noises at night -- the screech of an owl or a hoot. Now they are sweet sounds and much preferred to the honking of automobiles in the city.

Thoreau wrote, "I am convinced, both by faith and experience that to maintain one's self on this earth is not a hardship but a pastime, if we will live simply and wisely ... I would have each one be very careful to find out and pursue his own way, and not his father's, or his mother's or his neighbor's ... "

2. Voice of the people: Paul Mack LETTERS TO THE EDITOR ([email protected])

3. Voice of the people: Cheryl Arnold LETTERS TO THE EDITOR ([email protected])

4. Froma Harrop: What does it really mean to be pro-life? NATIONAL COLUMNS