Partial to Home: An authentic experience 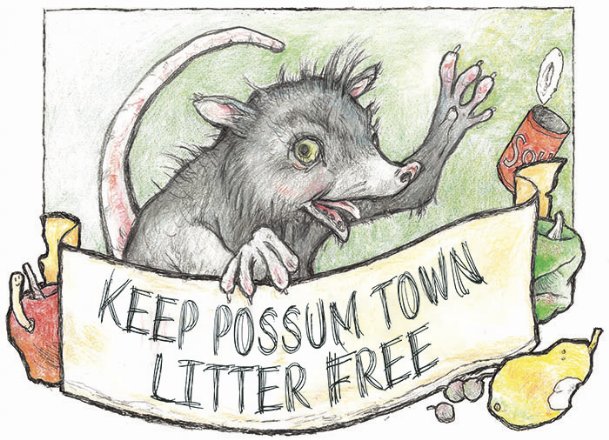 The other day while walking along the entranceway to our fair city carrying two trash bags filled with litter, I happened upon an empty Dr. Pepper can.

As I reached for the can, I noticed the number 23 on its side.

Encircling the 23 were the words, "An authentic blend of 23 flavors."

Not to be confused with, "A blend of 23 authentic flavors."

I expect, but don't know for sure, most of those 23 flavors are made in a lab and are unpronounceable, that is to say, far from authentic in the natural sense.

Still, you have to admire the marketing genius behind the slogan.

Our critical thinking skills are put to test with every trip to the grocery. "Made with natural ingredients" is virtually meaningless. That and what else?

Once a week we meet friends to pick up trash in the downtown area. While the constancy of litter is discouraging, being out in fresh air in the early morning with friends is refreshing.

Occasionally there is treasure. Several weeks ago I retrieved a waterlogged notebook that detailed in a girlish script the company policy of a certain hair salon. Why I didn't bring it home for further study, I don't know.

Bush hog a styrofoam cup and you have a small snow storm.

While I was picking up snowflakes, I thought about Leonard Cohen. At 61, after years of worldwide acclaim and copious amounts of sex, drugs and rock and roll, the revered singer-songwriter entered a Buddhist monastery in California.

There for five years he scrubbed floors, prepared meals, washed dishes and meditated.

Cohen described the experience as voluptuous and delicious.

While those aren't the first adjectives I'd reach for in describing our litter-picking-up experience, there were moments approaching transcendence.

Take, for example, the grassy triangle at the southwest corner of the Main Street exit. The area is flat; the grass was freshly cut, and growing in the middle of the space is a small stand of sycamores, magnolias, cypress and oaks.

This beautifully manicured scrap of land could be in a corner of London's Hyde Park or on the grounds of Downton Abbey, yet here it sits barely noticed as cars roar by on all sides.

As you are filling your garbage bag, the question runs through your mind, why do people desecrate the landscape like this? It's so easy to put trash in the floorboard or in a plastic bag and then dispose of it later.

Afterward I asked my companions when it occurred to them littering was not the thing to do. They all credited the "Don't Be A Litterbug" campaign of the 50s and 60s. And, as is the case with so many of our habits, good and bad, they learned from their parents, who did not litter.

I wasn't so enlightened. When I left for college, I was still mindlessly throwing things out the car window. I did so en route to Cade's Cove in the Smokies one afternoon, prompting my companions to dub me, "Mr. Ecology." I got the message.

Sometime ago I wrote here about the Instagram posting #Trashtag where people photograph a litter strewn area before and after they picked it up. A year ago a fellow named Byron Roman challenged "bored teens" to take up the #Trashtag challenge. His challenge was reposed 323,000 times on Facebook and resulted in clean-ups around the globe.

Though we find ourselves in more complicated times, wouldn't it be great if we as a community embraced a similar challenge. Social distancing is easily maintained on a litter patrol.

I'm sure the experience would be 100% authentic.