Possumhaw: Of fowl and fawn 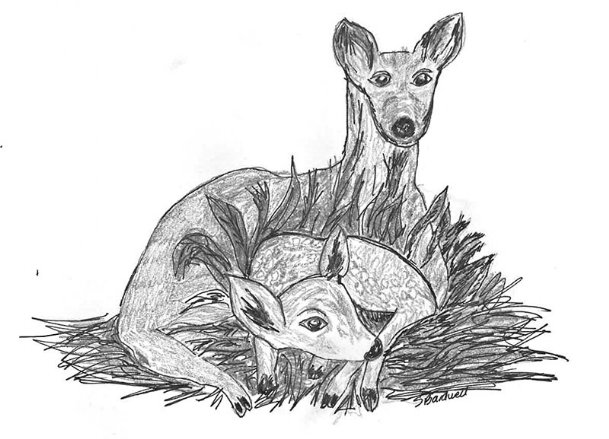 "This world is a beautiful world. Oh how complex has it been made by us. Just look at the bird soaring in the blue sky. Does it even care?"

Truly, for all the troubles we've had as a country and community, there's still a beautiful world out there. While sheltering at home we've built flower beds and tended to them better than ever because we've had time on our hands and dirt under our fingernails. I've gathered flowers, both purchased and wild, and fashioned them into something to smile about. We've watched the moon wax and wane and the stars twinkle in the night sky. Lightning bugs have graced our treetops. Rains have filled our lakes and birdbaths and watered our grasses. Birds have flittered and fluttered in the baths. Our daily news announces a new gardenia bloom. Through wind and rain, we've had a fair number of fallen limbs as well as a couple of dying trees.

Midmorning, while Sam tossed fallen limbs into the woods, he was startled by the presence of two very small fawns staring at him from a few feet away. They began to do their happy dance. Apparently, fawns will dance a jig when they see their mother. Sam talked sweetly to them then moved away. The mother deer tucks the fawns away during the day while she forages for food. She returns at evening; they nurse immediately. Thirty minutes after they are born, they can stand and nurse. Our fawns must have been newly born judging by their tiny size, wobbly legs, and the fact they were still together. For protection the mother deer will usually separate her twins and hide them in different places. At birth a fawn will weigh 6 to 8 pounds and have up to 300 spots. After three or four weeks, the mother will reunite her twins. The fawns are weaned around 10 weeks but may continue to nurse for nurturing more than nutrition. A few days later we saw one fawn standing on its little spindly legs watching and unafraid. We think we've spotted the mother a time or two. I left pears for her as a sweet gift.

While the deer roam the woods, four black-bellied whistling ducks have taken up residence at the lake. One pair seems to guard the wood duck box while the other lines the shore or perches on the stumps or a scraggly bodock tree in the middle of the lake. Black-bellied whistling ducks are known for their friendliness and social acceptance of humans. They are funny in appearance -- a long bright red-orange bill, a black belly and tail, white under the wing, and the rest gray and soft brown. They have a long head and lengthy legs and make a clear whistle sound like "waa-chooo."

Black-bellied whistling ducks are welcomed to the lake. They do not eat fish but forage for seeds and plants in the water and nearby fields, occasionally taking in an invertebrate. The ducks are considered non-migratory and monogamous. Both parents tend to their young. I like that.