Possumhaw: Save the fish; protect the turtle 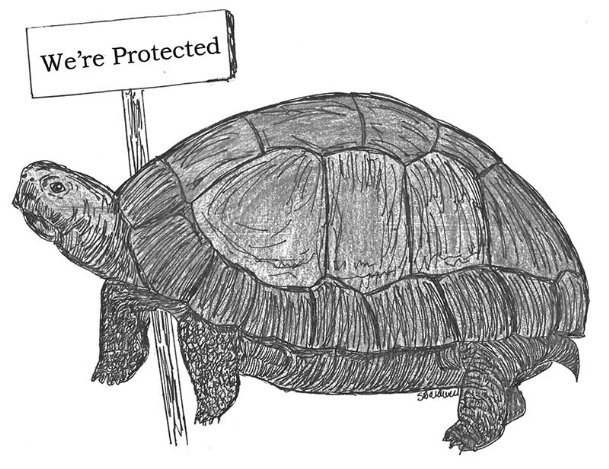 "And the turtles, of course, all the turtles are free as turtles and, maybe, all creatures should be."

From the breakfast table I could see Harry, the boy cat, peering through the picket fence into the perennial garden. You would think by now whenever Harry is transfixed on something, I would check it out. Instead, I finished my breakfast. The last time I watched Harry transfixed on something he laid down beside what looked like a gray dinner plate, maybe a tad larger. The gray plate turned out to be a coiled water snake. Harry had been flipping the snake through the air, as Harry does, and both were worn out. I pitied the poor water snake. About cats, I've noticed some cats prefer rodents and fowl while other cats prefer reptiles and amphibians -- Harry being the latter.

Gathering up my basket of greens for the rabbits and food for the goldfish, I headed out for the morning feeding. The goldfish pond is inside the perennial garden. I entered the greenhouse and passed the goldfish pond when, at that moment, there was a large turbulence in the water. Something entered the pond. Moving closer, I saw the back of a large turtle. I grabbed a shovel and tried to lift him out of the pond, but the turtle was bigger than the blade and too heavy for me to have leverage.

Pitching the shovel, I took off toward the boatshed for Sam's fishing net. On my return, Sam joined me running across the yard while asking, "What's going on?"

I explained as I ran, "A turtle is in the goldfish pond. He'll eat my goldfish!" Sam took the net and leaped ahead of me. It's not easy running in rubber boots.

The pond was now muddied. Vision was limited between the turtle thrashing and the goldfish cowering. Sam quickly netted the turtle while accidentally simultaneously capturing the blind goldfish. He attempted to slide the goldfish out unsuccessfully as I hollered, "Grab the fish!" Sam did and eased the fish back into the pond. Afterwards Sam hauled the netted turtle away and dropped him in the yard away from the garden.

I don't know why or how the turtle would find his way through the fence and into a small goldfish pond. I don't even know if perhaps I startled him and he fell into the pond. I continued my chores, grateful my fish were safe. Sam had gone with the net and all was well, until I turned and there was the turtle making his way back to the garden.

Grabbing an empty bucket, and almost without stopping, I ran through the yard, scooped him into the bucket and headed to the lake. He didn't move but looked up at me almost with sad eyes.

At the lake I eased him out on the mudflat where he scurried happily to the water and swam away.

Looking up Southeastern turtle identification, I think he might have been a Mississippi map turtle, possibly a slider. By the way, turtles are protected as an important part of the ecosystem. Pond turtles are sold on the internet, prices ranging from $89-$250. Doesn't that just beat all?