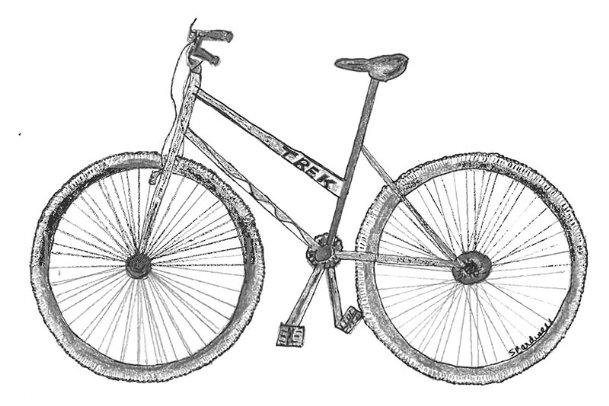 "Toleration is the greatest gift of the mind; it requires the same effort of the brain that it takes to balance oneself on a bicycle."

Out came the bicycles, having been in storage for about six to eight years. Sam aired up the tires and checked over the bikes' mechanics. They were maybe a little dusty and a little rusty. We wiped them down and decided to take a short spin. Our gravel road with two hills is not a pleasant way to start out a bike ride, so we loaded the bikes into the truck bed and found a paved road. The agreement was we'd start out slow and not ride far. The last time we took the bikes out we tackled our ride too fast and too long and haven't tried it again until now.

Sam took a quick spin on his bike and I attempted to mount mine, but with the first complete spin of the wheel the bike stopped; I almost lurched over the handlebars. I tried it two more times with the same results. I hollered at Sam and asked him to come check my bike. The wheels moved freely until the wheel was turned left. The bike abruptly stopped.

Turns out the handlebars were turned around 360 degrees, and when the wheel turned left the line to the brake tightened and activated. OK, well it had been a long time, as I mentioned. We flipped the handlebars around and took off. We rode through a subdivision with perfectly manicured lawns. The neighborhood was utterly quiet and with no movement except for one lady pruning her roses. We rode a long connector road from the subdivision back to our truck for an altogether nice outing. The weather was perfect, cool, a bit breezy and sunny.

The next ride was at the west bank of the Tenn-Tom Waterway. Again, we saw only one vehicle and it parked while the occupants viewed the river. Along our route a gaggle of geese were feeding in the grass with their goslings. Before we left, the momma geese herded the offspring back to the river.

The third day out we parked in a parking lot and followed a long and winding road sided with trees and fields. Up ahead was a man walking his dog alongside a cemetery. Sam whizzed on by with no problem. I was a fair distance behind Sam and, when I reached the man and the dog, the German shepherd charged. I stopped motionless.

The owner quickly grabbed the dog's harness while the Shepherd continued to pull against him. The man was wearing a mask. I wasn't, so I apologized. The meeting was unexpected.

The man also apologized, saying, "I thought there was only one biker."

I remained still. The dog pulled. My heart beat a little fast as I continued looking at the dog. His teeth were bared as he strained at his harness. Mostly I was awed. If he knew me, he'd love me. I'm an animal person.

Eventually I was able to move on and all was well. Having met with the dog, we decided to take the long way home, only to discover once again -- there's no place like home.