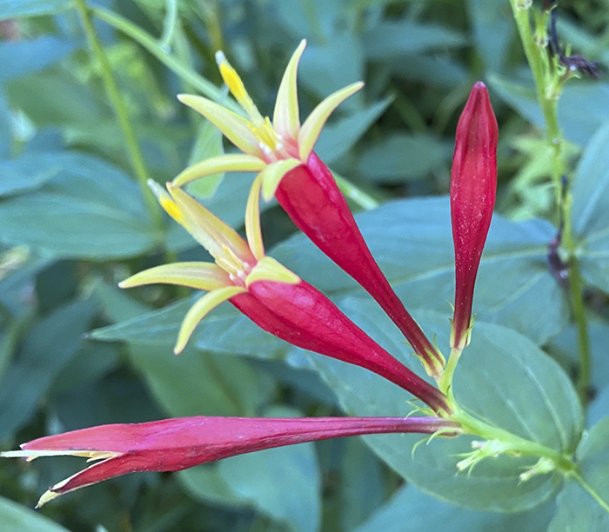 Around this time a year ago, a friend and I were walking in a Noxubee County woods.

The leafy canopy above had turned the forest into an echo chamber for the trilling of birds. The dappled light it permitted played across what seemed infinite hues of green. Signs of spring were everywhere.

We passed red buckeye, an early spring attraction for hummingbirds and bees, which had begun to shed its red, tubular blooms.

Suddenly my companion stopped abruptly, his gaze transfixed by something at his feet. Had he happened upon a snake?

There before him was a clump of brilliant red flowers unlike any he'd seen. Like the buckeye's blooms, these were trumpet shaped and deep red, but these were different: These had a small, bold yellow star at their tips.

The small, jewel-like flowers, set against emerald-green leaves, seemed out of place on a muddy forest floor littered with decaying trees.

This was akin to walking across a rocky hillside in, say, Wales, and finding a crown lying in the grass.

Yet there they were, clumps of the stuff scattered about, happily radiating beauty in a forest rarely visited by humans. But for us, chances are the flowers would have bloomed and faded unseen, just as nature has and will do before and long after we're gone.

Last week, I returned to the same forest to find the same flowers, only more of them.

They're commonly known as Indian Pink.

When I mentioned this to gardening guru, Linda Spearing -- in case you think the "guru" moniker hyperbole, cruise by Linda's house on Sixth Avenue South between Seventh and Eighth streets and have a look at her cottage garden, now in its glory -- she said, "Oh, I know were some of this is."

Whereupon Linda got in her truck and ordered me to follow her.

There, arching out over the sidewalk amid roses, spiderwort, iris and several wayward oaks, were two healthy clumps of Indian pink.

A couple days later, on a rainy Friday afternoon, I returned to the house.

Unsure of cold-call protocol in these COVID-19 times, I crossed the porch, knocked on the front door and retreated to the yard and the misting rain.

Had I known this was the home of Kim Whitehead and Kendall Dunkelberg, both English professors at The W, I would have done this with less trepidation.

Kim answered the door. She responded to my question about the Indian pink as though she were expecting it.

"We've had so many people admire it over the years," she said.

The flower was growing by the drive when they moved in 21 years ago, she said.

Kim has successfully transplanted sections of it to the beds on either side of the front entrance to the house and given clumps to neighbors Joyce Hunt and Annis Cox.

The plant is delicate and not easily transplanted. At least that's been my experience. It seems happy growing on a damp, shaded forest floor unnoticed.

How did this rarely seen and somewhat exotic native plant end up growing alongside this Southside driveway? Kim doesn't know.

"We have loved that plant over the years," she said.

While it's still blooming I encourage you to cruise by Kim and Kendall's house (517 S. Fourth St.) and have a look at the small, jewel-like flower now blooming (but beginning to fade) at the edge of their driveway. You might just fall in love yourself.