Possumhaw: It takes a village 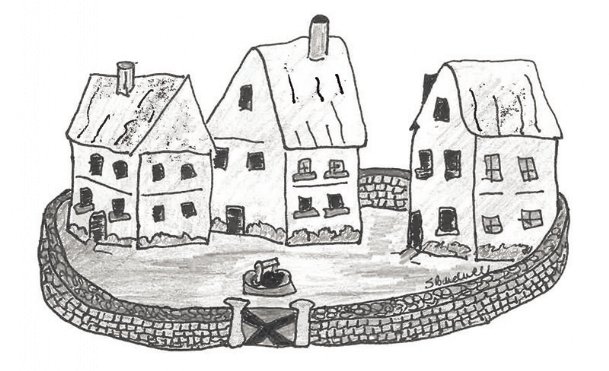 "If it means anything at all, you almost feel responsible to do something to remember it."

Searching for quotes on bravery, self-sacrifice, maybe courage, I stumbled into the Derbyshire village of Eyam, England, in the year 1665. English villages fascinate me as I now have a friend living in one and follow a blogger living in another -- quaint cobblestone streets, outdoor markets, small brick homes with flowering window boxes and bucolic pastures, home to grazing sheep. Geraldine Brooks wrote "A Year of Wonders," about Eyam. Brooks is an Australian-American historical fiction writer and a Pulitzer Prize winner.

Brooks' book is based on a plague in the village of Eyam, England, in the 17th century. The truth of the village and what happened there drew my attention.

In 1665 the Bubonic plague, also known as The Great Plague of London and considered one of the five worst pandemics, was ravaging the city. A hundred and sixty miles north of London was the quiet village of Eyam. The town was preparing for a religious festival and the villagers were ordering new clothing for the occasion from the local tailor. A shipment of cloth arrived from London, though slightly damp. The tailor's assistant, George Viccars, warmed the bolt by the fireside. Unfortunately, the London cloth housed carrier fleas which were released by the warmth of the fire. Within the week Viccars died.

The townspeople had no idea how the disease was spread,but it did appear possibly human to human contact. An Eyam resident, Elizabeth Hancock, lost her husband and her six children. However, she never contracted the disease. Some grave diggers also did not contract the disease. There was at least one grave digger who stole from the deceased. While he did not get sick, his family did and it was suspected the plague was transferred by handling the stolen objects.

Eyam's favorite rector, Thomas Stanley, had been removed from office by officials in London over a political issue. He was forced to live in solitude at the edge of the village. The replacement rector, William Mompesson, was not popular. After the village seemed to be dying off, the remaining villagers planned to flee the village. Mompesson called the villagers together to propose Eyam set boundary stones in a mile radius around the village allowing no one in and no one out. His proposal would in effect sacrifice the villagers but spare the surrounding trade villages of Sheffield and Bakewell where thousands would die. Mompesson enlisted the support of Stanley, who by their religious faith believed quarantine to be the right thing to do. Remarkably, the villagers agreed.

Nearby villages sent food and left it at the boundary stones where the people of Eyam laid gold coins soaked in vinegar, thought to disinfect, in exchange. Worship services were held in the open, residents camped in the hills, families buried their own. By 1667, the quarantine was over. The plague had not spread beyond the town. In all, 540 of approximately 800 villagers had survived, as had the thousands in neighboring villages.