Partial to Home: Too close for comfort 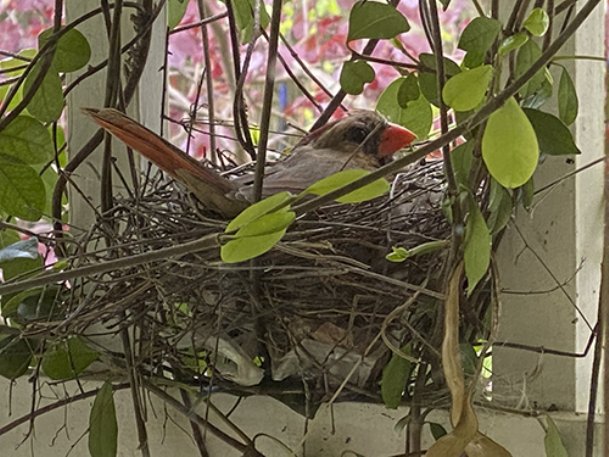 TUESDAY, MARCH 31 -- The newest member of our household is under a self-quarantine. Eleven to 13 days. She just flew in and is not taking any chances.

She's a northern cardinal and has made her nest about a foot from our backdoor.

Thanks to our new tenant we are now coming and going through the kitchen window, I told our granddaughter.

We're doing our best not to spook the nesting mother-to-be, but with cats, a gallivanting little dog and our comings and goings in the kitchen, I'm worried.

The nest, situated in a trellis entwined with Savannah jasmine, has taken shape over several weeks.

According to the excellent Cornell Lab of Ornithology website, cardinal males usually bring nesting material to the female who does most of the building.

"She crushes twigs with her beak until they're pliable, then turns in the nest to bend the twigs around her body and push them into a cup shape with her feet. The cup has four layers: coarse twigs (and sometimes bits of trash) covered in a leafy mat, then lined with grapevine bark and finally grasses, stems, rootlets, and pine needles."

The nest construction normally takes from three to nine days. This one seems to have taken longer.

Once, on an island in the Tenn-Tom near Waverly Landing, I happened upon a duck blind made of bamboo that rivaled the bird nest in ingenuity. Likely the outdoorsman had more tools at his disposal.

Yesterday, walking out the back door, I had noticed what looked to be a leaf or part of the vine on top of the nest and reached to move what turned out to be the nesting mother.

She's a beautiful brownish red with an orange beak. I immediately took her picture with my iPhone.

She sits motionless for hours. When she leaves to stretch her wings, it's usually into a nearby redbud, its reddish spring leaves a perfect match for her. Her devotion is inspiring. Would it be that we humans could emulate her.

I'm worried though. Earlier this morning, I went to the door to shoo away a hungry, mewling Miss Prissy. I peeked over into the vacant nest to see a single cream-colored speckled egg.

For the Northern cardinal the normal clutch is two to five eggs.

Is a solitary egg incentive enough to keep her nesting amid the chaos for the 11 to 13 days it takes to hatch?

"She's not going anywhere," Dispatch supervisor Tom Hudson said after I showed him the nesting mother from the kitchen. "You can't get her off that nest."

Paul is reassuring, saying the female only lays one egg a day and often waits until she's done laying before taking her seat. That way the eggs all hatch near the same time, he said.

Though, he cautioned, she may be a young, inexperienced mother, and it may not work out the first time.

It is now Thursday and she's not returned to the nest.

We're now using the back door again. Each time I pass the nest, I stand on my tiptoes and peek at the lone untended egg.

Birds abandon their nests when it appears to no longer be safe, according to an internet source, when "the parents have seen a potential predator -- a cat or a human -- lurking nearby."

We, the cats and I, did more than our share of lurking.

All is not lost. The pair of cardinals has not left us. They're still frolicking in the backyard with a host of other songbirds. Paul says it's quite likely they will nest again this spring. If they do, I expect they'll pick a less conspicuous spot.

In the meantime, we're keeping the feeders full and enjoying the pre-dawn symphony these little winged miracles offer each morning.