Marion Whitley: A 'drop by' visit 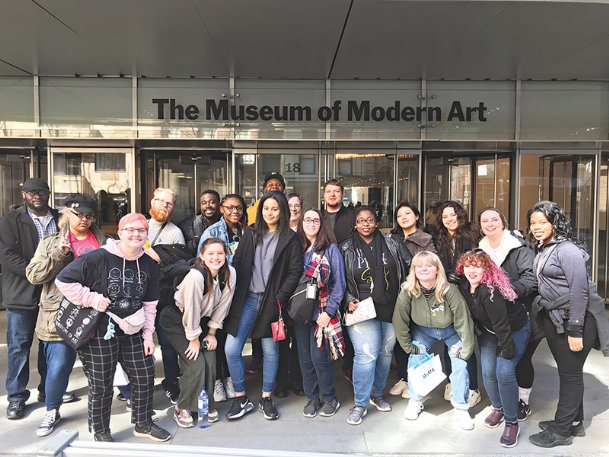 When you're told, "Yes ma'am, I live in Columbus, but I was born in Caledonia," you have a "Me Too Moment" like no other! (This quote comes from within a group of "W" Art Students in New York to visit the museums and art galleries, and to participate in street life of The Big Apple. For one hour, however, they became the largest group ever to gather at my house over here near the East River. Twenty in all, plus art instructor Ian Childers and my cousin Clara, through whom a true "drop by" visit was negotiated.

She's long been part of the art scene at The W, now, again, as a student. As such, she joins the group for each day's tour, but spends evenings here, unwinding and entertaining me with adventures of her day "at class."

Well and good, but hearing their names, their responses to art treasures outside books, I was becoming a mite... jealous? When told of one student asking (as he scanned the skyline on Fifth Avenue), "So, what's in all these?"

"Nothing special", he was told, "just apartments where folks live." (My apartment is not on Fifth Avenue, but I took the answer to his question as my cue, and went to bed with a brazen idea.)

I'm an apartment dweller who "just lives here." And if a wall of apartment buildings could prompt the guy to ask, "So, what's in all these?" could my modest building somehow qualify, (all logic aside), as visit-worthy? If so, might I invite students of art to drop by?

(What was I thinking? All twenty?) They're on a strict, exhausting schedule for which they're earning credits! A casual "Drop by if you're in the neighborhood" would be insincere. Leave it alone! On the other hand, suppose they'd welcome a break, a sit-down, a slice of pizza and a coke ... No, no! Go to sleep!

With morning coffee in shaking hand, I asked Clara her opinion of the "drop by" notion ... nothing arty about it, just a peek into lives of those of us who live here, running the stores, driving the taxis, teaching the children, keeping street life flowing. Still on her first cup, she listened, nodded, swallowed and said she'd mention it to Ian.

And so our days began, hers with art students, I to the TV for an update on the Coronavirus: Mississippi, reporting no victims (at the time)... and politically, leaning toward Biden. Then in sweat pants and pull-over, I climbed out to wash my first floor windows before tackling a make-do dinner plan. I got as far as "pick up French bread," when...

Too soon for what?

The "drop by" visit.

Well, Ian thinks today might be the best chance, and we could be there in an hour.

Funny how energy surges at hearing, "We could be there in an hour." I dashed out, in window washing wardrobe for plates, cups, napkins, a liter of Coke and another of something orange. Across the avenue I placed an order for three of Sophia's biggest, round pizzas, 'cause the "drop by" visit was ON! I hurried in, grabbed the doorman to put him on alert for the imminent arrival of guests:

T...wenty? (He drew the number in the air.) You need extra seating?

No, no problem, it's just for an hour and they're students, they'll ...

(He pantomimed the height of a 10-year-old.}

No, no, grown up art students. From my college in Mississippi.

Very good, Miss, I buzz you.

And Clara, bless her, was already on hand. Together we transformed 'guest facilities' into an extended living room, shoving bolted suitcases under coffee tables, and camouflaging the fold-down bed with a bold-striped quilt creating the illusion of something to sit on. In the kitchen, to clear a surface for serving, a dish drain rack disappeared neatly into the oven, as did a loaf of French bread into the dishwasher. The clock was ticking, and with it a niggling thought: "Company is coming! I'm still in window washing garb and nary a smear of lipstick!"

And so it came to pass ... Chris buzzed to announce my guests though Clara was already announcing names as each came through. There was barely time for a handshake before they scrambled for a place to sit. I knew the feeling. They'd been touring all day in Brooklyn and were no sooner seated than invited to line up for "a slice" when a nap might have had more appeal. Hometown names rang distant bells, but which bell attaches to whom? Which name to which hairdo? In the low cloud of surrounding sounds I hear Ian announce "time to move on."

Though they had pled fatigue, their tired eyes lit with enthusiasm for The W's art department. Still to come? A day touring the Art Galleries of Chelsea. (Perchance to fast-forward, and see your own works hanging there?)

The "drop by" was over before it began, and though Clara made it happen, I was privileged, in one hour, to shake hands with 20 touring art students from my alma mater! As I write they're on the train back to Tuscaloosa. First impressions are still settling into memories of the Metropolitan where they'd have liked more time, of the Guggenheim lady explaining a video of the cow. The Oculus? Didn't get there? What is it anyhow? A train station with folding wings? Next trip.

Marion Whitley, who grew up in Caledonia and Columbus, lives in Manhattan where she reads, writes and remembers. Her email address is [email protected]

1. Ask Rufus: A Walk Through 200 Years of History LOCAL COLUMNS

4. Voice of the people: Kerry Blalock LETTERS TO THE EDITOR ([email protected])

5. Possumhaw: What you can, while you can LOCAL COLUMNS