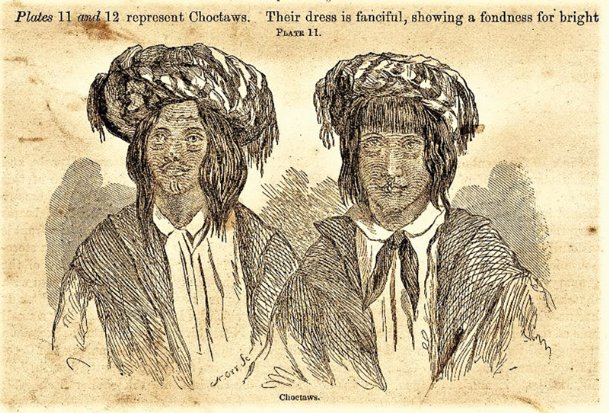 Portraits of Choctaws published in 1856. Photo by: Courtesy image

A fascinating article on the Choctaw account of creation was written by Rev Alfred Wright, a missionary at Mayhew, for the Missionary Herald and published in the July 2, 1828, Cherokee Phoenix of New Echota, Georgia:

Their Traditions respecting the Creation of the World and of Men

The Choctaws state that, at a remote period, the earth was a vast plain, destitute of hills, and a mere quagmire. The word, which they use to express this primitive state, is applied to clotted blood, jelly, &c., which will serve to explain what their ideas were. The earth in this chaotic state, some of them suppose, was produced by the immediate power of the Creator; but others, indeed the majority with whom I have conversed relative subject, have no knowledge how the earth was produced in this state; nor do they appear ever to have extended their thoughts so far as to make a single inquiry with respect to it.

While the earth was in this situation, a superior being, who is represented to have been in appearance as a red man, came down from above, and alighting near the centre of the Choctaw nation, threw up a large mound, or hill, called in their language Nunih waiya*, "stooping or sloping hill." When this was done, he caused the red people to come out of it, and when he supposed that a sufficient number had come out, he stamped on the ground with his foot. When this signal of his power was given, some were partly formed, others were just raising their heads above the mud, emerging into light, and struggling into life, all of whom perished. The red people being thus formed from the earth, and seated on the area of the hill, their Creator told them that they should live forever. But not understanding him, they inquired what he said, upon which he took away the grant he had given them of immortality, and told them they would become subject to death.

After the formation of man from the ground, the hills were formed, the earth indurated, and fitted to become the habitation for man. The hills they suppose, were formed by the agitation of the waters. While the earth was in its chaotic state, the waters are represented as having been thrown into a state of great agitation, like that of a boiling liquid, and being driven by violent winds, the soft mud was carried in various directions, and being deposited in different places, formed the mountains and hills which now appear on the face of the earth.

When the Creator had formed the red people from the ground, and fitted the earth for their residence, he told them earth would bring forth spontaneously the chestnut, hickory nut, and acorn for their subsistence. Accordingly, the Choctaws state, that in ancient times, they lived principally upon these productions of the earth. And they suppose it was not till sometime after they had been a people, that the corn, which now forms no in-considerable part of their food, was discovered by means of a crow.

They state, that at their first creation both males and females went entirely naked. After some time, though from what cause they do not know, they began to use some covering. At first, the long moss which abounds in southern climates, tied round their waists, formed their only covering. At some later period, after the invention of the bow and arrow, when they had acquired skill in hunting wild beasts, they began to use the skins of animals or clothing.

Nunih waiya - I am not able to give a description of this place, having never seen it. I regret that I am not. It is said to have the appearance of being the work of art. Its summit is level, containing an area of several acres. Near the centre is a hole, whose depth had never been ascertained. Out of this hole, according to their ancient traditions, the Choctaws originally came.

While the Rev. Wright never visited Nanih Waiya, in an 1848 conversation, George Gaines related to Albert Pickett an incident that occurred in 1810 on an occasion when Gaines (then the U.S. Factor at the Choctaw Trading House) rode by the mound with Pushmataha and several other Choctaws. Gaines explained that, "The mound was called by the Choctaws Nana (hill), Wyah (mother) and according to their tradition was the mother of the whole tribe, out of whose hole in the top, their ancestors sprung up suddenly one day." He also related that, "On their journey Pushmatahaw discoursed much upon the subject of Indian traditions and said that the true account was that the Choctaws originally came from the West."

1. Ask Rufus: A Walk Through 200 Years of History LOCAL COLUMNS

4. Voice of the people: Kerry Blalock LETTERS TO THE EDITOR ([email protected])

5. Possumhaw: What you can, while you can LOCAL COLUMNS