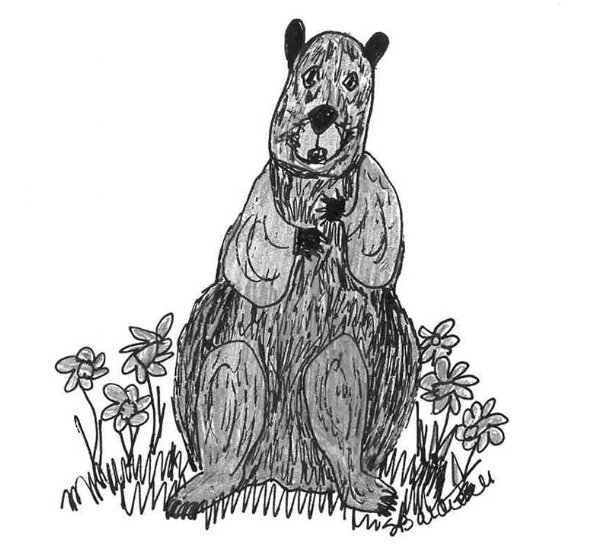 "Old groundhog stretched in his leafy bed. He turned over slowly and then he said, 'I wonder if spring is on the way. I'll go and check the weather today.'"

A little over a week ago I was headed to town when I spied a funny creature sitting on his hind legs beside a road running along the Tombigbee River. At first, I wasn't sure what the critter was. He was brown, furry and looked somewhat like a large squirrel. Then I realized it was a groundhog, only the second I've ever seen. Perhaps that day he was practicing to see if he'd see his shadow, as Groundhog Day was fast approaching. Groundhog Day is always on Feb. 2, and this past Groundhog Day Punxsutawney Phil did not see his shadow. The prediction is that we will have an early spring, which may also be predicted by the warmer temperatures and massive displays of daffodils.

A few tidbits on groundhogs: They are also called woodchucks, whistle pigs and land beavers. I figure the whistle pig is because they make a high-pitched, shrill sound to alert groundhog neighbors of approaching danger. Groundhogs burrow in extensive, elaborate burrow systems and spend most of their lives underground. They are known as nuisance critters as they are quite efficient at digging, be it in your yard or under the garage.

The poor fellows only live three to six years in the wild. Turns out predators are hawks, foxes, coyotes, bobcats, dogs, humans and motorized vehicles. We have all of those here in the Prairie.

Speaking of predators, one night I heard loud and clear the howls and yips of coyotes. The cats, Harry and Wilhelmina, were outside. I bolted out the door, cupped my hands over my mouth, and yelled, "You better get out of here!" It was so loud the echo reverberated. Sam stepped out and said I was probably waking the neighbors two miles away. Then all went silent.

Groundhogs eat vegetations and love the sweet taste of fruit like cantaloupe, peaches, strawberries and corn, as well as peas and string beans. A gardener's nightmare. They are called "diurnal" creatures since they come out in early mornings or late afternoons. They can climb and swim. In very cold climates they hibernate and live off their fat reserves. Litters are usually two to four kits, and they stay with their moms for two months.

3. Voice of the people: Robert Smith Sr. LETTERS TO THE EDITOR ([email protected])

5. Possumhaw: Something to talk about LOCAL COLUMNS