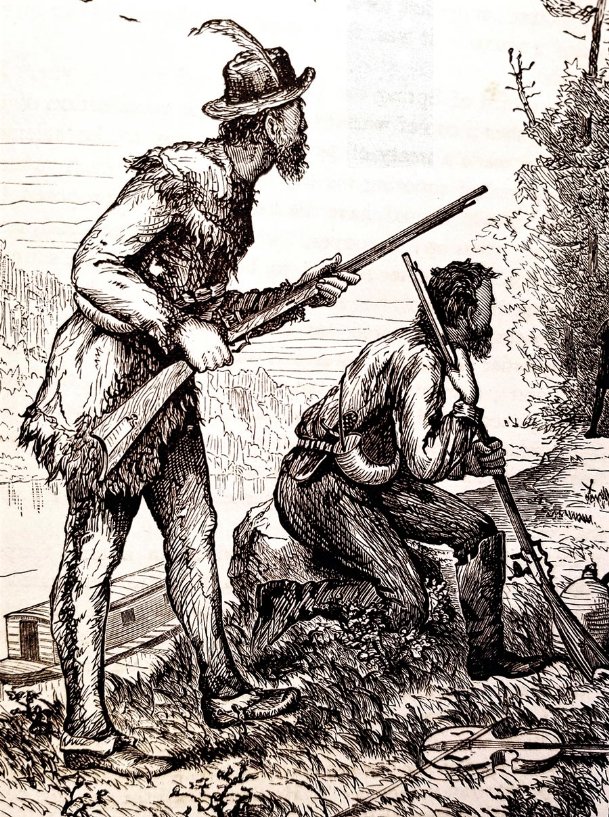 From the 1790s into the mid 1830s, robbers referred to as land pirates terrorized the roads and rivers of the Old Southwest, which then included Mississippi. Travelers on both the Natchez Trace and the early 1820s Robinson Road from Columbus to Jackson were warned to never travel alone or with strangers. Photo by: Courtesy image

The headline in Friday's Dispatch read "A Pirate Comes Ashore," referring to Mike Leach's arrival in Starkville on Jan. 9 to become Mississippi State's new football coach. Also, on Jan. 9 -- but in 1836 -- The Natchez Daily Courier ran a notice that "The Western Land Pirates" had arrived at the Natchez steamboat Landing.

The "Western Land Pirates" was not a football coach but a bestselling book about thieves, robbers and slave traders, known as land pirates, who operated along the Mississippi River and roads such as the Natchez Trace.

It was along the early roads of Kentucky, Tennessee, Alabama and Mississippi that the most famous of these robbers spread their terror. An 1841 Yazoo City newspaper tells of an individual traveling from the Jackson area to Tennessee who traveled north through Holmes County rather than up the more direct routes of the Natchez Trace or Robinson Road. He had been warned of land pirates on those roads and told not to travel alone.

The more famous of those outlaws of the 1790s through the 1830s included the Harpes, Mason, Murrel and Copeland. In the 1790s, Big Harpe and Little Harpe terrorized the backwoods of Kentucky and Tennessee. Silas McBee, who moved to the future site of Columbus in 1817 and suggested the name of Columbus for the town, was a member of the Kentucky posse that captured and killed Big Harpe in July 1799 after he had murdered a mother and child. Harpe was wounded during the chase, and a member of the posse then killed him by cutting off his head using Harpe's own butcher knife. The head was stuck in the fork of a tree, as a warning to others on the road crossing at Robertson's Lick, Kentucky.

Rather than exploring stories of these famous land pirates, there are several little known stories I will tell. As to those famous outlaws, "The Western Land Pirates" published in 1836 has been reprinted and is also available online. My favorite is Robert Coates' "The Outlaw Years" published in 1930. But these untold stories are found in old Mississippi newspapers from the early 1800s.

In 1826, Hugh Marshall of "Cahawba, Alabama," was robbed near Hamilton, Mississippi, and posted the notice of a $500 reward in Natchez newspapers. Marshall stated the reward was: "For the apprehension of a man who called himself Williams, who did, between the 20th and 25th of February last, in Monroe County, (Mis.) near the town of Hamilton, commit a robbery upon the undersigned; and further, attempt, in the most cruel manner, to take my life, by shooting a ball from a pistol, which lodged in my breast, and fracturing my skull so that he left me for dead... I will give the above reward to any person who will apprehend the said villain who committed the said crime, and secure him in the nearest safe jail to the county of Monroe, Mis where the offence was committed, so that he may be punished for the said crime."

Of all the crimes that I came across in my reading old newspapers, the most interesting and unusual was the robbery of a branch of the Bank of Mississippi in 1824 in Port Gibson. It was a crime worthy of a Sherlock Holmes story.

The account in the May 27, 1824, Port Gibson Correspondent began: "Sometime between the night of Saturday the 22nd, and monday morning the 24th inst. The vault of the Branch bank, of the state of Mississippi at this place, was mysteriously entered, and 16 bank notes taken therefrom, amounting to 695 dollars. All the fastenings both of the vault and the banking room seemed to have remained untouched, and but for a small paper of value having been misplaced by the perpetrators of this villainy, perhaps no clue would ever have been obtained..."

The small paper note that was recovered had been taken from the money drawer in the vault. Apparently dropped by the robber, the paper was torn as though it had been bitten. No other evidence could be found that anyone had entered the vault. The perplexed investigators examined every inch of the vault finding only a small hole where the baseboard and floor met. Wondering if access might have been somehow gained through the small hole the floorboards were ripped up. The account concluded that after following a trail under the floor for 18 feet "the money was found (to no small satisfaction of the officers of the bank) underneath the hearth and about six inches below the surface of the ground, formed into a mouse nest." It was then reported that: "The four footed felons escaped."

1. Our View: Broadband expansion is more crucial than ever DISPATCH EDITORIALS

2. Voice of the people: Michael Hallett, PhD. LETTERS TO THE EDITOR ([email protected])

3. Voice of the people: Paul Mack LETTERS TO THE EDITOR ([email protected])