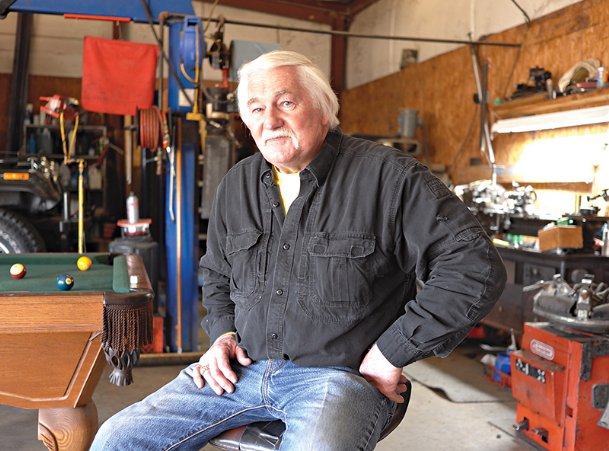 Bill Cole sits in his shop at Dixie Towing Monday afternoon. Recently a Birmingham retina specialist restored Cole's sight in his left eye, which had been blinded in a childhood mishap more than 50 years ago. Photo by: Birney Imes/Dispatch Staff

Monday afternoon Bill Cole sat on a barstool in the empty bay of a metal building that houses Dixie Towing, the New Hope business he has owned and operated for 30 years and looked out across the road. Cole was wearing pressed jeans, cowboy boots and a black long-sleeved shirt. His swept-back white hair gives him the look of a country music star -- think Charlie Rich.

The open door offered a view of Oswalt Road and, across the way, a Shell convenience store, which, at the moment, was enjoying brisk after-school traffic. Cole's brother Sonny owns the store. It stands on the site formerly occupied by the family home. Richard, another brother, a retired mail carrier, lives behind the store.

A glance around Cole's shop reveals a man of diverse interests. A mint-condition wooden pool table with carved legs sits at the center between two bays. "I'd rather do that (shoot pool) than eat when I'm hungry," Cole says. "That and squirrel hunting." (Cole, 66, is legendary for his squirrel dogs and hunting prowess.)

Antique children's toys line the edge of an open attic above an office space. The battered side panels of a racecar, a relic of Cole's 35-year career as a dirt-track driver, hang over a workbench.

"I wasted all my inheritance on dirt-track racing," he says.

These vestiges of a well-lived life are even more remarkable considering Cole, until recently, has been blind in one eye. The blindness the result of a skirmish between two kids -- Cole was 12 -- one of them brandishing a butcher knife.

After getting his left eye cut with the knife, Cole went home, but didn't tell his parents. He woke the next morning blind in both eyes. After about six months, he regained sight in the right eye. Doctors offered no hope for the left eye.

Notwithstanding the reoccurring pain in his left eye, having sight in only one eye never handicapped him, Cole says. He played high-school football. When dirt-track racing, he says he was able to gage his distance from other cars but had no peripheral vision to his left. For that reason, he kept his car in the inside lane.

By any measure, Bill Cole has led an active -- some might say devil-may-care -- life.

"I burned the candle at both ends and in the middle," he says.

At the first of the year, Cole had what he termed a stroke in his right eye, causing him to see double in his one good eye. Columbus ophthalmologist Dan Bennett referred him to John Mason, a retina specialist from Birmingham.

When Mason seemed more interested in Cole's left eye, the one he hadn't been able to see out of for more than 50 years, Cole wanted to know why.

"Get busy," Cole told the doctor.

About eight weeks ago, Mason put a new lens in Cole's left eye and removed cataracts and scar tissue. The eye had not suffered any nerve damage. After more than 50 years of blindness in his left eye, Cole says vision in that eye is now close to perfect; the right eye is still in need of cataract surgery.

By any measure, Bill Cole has led an action-filled life. That he has done so sight-impaired and with recurring pain are not the only ways he has defied expectations.

"Everyone said I'd never see 21. I've done three times that. I wasn't accident-prone, but I was rough."

Cole leaned back on his barstool.

"You'll never talk to a fellow been more blessed than me," he said.

Cole does have one small regret, however.

"I wish my mother and daddy could see this," he said, pointing to his left eye.

3. Leonard Pitts Jr.: We have a rotten tree NATIONAL COLUMNS