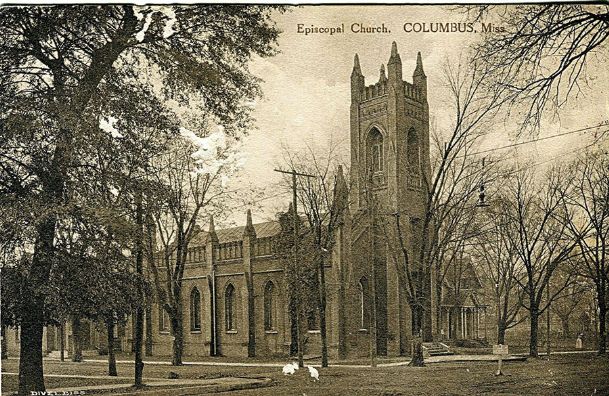 A postcard of St. Paul's Episcopal Church and its rectory that in 1911 was Tennessee Williams' first home. The photo was apparently taken between 1909 and 1915 and appears to show a nurse or nanny with a small child beside the rectory around the time Williams would have been a child there. It is interesting that the Rev. Joseph Holt Ingraham served as a minister there, "Red" Barber visited and spoke there in the 1970s and Clyde Kilby's funeral was held there. Photo by: Courtesy image/Billups-Garth Archives, Columbus Lowndes Public Library

A drawing of the Harris home in Columbus by Josh Meador, the Oscar-winning longtime head of animation effects for Disney Studio. The house was the childhood home of Clyde Kilby's wife and the home to which he retired. Kilby was a biographer of C.S. Lewis and an editor for J.R.R. Tolkien.
Photo by: Courtesy image/Billups-Garth Archives, Columbus Lowndes Public Library

This weekend's Tennessee Williams Tribute in Columbus brought to mind the many talented literary figures that have at times called Columbus home.

Columbus has a grand literary heritage and not just of Tennessee Williams. From the establishment of the Town of Columbus in 1819, it has been the home of people leaving their mark in literature. It is worth recalling a few of the city's most noted or interesting writers.

Gideon Lincecum settled in 1818 near the site that would become Columbus. The next year he moved four miles south to the new town. A self-taught man, he excelled in many fields. He wrote magazine articles on hunting, studied herbal medicine with a Choctaw Indian doctor, was in Texas in 1835 at the beginning of the Texas Revolution and wrote papers on the evolution of ants which were published by Charles Darwin. He was a true Renaissance man of the 19th century. He died in Texas in 1873 and is buried on "founder's row" of the Texas State Cemetery in Austin.

Joseph B. Cobb moved from Georgia to Noxubee County in 1837 and then Lowndes County in 1841. He was the author of three books and publisher of the Columbus Whig newspaper. In 1851, Cobb published a book titled "Mississippi Scenes." It contained one of Mississippi's earliest ghost stories, "The Legend of Black Creek." It was the story of the haunting of Black Creek on Military Road four miles north of Columbus. Cobb died in 1858.

The Rev. Joseph Holt Ingraham was rector of St. John's Episcopal Church in Aberdeen in the early 1850s and served for a time at St. Paul's Episcopal Church in Columbus and at Christ Church Holly Springs. Besides being a minister, he was also a nationally popular author in the 1850s. In 1858, he wrote a historical fiction novel about Moses titled, "The Pillar of Fire or Israel in Bondage." Ninety-six years later Cecile B. DeMille used that novel for much of the screenplay of his classic movie "The Ten Commandments." In the movie's credits, Ingraham is given top billing as writer.

Wisteria Place in Columbus was the last home of A.B. Meek. He spent most of his life in Alabama, where he made a name for himself as an attorney, judge, speaker of the House of Representatives, attorney general, assistant to the U.S. Secretary of the Treasury, editor of the Tuscaloosa and Mobile newspapers, historian, moving force behind the creation of Alabama's public school system and as a poet of national reputation. He was considered the leading literary figure in antebellum Alabama. After the death of his wife in Mobile, he moved to Columbus in 1863, where his much younger brother, Samuel, resided. Samuel, also a prominent attorney, was married to Mary Cannon, the daughter of Col. William Cannon. Not long after Alexander arrived in Columbus, he married Col. Cannon's widow, making him his brother's father-in-law.

Clyde Kilby was the long time chairman of the English department at Wheaton College in England where he became a leading scholar and lecturer on the "Inklings," a group of English literary figures who met at the Eagle and Child Pub in Oxford, England. The group included fantasy authors C.S. Lewis and J.R.R. Tolkien.

Kilby is considered one of the foremost biographers of C.S. Lewis. He had met Lewis and began corresponding with him in 1953. He was also an editor for J.R.R. Tolkien, having spent the summer of 1966 at Tolkien's house working with him. The award for Inkling studies is named the Clyde Kilby Award.

Kilby's 1986 obituary in the Chicago Tribune stated: "Mr. Kilby was chairman of the English Department at Wheaton from 1951 to 1966. During his tenure, he was known as a leading expert on Lewis and Tolkien."

Kilby was married in Columbus to Martha Harris in 1930 and retired here to her family home across the corner from Temple Heights. There he had Tolkien's desk and C.S. Lewis' old family wardrobe both of which he left to Wheaton College at his death in 1986. He was the author of four books on Lewis, one on Tolkien and co-authored another on Lewis.

Last week I wrote about Charles Henri Ford, a poet, photographer, artist, novelist and editor. He is often credited with introducing America to surrealism in the arts, is known as America's first surrealist poet and was once cashier at the Gilmer Hotel Cafe/Coffee Shop in Columbus.

Two sports legends who were born in Columbus were also authors. "Red" Barber, the famed sportscaster who is in the National Radio Hall of Fame, wrote six books on baseball and broadcasting. Henry Armstrong, an African-American boxer considered one of the five greatest boxers of all time, wrote an autobiography called "Gloves, Glory and God."

While today's column dealt with past writers of note from Columbus, there are presently several noted writers living in or associated with the city. Most prominent among them are the award winning popular novelists Deborah Johnson, who resides in Columbus, and Michael Farris Smith, who formerly taught at MUW and lived in Columbus but now resides in Oxford.

As Columbus' celebration of Tennessee Williams winds down, research by scholars is beginning to show Williams drew more from his experience in Columbus and with its people than previously recognized. Recent research may even link some of Williams more notable characters and scenes with Columbus.