Ask Rufus: A Flag and a Single Star 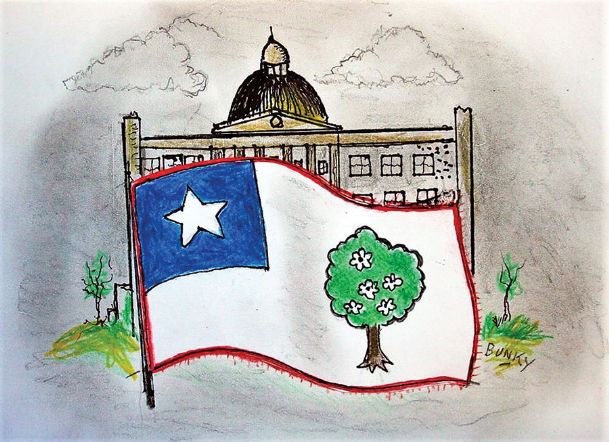 A drawing by the late Uncle Bunky of Mississippi's Magnolia Flag of 1861. It combined the white star on a blue field of the Republic of West Florida flag that flew over what is now south Mississippi in 1810 with the image of a magnolia tree in bloom. Photo by: Courtesy image

In 1851 a flag of a "single star and stripes" was unfurled at Pass Christian. That flag was similar if not the same as an unofficial Republic of Texas flag 1836-39 which was later used as a provisional flag by Florida when the Civil War began.
Photo by: Courtesy photo/Wikimedia commons/Flag of the Republic of Texas

Of Mississippi's historic flags I have always thought the prettiest was the Magnolia Flag. Though designed in 1861, the origins of the Magnolia Flag date back to 1810 making it much more historic than a Civil War flag. On it are a single star and a magnolia tree. A single star with the same heritage remains on the flags of Texas, Chile, Cuba and Puerto Rico.

On Jan. 9, 1861, Mississippi seceded from the Union and became the Republic of Mississippi. Not having a flag, the old 1810 flag of West Florida's revolt from Spain was unfurled at the state capital. Being blue with a single white star in the center, it took the name of the Bonnie Blue Flag. It was quickly realized that Mississippi needed an official flag and a committee was organized to design one. The flag which was proposed and adopted was described as "A flag of white ground, a magnolia tree in the center, a blue field in the upper left-hand corner with a white star in the center."

That flag, which had incorporated the flag of West Florida, became known as the Magnolia Flag. It remained the state flag until after the Civil War. Though the flag did fly over Mississippi when the state was part of the Confederacy, the roots of its symbols go back to 1810 and West Florida's fight for freedom from Spain. Its canton is still found on the Texas flag and has taken the name of the Lone Star. The "Lone Star" actually flew in Mississippi before it did in Texas.

The flag's lone star canton is often referred to as the Bonnie Blue flag, which was popular in the South at the beginning the Civil War. It is, however, a flag from the early days of the American Republic. In the first decade of the 1800s, Spain claimed and exercised control over the Territory of West Florida. That territory consisted of what is now south Alabama, south Mississippi and that part of Louisiana east of the Mississippi River. It was the land which was below the 1798 Ellicott Line or 31 degrees. Many United States citizens settled in that area with permission of the Spanish authorities.

In 1810 those settlers revolted against Spanish rule. A Massachusetts newspaper, The Essex Register, reported that on July 4, 1810, the settlements of Baton Rouge and "Bayu Sarah" declared independence from Spain and raised their banner of independence. It was a blue flag with a single white star in its center. It was not until Sept. 23 that the Spanish fort at Baton Rouge was occupied and that lone star flag was raised over it. The territory officially declared its independence and became the Republic of West Florida on Sept. 26. The United States quickly annexed the territory after dispatching troops to occupy it. In December 1810, West Florida was divided between the Mississippi Territory and the Orleans Territory.

Spain still held onto Mobile with the Spanish garrison at Mobile's Fort Charlotte refusing to surrender to United States control. In 1812 an expedition of West Florida settlers marched on Mobile and raised their "Standard of Independence" near there in December. However, they were unsuccessful, and Spain continued to control Mobile until the U.S. military occupied the town in April 1813.

Variations of this "standard of independence" became a symbol of the fight for freedom and independence across the Americas. It flew in the Republic of Texas and still adorns the Texas flag. It became the standard of an ill-conceived 1850s effort by some along the Gulf coast to attempt to annex Spanish Cuba to the U.S. That attempt was reported in the Aug. 1, 1851, Morning Daily News of Savannah, Georgia, as "the Cuban Excitement in the South West."

The article further reported that the proposed expedition's flag of a "single star and stripes" had been unfurled at Pass Christian. That flag was similar, if not the same, as an unofficial Republic of Texas flag used 1836-39, which was later used as a provisional flag by Florida when the Civil War began. It had 13 alternating red and white stripes with the canton being a blue field and white or silver star. In 1861 Louisiana adopted a flag of the same design but with different colors. It had 13 stripes alternating in the order of blue, white and red, and a canton having a red field containing a single yellow star.

The single star on a blue or red field was a symbol of freedom and independence across the Americas in revolts against Spanish rule. The flag of Chile, a white star on a blue background with red and white stripes, dates to the Chilean revolution against Spain in 1817. That was only five years after the last use of the Lone Star flag in West Florida. Even today a single white star on a red background remains on the flags of Cuba and Puerto Rico. It is a surviving symbol from 1810 of the desire for freedom from oppression.

As Mississippi struggles with whether to change its flag, we would do well to remember the flags that have flown over Mississippi have changed over the years, and the present flag with its canton of the battle flag of the Confederate Army of Northern Virginia is not as representative of Mississippi history as designs used on other older and more historic Mississippi flags.

I would be the first person to oppose changing our flag just because someone from outside Mississippi didn't like it. However, there are many fellow Mississippians who have problems with the 1894 flag. I would not object to reviving the historic elements from older flags to have a new flag that reflects the 221 years of heritage since the creation of the Mississippi Territory in 1798. That would be a more fitting flag than one having a canton on it that is a Confederate battle flag historically more closely linked to Virginia than Mississippi.