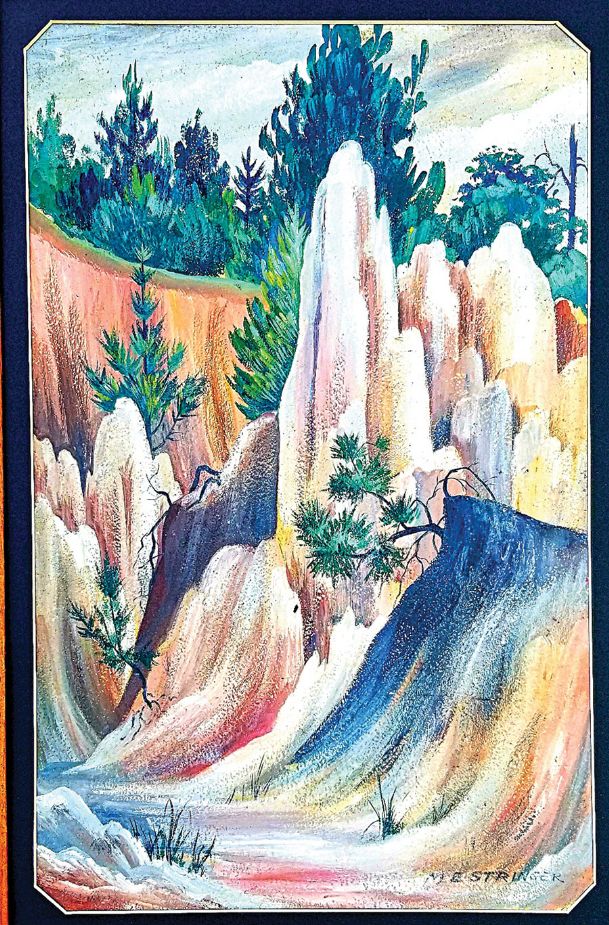 A painting by Mary Evelynn Stringer, a long time art professor at the Mississippi University for Women. It is titled "Clay Ghosts" and is the gullies at Allison's Wells. It was probably painted there during the 1950s when she was an instructor at the Allison Art Colony. Photo by: Courtesy image

A 1907 postcard of Allison's Wells at Way, Mississippi. The famous resort which burned in 1963 has been called "the last Mississippi spa." In the late 1800s and early 1900s it was a noted resort and spa.
Photo by: Courtesy image

An advertisement for the Allison's Wells resort in the June 7, 1914, Columbus Dispatch.
Photo by: Courtesy image

On Friday I was at the Duncan Gray Episcopal Conference Center for a Gray Center board meeting. Located at Way, Mississippi, nine miles north of Canton, it is not only a beautiful setting but a historic one as well.

It was there that Allison's Wells, one of Mississippi's grand old summer resorts, was built in 1879. Until it was lost to a fire in 1963, the Fontaine family maintained its tradition as a first-class old-time resort.

I recall my father telling me of the last time he was there. It was in the 1950s and he and my mother were traveling with friends and decided to stop there for dinner. When they went in my father was immediately informed that he could not be seated for dinner unless properly attired with coat and tie. When my father replied he did not have one with him and turned to leave, he was quickly told "but don't worry we have a closet full of coats and ties where you may select one for the evening." It was a resort from a different time and age.

It was this time of the year that Allison's would open its summer season. An advertisement in the June 7, 1914, Columbus Dispatch announced that "Allison's Wells is now open for guest."

The popularity of resorts and spas mushroomed in the 1870s with the advent of improved rail service. Most of the mid-1800 resorts blossomed near railroads so that travel there could be relatively easy and not too lengthy. That was the case with Allison's Wells at Way. In 1879 a shallow well dug about a mile from the small Illinois Central Railroad depot at Way produced an ice cold medicinal mineral water. At the site a "health spa" to be known as Allison's Wells was soon built.

Entertainment there in its early days included cock fighting and gambling. By the early 1900s, though, the resort had become more health and family oriented. The 1914 advertisement in The Columbus Dispatch claimed that water from Allison's Wells could treat everything from malaria to eczema. The water there was noted not only for its healthy properties but because mixing Bourbon with it would cause it to turn black.

Newspapers from the 1890s through the 1920s are filled with reports of people traveling to Allison's for stays ranging from a few days to a couple of months. Advertisements were run in papers across mid-America both by the hotel itself and by the Illinois Central Railroad whose small depot at Way was only about a mile away. An Illinois Central notice promoting five resorts, including Allison's, located along its line ran in many newspapers in 1902. The New Orleans Times-Picayune in 1921 advertised I C RR rates from New Orleans to Allison's Wells as $8.65. It was $26 to St. Louis and $33 to Chicago.

The healthful benefits of the mineral water at Allison's were an important attraction. An Allison's Wells ad in the 1921 Times-Picayune stated that: "Time for a vacation? Here's the place. Rest and Recreation, Hot Sulphur Baths for Skin Disorders and Unsurpassed Mineral Water for Malaria."

How popular was the resort as a health spa? The Gulfport Daily Herald reported on September 6, 1917, that there was a moonlight picnic given for Col. R.H. Henry and family. However there was one regret heard. "The 'Col.' had left a few days before for a short stay at Allison's Well. Hoping that the fine mineral water of this famous resort would soon restore him to his usual good health."

The story of how the curative properties of the water were discovered is a bunch of hogwash. Well, actually it is, for in the 1870s it was discovered that hogs wallowing in water and mud from a well, where the water was not fit to drink, were found to be cured of any skin disease.

Allison's Wells was also noted as a center of social life and was the scene of many parties, weddings and other events. One of the more interesting events was the summer fireworks of 1901. Press reports described the fireworks show on the night of June 25th. "The spectacle was witnessed by about 400 people arranged on the hilltop, the fireworks being set off from the valley below, shedding a glimmer of colored lights over the party." The party continued with a dance until the 1:30 a.m. train arrived to carry people away.

In 1948 the Allison Art Colony was established by the Fontaines with artist Karl and Mildred Wolfe of Jackson. Until the hotel burned, artists, teachers and art students from across the country gathered there for workshops taught by nationally known artists. One of the early moving forces in the art colony was Ralph Hudson of MSCW (now Mississippi University for Women). For more than 10 years students from the art department at the W attended Allison Art Colony weekends under faculty members Mary Evelyn Stringer, Eugenia Summer and Ralph Hudson.

Allison's Wells was described by F. Wenderoth Saunders in the November 1953 issue of Lincoln-Mercury Times as: "A hotel, a resort, an inn, a spa, home, grandma's house, a weekend at a wealthy friend's -- it combines the best of all of these." And a 1921 description of Allison's Wells from the Grenada Sentinel could just as easily describe the Gray Center which now occupies the site of the old resort. It is "...an ideal place to commune with nature and to forget for a short while the turmoil and rush of a busy world."

3. Voice of the people: Lee Roy Lollar LETTERS TO THE EDITOR ([email protected])

4. Voice of the people: Ross Whitwam LETTERS TO THE EDITOR ([email protected])

5. Voice of the people: Raymond Gross LETTERS TO THE EDITOR ([email protected])