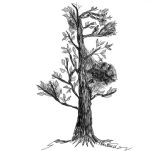 "What goes into that cocoon in autumn is a caterpillar, and what comes out in spring is entirely different -- a moth, complete with papery wings, hair-like legs and antennae."

The air blows hot and dry, but even that is a welcomed comfort when standing under shade trees. We're losing the battle against drought even though we run hoses and sprinklers. Blades of grass shrink and zinnias brown. The Prairie petunias, also called Mexican petunias, perk up with just a splatter of well water, more so with a light shower. Crepe myrtles thrive here and will not be defeated.

What we've called bagworms are prolific this year, and only recently we learned they are not bagworms at all, though we've had bagworms. Bagworms are those little cone-shaped ornaments occasionally hanging from cedar trees. Bagworms are particularly attracted to conifers. What we have are webworms. Webworms are native to North America but have since spread throughout the world.

"Webworms have periodic population explosions. Outbreaks occur every four to seven years, and each outbreak may last for two to three years until natural control agents reduce the activity," says garden.lovetoknow.com. I think 2018 may be an explosion year as I've seen plenty in our yard, through the Prairie and on treks through the Southside.

The tiny white moth lays its eggs on the underside of the leaves of mostly persimmon, sweetgum, pecan, elm, hickory and fruit trees in our area. A few days later caterpillars hatch and immediately spin a web over the leaves. The caterpillars prefer the outer limbs of the tree and spin what looks like a large webby nest. In some cases, the web may cover the entire tree, though I've not seen one covering a whole tree. Typically, caterpillars are not harmful to the tree but only defoliate a limb or two. Mature caterpillars drop to the ground, bury in the soil and cocoon for winter. The white moth will emerge in spring.

If the webworms aren't a bother, leave them alone and they'll disappear. Since I've learned about them I enjoy watching them. They build high enough there's no worry of walking into a web, which would totally freak me out. There are a few methods of ridding yourself of the worms -- chemicals, of course, or burning, if you're adventurous and don't mind the possibility of burning yourself or the tree. One website said, " ... if you're insane enough to hang on a ladder with a 20-foot flaming pole."

Webworms have some 86 natural predators. With a pole or a broom, break open the web. You can be sure a bird or two will thank you for a most fabulous feast.

4. Voice of the people: Angela Jones LETTERS TO THE EDITOR ([email protected])