In love with daylilies 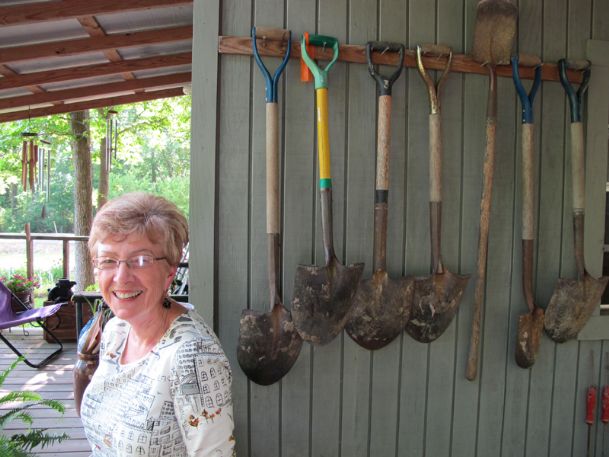 Juanice Hayes stands next to her potting shed at her daylily farm. Hayes with her husband Stanley, began growing dayliles after a neighbor plant them to solve an erosion problem at their New Hope home. Photo by: Birney Imes/Dispatch Staff

Growing up on a cotton farm in Lamar County, Ala., Juanice Hayes made a promise to herself -- she would not make her living hoeing in the dirt. She had plenty of that as a child, thank you. And while that has been the case, technically speaking -- Hayes taught fifth grade at New Hope for 34 years -- she has broken that promise. In a big way.

"There isn't a day that goes by I'm not working with a hoe," Hayes laughs.

There are differences, though. The crop she works is daylilies, not cotton, and she does it by choice, not necessity.

About 30 years ago Hayes and her husband Stan starting growing daylilies. They needed a way to stop the erosion in the backyard of their house at the intersection of Ben Christopher and New Hope roads. A neighbor suggested daylilies, a flower that multiplies and stays green throughout the winter.

The neighbor, Mrs. R.W. Belk, said if the Hayeses would help her divide her daylilies, she would give them some. Belk gave them far more than they needed for erosion control and an obsession was born.

Stan and Juanice started planting daylilies on their six acres, joined the American Hemerocallis Society and met people throughout the country who shared their passion for the flower that blooms for only a day (A single plant will put out blooms for several weeks.).

More importantly, Stan, a Dispatch pressman, and Juanice found a way to live their life doing something together they both loved.

"It's been a big part of our lives," Juanice said Friday afternoon. She was sitting on the front porch of her potting shed. Her 1,500 daylily varieties of every imaginable color glowed behind her, dazzling in the bright sunshine.

Compact and bright-eyed, Juanice Hayes speaks with clarity and precision, a skill that surely served her well in the classroom.

"This is a threefold thing." She's explaining why she labors from first light to late afternoon among her flowers.

"My community enjoys them. People vary their way to work to see the daylilies.

Hemerocallis (from the Greek words meaning "beauty" and "day") enthusiasts travel from afar to Hayes' daylily garden and pay $5 up to $100 for plants with names like Compliment Magnet, Dolly's Lipstick, Yazoo Jim Terry and Mad Hatter. Members of out-of-town daylily clubs are Hayes' best customers. Locals buy mainly for color.

"The war that I have is with deer," she says.

A warm winter and spring have produced the earliest blooms ever for Hayes. Cosmic Hummingbird bloomed April 2 this year. Previously her first bloom was April 22.

Her daylily garden will be at peak beauty later this week, about three weeks earlier than usual, normally around June 10.

Stan died in December of 2008. He and Juanice had been married 51 years. Stan was the people person, the one customers gravitated to; she toiled in the background. That's since changed, of course.

After her husband's death Juanice sought consolation in the most natural (and predictable) way -- that spring she worked her daylilies. There she found comfort.

"Nearly everything I saw and touched reminded me of him," she said.

"Even today," Hayes said, returning to the present, "I see plants he liked or bought. Today I saw one and thought, 'This is the one Stanley got when he went to Reform when Polly Mayo died.'"

After our interview as I got ready to leave, Hayes handed me a plastic bag containing two daylilies, Taken by Storm and Passion District.

Pointing to the stems she showed me where to prune the plant.

"Put them in the ground now and they will be beautiful next spring," she said.

Birney Imes is the publisher of The Dispatch. E-mail him at [email protected]