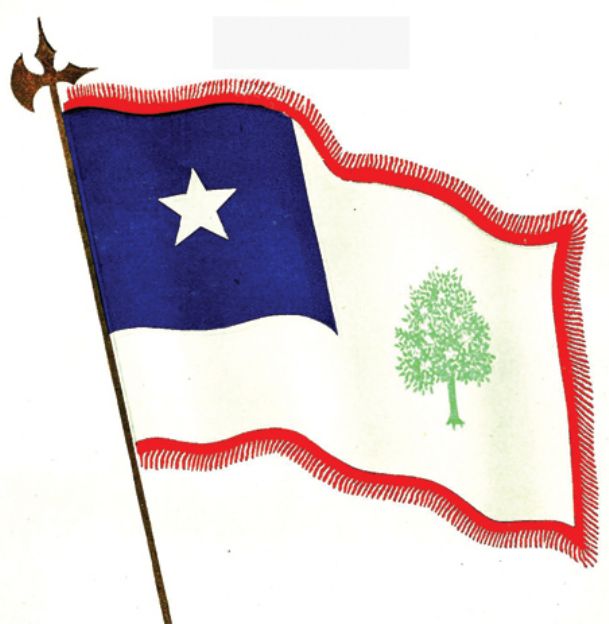 The Magnolia Flag was Mississippi's flag from 1861 to 1894. Image is from the Mississippi Official and Statistical Register of 1908. Photo by: Provided image

The "Bonnie Blue Flag" which was once called the "Lone Star Flag" has been a symbol of Southern independence for more than two hundred years. The flag was first raised, to resounding cheers, on Sept. 23, in Baton Rouge, La. It had been designed by Melissa Johnson, who was the wife of dragoon Major Isaac Johnson. It was quickly accepted by the rebels as their symbol of independence.

The Columbian Centinel of Boston reported "Col. Kemper... was on the Alabama River" and that "the standard of Independence had been reared by Major Kennedy, in the vicinity of Mobile, where the cause has many friends." The flag with a lone white star on a blue field continued to fly over Baton Rouge until the town was occupied by United States troops.

The year was not 1861. It was 1810. It was the revolt of American settlers in Spanish West Florida and its annexation to the United States. Spanish West Florida in 1810 stretched along the Gulf coast from the Perdido River (Perdido, Fla./Orange Beach, Ala.) vicinity west to the Mississippi River (north of New Orleans) and north to an east west running line about 25 miles south of present-day Hattiesburg. From 1810 on, the flag with a single star became ingrained in the Southern spirit of independence.

The flag next surfaced in 1836 as the lone star flag of the Texas Revolution. The flag was basically the same, though the single star was sometimes yellow or gold. Different versions sometimes included the words "Independence" or "Liberty or Death" in the blue field under the star. The present Texas state flag was adopted in 1839.

It was therefore only natural that when the South first broke from the Union in 1861 that the Lone Star flag was among the first to be flown. On Jan. 7, 1861 a convention of people of Mississippi met in Jackson to decide Mississippi's fate. That fate was sealed on Jan. 9th when the convention voted to secede from the Union and become the Republic of Mississippi. The actual "Ordinance to Dissolve the Union" was signed Jan. 15, 1861. Mississippi's ordinance of secession was welcomed with a new flag, but it was not so new, for it was the old Lone Star Flag of Southern independence.

The ladies of Jackson presented to the convention a flag consisting of a single white star on a blue field. It was the historic flag of West Florida. The blue silk banner had been made by Mrs. Homer Smythe and was carried through the state capitol building in a scene of "wild tumult" and "continuous cheering."

The flag with the single star was quickly raised over the state capitol building. An Irish comedian and lyricist Harry McCarthy was performing in Jackson at the time and was so moved by the scenes that he composed the song "The Bonnie Blue Flag" to commemorate the events he had witnessed. The tune was based on an old Irish folk song "Irish Jaunting Car." He first sang the song in a Jackson theater to a cheering crowd. The song and flag quickly swept across the South.

A version of the lone star flag was adopted as the official flag of the Republic of Mississippi by the State Convention on Jan. 26, 1861. The flag's field was white with a magnolia tree and a blue canton with the white lone star. Though it was little used after the Civil War, the Magnolia Flag remained the state flag until the adoption of the present state flag in 1894.