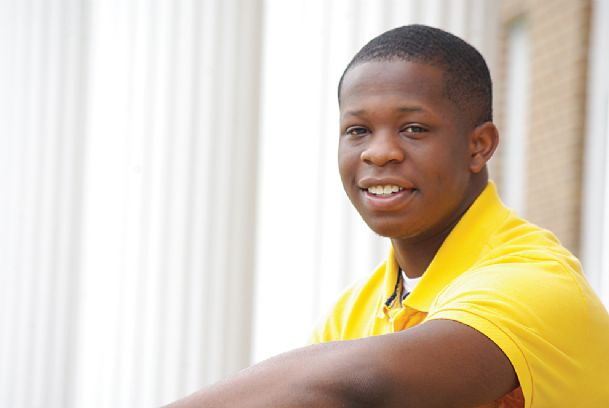 Kenyon King's life defies expectations. The day his mother, Tangenika King, dropped out of high school to get a diploma in motherhood, she had likely never heard of American University. She was much too busy learning how to change diapers or working as the only female employee at Fish Belt Feeds, Inc. and Allen Canning Company in Moorhead. Later, while she studied for her GED or brought Kenyon with her to community college classes out of necessity, she may have dreamed of Kenyon going to college; but, Washington D.C. was probably not the campus she imagined.

Kenyon's father didn't have much parenting on his mind. Two or three years after Kenyon's birth, he moved to California and lost touch with his son. Luckily, Kenyon's paternal grandparents consistently stayed in his life, often babysitting for Tangenika or providing financial help. Still, this often wasn't enough. For most of Kenyon's childhood, Tangenika received welfare to help support them, and Kenyon would regularly have to stay at home by himself since his mom worked at night.

Kenyon's father wasn't much of a babysitter when he eventually moved back to Moorhead. Most of his focus was on selling drugs. And, like many in his chosen field, the only employee benefit he received was prison time.

The folks at the Sunflower Freedom Project must have recognized Kenyon's potential right away. The mission of Freedom Project to help unlikely dreams come true. Founded by Chris Myers Asch (who wrote an outstanding book called "The Senator and the Sharecropper" about Senator Eastland and Fannie Lou Hammer), Shawn Raymond, and Gregg Costa, the Freedom Project is a non-profit dedicated to training and inspiring future leaders from the Delta.

In its 13th year, the Freedom Project offers a year-round fellowship with a residential summer program at the University of Mississippi.

Kenyon joined the Freedom Project because he wanted to learn Taekwondo. At the time, he was a good student but never truly pushed himself. He was popular with students and could get easily distracted in class. With the Freedom Project, though, Kenyon traveled across the country and overseas. This exposure sparked ambition and drive. Suddenly, he wanted to see more. He wanted to go to college. He wanted to succeed. This, of course, was exactly what the founders of the Project intended. Yet, Kenyon's new found ambition eventually stretched beyond even their imagination - to a full scholarship from Bill Gates.

Before Kenyon became Gates scholarship material, he had to survive his first semester at Mississippi School for Math and Science. After his sophomore year of high school, Kenyon took the advice of a fellow Sunflower Project alumnus and applied to MSMS. When he did, everyone told him MSMS would require a higher level of academic achievement. The first semester he received a C in one class and realized he was in a completely different academic world. No longer was there a group of students expected to fail or to act up or to get bad grades, like his previous public school; now, he was in a race to the top. And, to keep pace, he would have to run harder than he had ever imagined possible.

The next semester, Kenyon's effort paid off. He got all As and one B.

That summer, Ms. O'Brien, a district representative for MSMS, was the first person to realize Kenyon, then a senior, was Gates scholarship material. She kept encouraging him to apply, even when other scholarships failed. When a teacher read past scholarship essays, she told him to find his narrative, to explain to the reader the heart of his story. Kenyon didn't want to criticize his hometown or invoke sympathy, but the teacher convinced him he could honestly tell his story without disparaging it. Several drafts later, Kenyon told his story powerfully enough to win one of the most prestigious scholarships in the country, and earned a full scholarship to American University.

Scott Colom is a local attorney. His e-mail address is [email protected]

Scott Colom is a local attorney.