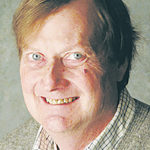 Every now and then I come across a local figure or event that is almost too amazing to be true but contains a definite thread of truth woven throughout the story.

Such is the story of Dr. Frank M. Bell who was born and raised in Columbus, was an aviation pioneer, a “leading spirit” of the Catalina Island sailing community, had the first automobile in El Paso, was the hero of a trainwreck in Kansas, was tried but acquitted of murdering his brother-in-law in San Francisco and died in 1914 after an “aeroplane accident” in Meridian. And all that is only the tip of the iceberg when it comes to his story.

I discovered his story when researching the earliest days of aviation in pre-World War I Columbus. The Columbus Commercial in 1913 gave a fitting introduction to Bell when he returned to Columbus in December and put on a one-man aerial show. The article said, ”It has of often been said that no prophet is without honor save in his own land, and the truth of the aphorism is again evinced in the case of Dr. Frank M. Bell, a native of this city, who is well known in the world of aerology, but of whom comparative few Columbians of the present generation had ever heard until he reached his native heath last Monday. … Nobody is asking any questions, however, as Dr. Bell was glad to avail himself of an opportunity to visit his old home aid his friends of auld lang syne were overjoyed to greet him once more. … He was a student at the Franklin Academy in the good old days when the late  Prof. J.M. Barrow was principal of that school and Prof. S.M. Nash, at present county superintendent of education, a member of the faculty. The writer of this article remembers Dr. Bell very well, having often played with him when both were in knee breeches.”

On Dec. 14, The Dispatch reported that Bell had made two “ascensions” from Washington Park in Columbus. The weather was beautiful, and thousands turned out to see the “aeroplane.” The airplane was displayed for public inspection “with its full war equipment on the lot just east of the First Methodist Church on Main Street.” Bell was a promoter of the military use of aircraft and was developing techniques for aerial bombing.

When asked about his exploits by a reporter for the Commercial Dispatch, Bell related an experience that had occurred in France:

“Dr. Bell is not only an aeronaut of worldwide reputation, but is also a gifted raconteur, and tells a thrilling story regarding an ascension which he made at Rheims, France, a little more than two years ago, and thrice encircled the dome of the famous cathedral at that place.

On account of the topography of the country surrounding the cathedral, a flight in the immediate vicinity is exceedingly difficult, and, realizing this fact, the Prince of Minocco [Monaco], who is the ruler of the principality in which Rheims is located, offered a purse of $5,000 to any airman who would successfully accomplish the feat. More than a dozen French aviators had attempted to win the prize, but met with ignominious failure. One day a little more than two years ago Dr. Bell found himself in Rheims with only two francs in his pocket, and decided to attempt the flight. He had two very strong incentives, one an urgent need for money, and the other a laudable desire for fame, his reputation as an aviator up to that time not having risen above mediocrity.

Rubbing his two pieces of silver together in his pocket and thinking of the fame and fortune that lay almost within his grasp, Dr. Bell went to the official having in charge of the awarding of the prize and asked for permission to attempt the flight. The official granted Dr. Bell the desired permission, but at the same time warned him of the dangers that would be encountered. He seemed to think that if a dozen experienced French airmen had attempted the flight and failed that it was the height of folly for an adventurous American to make the attempt. He was disposed to look upon the whole proceeding in a sneering and contemptuous manner, but this only served to arouse Dr. Bell’s patriotism and pride and to make him more determined than ever to win.

The Countess D’Levere, a member of the royal family, learned that an American was to compete for the prize, and, having secured an introduction to Dr. Bell, seemed to take a fancy to him. She made two small American flags, which she waved at Dr. Bell while in the air, and the aviator says that the sight of these two gonfalons bearing the stars and stripes of his native country gave him the courage and daring of a super-man. After a flight, during which he encircled  the dome of the cathedral three times, he made a successful descent, and landed safely upon terra firma.

Upon landing safely, Dr. Bell was greeted with the military salute, and later was taken to the municipal theatre, where a reception was held in his honor. He presented with the five thousand dollars which he had so daringly won, and generously gave one thousand dollars of the money to the cathedral around whose spire he had thrice circled under such perilous conditions.”

This is only the beginning of Bell’s story. It will be continued next week. There are gaps and several holes in Bell’s story, and Carolyn Kaye is helping with research to fill them in.