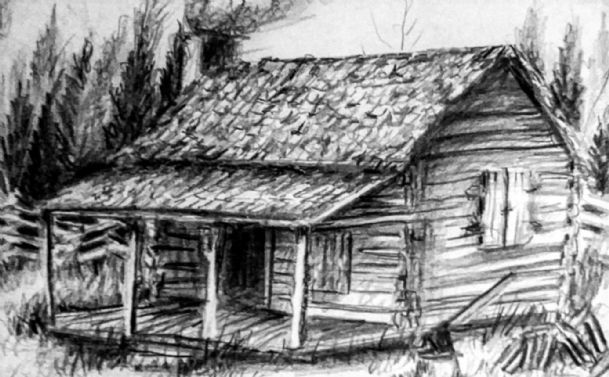 The first house on the site of Columbus was built in 1817. It was a small log cabin built about where the Columbus Convention and Visitor’s Bureau Office is now located. Drawing by Frank Swords. Photo by: Courtesy photo

Today, the Bicentennial of Mississippi kicks off here in Columbus but another bicentennial is also fast approaching — that of the founding of Columbus. The city evolved out of a series of settlements and events stretching from 1810 to 1821.

The first Anglo-American settlement associated with what became Columbus was John Pitchlynn’s 1810 residence at Plymouth Bluff four miles north of present day downtown. Pitchlynn was U.S. interpreter for the Choctaw Nation and served as subagent.

At the outbreak of the Creek Indian War in 1813, a palisaded log blockhouse later named Fort Smith was constructed at Pitchlynn’s. It became a supply depot and meeting place for Choctaw and Chickasaw leaders with U.S. military officers. In October 1814, Davy Crockett arrived there with Major Russell’s company to be resupplied on their way to join Gen. Coffee’s 2nd Brigade of Tennessee troops and Andrew Jackson. Coffee had passed through Pitchlynn’s a week earlier.

In 1816, after the end of the Creek Indian War, the land on which Columbus now sits was ceded to the U.S. by the Choctaw Nation.

It was also in 1816 that, at the suggestion of Andrew Jackson, Congress authorized construction of a military road to provide a direct route between Nashville and New Orleans. The road’s survey was completed by September 1817 and placed its Tombigbee ferry crossing at the site that became Columbus.

Anglo-American families began moving into the newly opened land east of the Tombigbee River in 1817. Among the first if not the first settler was Silas McBee and his family. Silas’ son Vardy McBee probably built the Cedars on Military Road just north of the original Columbus settlement in 1818. It is the oldest surviving house in Lowndes County. In 1819, McBee suggested the name of Columbus for the new settlement.

The first house on the original site of Columbus is linked to William Cocke, the U.S. Chickasaw Indian agent from 1814-1817. The earliest written account of the founding of Columbus was published in 1848 by Oscar Keeler who wrote: “In the latter part of the year 1817, Thomas Thomas, a man who had been driven out by the agent as an intruder in the Chickasaw nation, built a small split log hut upon the ground now known as the residence of C.D. Warren Esq.” Warren’s house stood about where the Columbus Convention and Visitor’s Bureau office is now located.

There is a question as to whether Thomas Thomas might actually have been Thomas Cheadle who was a carpenter at the Chickasaw Agency. He had worked with Cocke for more than three years, and his last agency pay receipt was for September 2, 1817. That places him leaving the agency about the time the Military Road survey was completed and just before the first house in Columbus was built. In addition, it was about that time William Cocke learned his service as Chickasaw agent would end in mid-1818. By June 1818, Cocke was reported living on the Tombigbee River. He was probably living on the land where Thomas built a cabin in 1817 as he had a two-story log residence there in 1819. The original cabin was occupied by Spirus Roach. Because of his long, pointed nose, the neighboring Indians called him “possum” and the town “Possum’s Town.”

The first official reference to the Town of Columbus was in a December 1819 Alabama legislative act. It was not until January 1821 that Columbus was recognized as being in Mississippi. In 1820, the post office that had been at John Pitchlynn’s closed and the Columbus Post Office was established. By 1819 there was Keelboat and flatboat traffic on the Tombigbee at Columbus. The first steamboat from Mobile arrived in 1822. The Town of Columbus, Mississippi, was chartered on February 10, 1821.

Very few of the early Columbus houses and none of the first commercial buildings have survived. There are only five houses from the earliest days of Columbus that are known to have survived.

The oldest surviving structure is the Cedars, which was built north of town on Pleasant Ridge overlooking Military Road but is now in the city limits. It was constructed between 1817 and 1824, most likely by Vardy McBee in 1818. The original part of the house is a 21-by-21-foot single pen log structure constructed of square-hewn pine logs. Capt. Edward Randolph enlarged the house and converted it into the Greek Revival style in 1835.

The Ole Homestead on College Street was built between 1819 and 1829. It is a frame vernacular raised cottage that was most likely built in 1825 by Charles Abert. Originally it was two rooms over two rooms facing the Tombigbee River. It was purchased in 1835 by John Kirk. He added an east wing and reoriented it to College Street. It is the oldest building known to have survived within the original town limits of Columbus.

The McCartney-Hunt house on Seventh Street South was constructed between 1824 and 1828 just south of the town limits. It is a two-story Federal Style brick house that resembles east coast Federal row houses.

Butterworth is a log dog-trot located on Fifth Avenue South but outside the original town limits. Once known as the Moody House, it was built between 1819 and 1830. Oral tradition says that the house may have been located downtown and moved to its present location around 1900. The house was built as two 16-by-16-foot log rooms with a breezeway between them. By the 1840s the logs were clapboarded over and the breezeway had been given a Greek Revival entrance way.

Hickory Sticks is located on the west side of Pleasant Ridge over looking the old Columbus — Hamilton Road now Seventh Street North. It also was outside the town limits when built. Originally it was a 1.5-story double pen log house, probably built between 1825 and 1830. Robert Hayden purchased the house in 1846, and it was probably then that the house was enlarged and remodeled into a Greek Revival home.

The Mississippi Bicentennial Celebration begins at Trotter Convention Center at 3 p.m. today. Mississippi’s original constitution from 1817 and a rare original 20-star U.S. flag, from when a star was added for Mississippi, will be on display. A special guest for the program will be former U.S. Congressman J.C. Watts.