Ask Rufus: In 1819 this was Columbus, Alabama 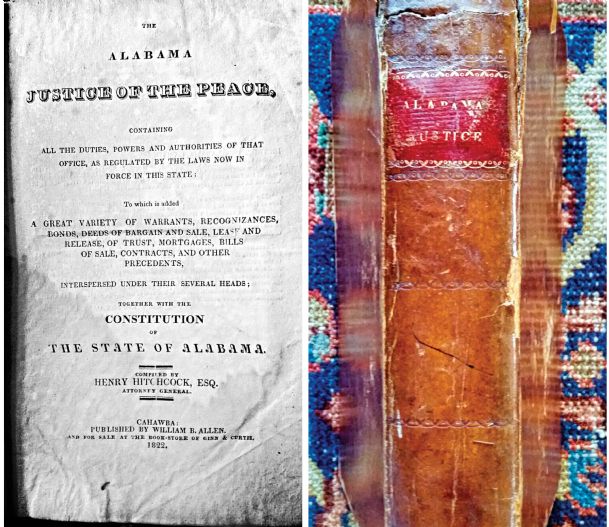 William Moore was the first mayor of Columbus and this law book belonged to him. It is The Alabama Justice of the Peace together with the Constitution of Alabama. It was printed at Cahawba, which was then the capital of Alabama. Photo by: Courtesy photo

The trace went from John Pitchlynn’s at Plymouth Bluff, across the river from Columbus, to St. Stephens, Alabama, about 50 miles north of Mobile. It closely followed the route of present-day Highway 45 from Columbus to Meridian. It was not until late 1820 that the survey of the state line was completed and Columbus and the town of Cotton Gin Port (near Amory) were discovered to be in Mississippi.

In fact, all of what in 1821 became the original Monroe County, Mississippi, was first considered to be part of Tuscaloosa County, and later Marion County, Alabama. That Alabama-Mississippi borderland included what is now Lowndes County, east of the Tombigbee, and that part of Monroe County east of the river and south of Gaines Trace (roughly Highway 25 north of Amory).

In February 1818, Marion County, Alabama, was formed from the northwestern part of Tuscaloosa County. Cotton Gin Port was chosen as the county seat. On Dec. 6, 1819, the county seat of Marion County was moved to the house of Henry Greer to place it closer to the rapidly growing Columbus settlement. Greer’s house was located at the present site of Columbus Air Force Base. A settlement known as Hamilton quickly arose just across the Buttahatchie River from Greer’s house.

The same Alabama law that moved the county seat to Greer’s established an Alabama election precinct at “some suitable house in the town of Columbus.” This is the earliest known reference to the settlement of 1817 becoming a town. It marks 1819 as the year Columbus officially became a town. Among the first county officials of Marion County, Alabama, were three Columbus residents; Silas McBee, representative to the legislature; Bartlett Sims, sheriff; and Richard Barry, notary public.

Pickens County, Alabama, was created from portions of Marion and Tuscaloosa counties in December 1820. The new county had three election precincts. One was at Mullens’, one at James Heflin’s and one at Ezekial Nash’s house. Nash’s house was located along present-day Highway 69 South in Lowndes County.

The survey of the state line was completed in late 1820 and on Jan. 3, 1821, Mississippi Gov. George Poindexter announced “a considerable population on the waters of the Tombigbee formerly attached to Alabama fall within the limits of this state (Mississippi).”

The April 1821 organizational meeting for Monroe County, Mississippi, was held at Henry Greer’s house, the former county seat of Marion County, Alabama. By October, 1821, the county seat had been established just north of Greer’s at the Hamilton settlement. That site was selected as being between the new county’s two towns, Columbus and Cotton Gin Port. In 1830 the southern part of Monroe County separated and became Lowndes County.

Columbus has always had close ties with our neighbors in Alabama but few people have realized just how old and deep those ties are.