Ask Rufus: ‘Oh see the boat go round the bend’ 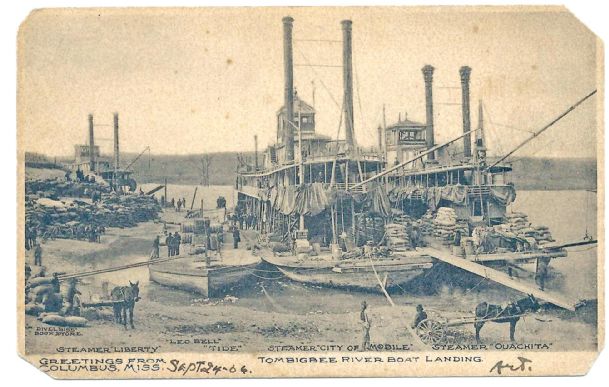 A 1906 postcard showing the Tombigbee River Boat Landing at Columbus. It is actually a 1905 photo of Webb’s Landing on the Tombigbee at Demopolis, Alabama. However, the same boats also came to Columbus, so the scene here would have been very similar. Photo by: Courtesy photo

It’s February and the Tombigbee is filled to its banks with water from recent rains. Such times always bring to my mind scenes of the steamboats that once plied the river between north Mississippi and Mobile. During the 1800s and early 1900s, there were almost 20 different steamboat landings used at one time or another in Lowndes County.

Along the Tombigbee, steamboat landings ranged from being little more than a shed on the river bank to an improved landing with a warehouse. Many of the smaller landings were associated with plantations and often had stacks of wood to sell to the steamers that passed. The boats used the wood as fuel for their boilers. Landings in towns tended to be larger, improved and usually having one or more warehouses.

In Columbus there were two different landings used during the mid-1800s. The oldest one was just below the foot of Main street where the Riverwalk parking lot is now located. The other was a cotton slide known as “Turner’s Cut,” which was at the south end of First Street just north of the railroad trestle. In the late 1800s, a landing was established just south of the railroad trestle. In 1913, the Corps of Engineers called it the Columbus Landing and described it as, “bluff on east bank; town warehouse; three oil mills; cotton compress; large commerce; no improved water terminal or wharves; no charge for landing (and) Mobile and Ohio and Southern RR terminals (with) poor road to water terminal.” That landing still appeared on the 1928 official Map of Columbus labeled as “boat landing.”

In 1855, and again in 1857, Ballou’s Pictorial, a Boston newspaper, described the loading of cotton onto a steamer at river landings in Alabama. It was the same procedure used up and down the Tombigbee. “On the forward part of the lower deck the bales of cotton are rolled on board by a gang of hands. The bales are started from the summit of a high bluff. Two Negroes with cotton hooks attending on each to moderate the speed of the decent and guide them on their way. A large quantity is thus laden in a very brief space of time, when the bell rings and the boat resumes her way.”

That description would fit the loading of cotton at the landing located at the foot of Main Street in Columbus. There the bank though steep descends rather gradually to the river. In the mid 1800s, a warehouse had been located just south of the present Riverwalk parking lot.

The other description, which was published in 1855, could well apply to the “Turner’s Cut” cotton slide landing on the bluff at the south end of First Street in Columbus. The cotton was dropped or “dumped down a wooden ‘shoot.'” According to Ballou’s, the shoot at Claiborne, Alabama, was nearly 300 feet long and divided into two sides, one being 365 steps and the other smooth planking down which cotton bales would slide to the steamer’s deck. “When everything is ready below, the signal is given, and the bale is launched from the top. At first first it moves slowly, but acquiring impetus as it descends, it whizzes down the latter part of the plane, and descends upon the steamboat’s deck like a thunderclap, making the vessel shudder from stem to stern. A barricade of three or four bales is erected on deck to meet the descending avalanche.”

Usually it was a gang of slaves called “rollodores” who would roll or drag the 500 pound bales of cotton to the edge of the bluff and push them over the edge and down the slide. The deck hands, called “stevedores” who handled the most dangerous task, such as preventing the cotton bales that came down a slide from bounding into the river, were often Irishmen.

In 1856, F. Law Olmsted wrote that the labor of Irishman was cheap: “and they were employed on work where the life of a slave would be in danger, it being cheaper for the Captain to lose an Irish deck hand than one of his slaves.” In describing the use of “cotton shoots,” he added, “Negro hands were sent to the top of the bank to roll bales to the slide and Irishmen were kept below to remove and store them.” A slave was more valuable than an Irish laborer.

In the mid 1800s, E.R. Hopkins was a child growing up in the Ole Homestead, my house on College Street. From the west end of the front porch one looks down on the old Main Street river landing. Hopkins recalled the sights and sounds of that landing and wrote about it in 1936.

“Memory recalls the rough, weird songs, the hoarse commands of the mate, the deep tones of the boat’s bell, the hiss of steam and the splash of the paddles as the wheel turned responding to the pilot’s signal bell to the engineer.” Hopkins also remembered a “deckhand chorus” he had heard as a young man on the Tombigbee at Columbus. The chant dates to the 1870s and its chorus was:

Captain T. H. Moore of Montgomery, Alabama, also recalled that the deckhands would often break into a song when working. A deck hand chant that was recalled from the Alabama River was:

“Sally is a good gal,

The sights and sounds of the old Tombigbee River landings are now lost forever. Deckhands from a steamboat at a Tombigbee River boat landing in 1915. Photo by: Courtesy photo