This time next week, perhaps the most famous symbol of Superstorm Sandy's devastation at the Jersey shore will be gone.

The country's four biggest cellphone companies are set to launch their first joint advertising campaign against texting while driving, uniting behind AT&T's "It Can Wait" slogan to blanket TV and radio this summer. 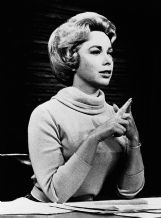 Joyce Brothers, the pop psychologist who pioneered the television advice show in the 1950s and enjoyed a long and prolific career as a syndicated columnist, author, and television and film personality, has died. She was 85.

Gunmen opened fire on people marching in a neighborhood Mother's Day parade in New Orleans on Sunday, wounding at least 19.

The government is running out of time to try to halt implementation of a federal judge's ruling that would lift age restrictions for women and girls wanting to buy the morning-after pill.

More than just a mother, now she's your 'friend'

U.S. builders and the subcontractors they depend on are struggling to hire fast enough to meet rising demand for new homes.

Panel: No profanity on rapper's headstone

With Congress increasingly unable to resolve budget disputes, federal programs on automatic pilot are consuming ever larger amounts of government resources. The trend helps older Americans, who receive the bulk of Social Security and Medicare benefits, at the expense of younger people.

Politicians love few things better than a scandal to trip up their opponents, and Republicans hope last year's fatal attack on U.S. diplomats in Libya will do exactly that to Hillary Rodham Clinton and other Democrats.

2. Sanders steps down as supes president, does not resign COLUMBUS & LOWNDES COUNTY

4. Supes grapple with how to move forward with Sanders still on board COLUMBUS & LOWNDES COUNTY