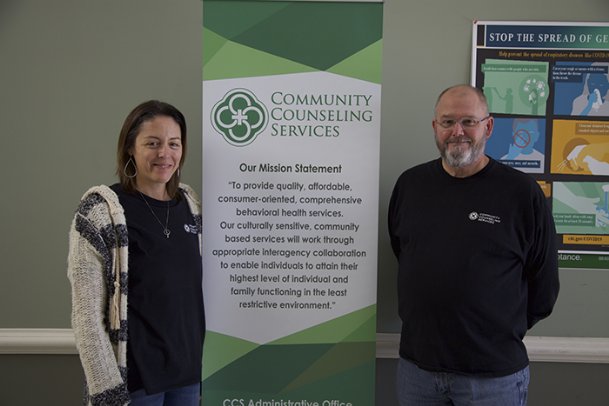 Before learning his name at Community Counseling Services, some of Richard Duggin's colleagues first knew him as "the popcorn man."

Duggin, a self-described popcorn lover, would often treat his co-workers to a fresh bag of the snack at a new staff orientation or on a regular Monday.

"Even if you don't need it, the smell of popcorn tends to bring a smile to people's face," said Duggin's colleague, CCS Chief Operations Officer Karen Frye.

Apart from the role of popcorn provider, Duggin has worn many hats over the past seven years at CCS, where he oversaw the organization's finances and helped with daily operations as chief financial officer. But now, he has taken on a new role.

Duggin was appointed CCS's executive director by the regional Board of Commissioners in October following former CEO Jackie Edwards' retirement. The organization announced the appointment earlier this week.

Board President Ralph Billingsley said Duggin was the right fit.

"We are confident in Richard's abilities to lead his dedicated team in ensuring that the mental health needs of individuals in our service area are met," Billingsley said in a press release.

Duggin will manage an organization with more than 370 employees offering services to residents in seven counties -- Choctaw, Clay, Lowndes, Noxubee, Oktibbeha, Webster and Winston. The organization covers a wide range of services from outpatient therapies to in-house residential treatments and helps those with mental health issues with housing needs.

His transition to the new role, Duggin said, was smooth due to his professional experience in the field for two decades.

Duggin said he was drawn to the field of counseling since he was a teenager. When he was a middle schooler in Memphis, he said, he helped talk a girl out of killing herself by telling her there were people who liked her.

"(She) had a knife to her wrist," Duggin said. "She connected with me (and would not) take her eyes off me, and she ended up putting the knife down. ... I felt good that I was able to maybe in some way help her. I never, 25 years later, thought that I would be working in the field of mental health and counseling, but I am."

In 2001, Duggin began working part time as a youth director for a Baptist church in Tennessee while finishing school for his bachelor's degree in psychology at Mid-Continent University in Kentucky. The issues he had to deal with, he said, were challenging for him.

"I felt called to do that," Duggin said of his job at the time. "... (I) learned really quick that I wasn't nearly prepared for all of the issues that the kids had."

Duggin went on to receive his master's degree in professional counseling from Liberty University in Virginia in 2008 and worked as a case manager and therapist at a mental health center in Tennessee. Some of the cases he dealt with, he said, were domestic abuse-related, and he needed to keep the negative feelings at bay.

"It affected me," he said. "I had two kids, small kids at the time. I loved on them a little more and (said), 'I want you to know how much I love you and I wouldn't do anything to hurt you.'"

Duggin will now lead CCS into its fifth decade with roughly 20 years of experience under his belt. Over the years, he said, the biggest takeaway was the skills he mastered in communication.

"You try to get down to their level, empathize with them, let them know somebody does care," he said. "Sometimes it's just listening, letting them vent, (and that) is cathartic."

Frye said in the years she's worked with him, she's been struck by Duggin's generosity in offering help to others.

"When he first came in 2013, ... he made a commitment and an effort to go and talk to people one on one," she said. "He ended every one of those conversations with: 'What do you need from me?'"

Taking over the organization during a pandemic, Duggin said, proved challenging.

Prior to the pandemic, CCS offered many of its services in person. But when the pandemic hit, many operations had to shift online, and the organization's ability to offer acute care for its patients became limited.

"The ones that were missing those daily services, coming to those programs, to me, were the ones the most affected. Part of the purpose of those programs is to keep them from self-isolating and being by themselves all the time," Duggin said. "It's life or death."

And sometimes, he had to deal with loss -- not just to the pandemic but also to isolation. One patient who tested positive, he said, decided to quarantine at home, but eventually overdosed. Following her death, CCS set up in-house isolation rooms for quarantined patients and allow them to participate in group activities behind closed doors, Duggin said.

"That's when we said, 'We got to double down and come up with a system where folks need to be able to stay,'" he said.

Duggin said his priority in the new role is to challenge and educate people about the stigma around mental illness through CCS's services.

"One in four people have mental illness. And for the most part, it's not something you can see," Duggin said. "The person arguing at the bus stop with nobody in front of him, who is clearly schizophrenic or hallucinating or whatever. And they look scary. They are really not scary, they are just dealing with their own issues standing on the street corner. But that's what is associated with mental illness."

Duggin said the organization is changing that mindset through its services. Traditionally, those with mental health issues would be sent directly to state-run facilities, Duggin said. CCS, on the other hand, aims to provide treatments and help them adapt to a community-based life.

"Somebody being locked up all their life, it's just not right," he said. "In order to (change) that, there's got to be support and assistance in the communities for those individuals, creating a system of care where folks would get discharged from a state hospital and we wrap them around with services so they can continue to live in the community."