From Confederates to Cavaliers 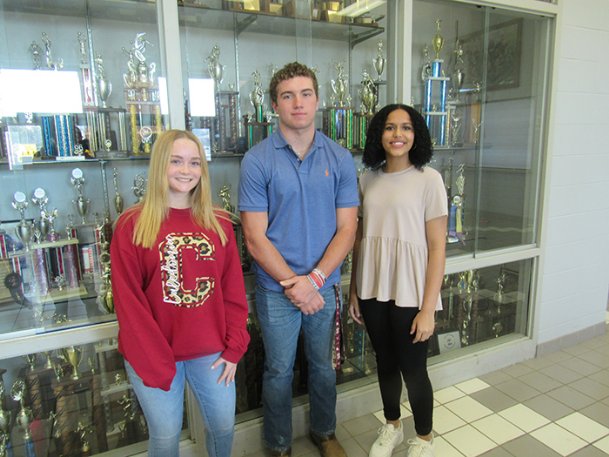 Caledonia High School students Lucy Willcutt (freshman), Will Donald (junior) and Lisa Bassett (sophomore) were members of a nine-person committee charged with selecting a new mascot for Caledoniaâs schools. The group met weekly to set criteria and select finalists from submissions provided by K-12 students. âCavaliersâ was chosen as the new mascot after a vote of more than 1,600 K-12 students. Photo by: Slim Smith/Dispatch Staff

Caledonia's new mascot is the Cavaliers, but there was nothing cavalier about the process used to select it.

"This was something we all took very seriously," Caledonia High School Principal Gregory Elliott said. "We wanted to get it right and a big part of that was getting the process right."

In July, as the debate over the state flag, with its Confederate imagery, was reaching critical mass, the Lowndes County School District board voted to discard Caledonia's Confederates mascot, leaving the Caledonia administrators with the task of finding a more inclusive, less controversial namesake.

The school board's decision was not universally approved in the Caledonia community. Some favored retaining the Confederates mascot, adopted in 1957, while others chaffed over not having a say in removing it.

Elliott recognized the sensitive nature of the task.

"We knew certainly, there were people on both sides of it and everyone's views were important," Elliott said.

To achieve that, the schools formed a nine-person committee made up of administrators, students and alumni.

"We wanted the committee to be diverse and representative," Elliott said.

The makeup of the committee included six white members, three Black members, five male, four female and ranged in age from 14 to 81.

Four students, one from each grade at the high school, were chosen to serve on the committee, along with the principals of the three schools on campus (Elliott, elementary school principal Roger Hill and middle school principal Karen Pittman) and two alumni, Myrtle Burke (Class of 1952) and Tari Shields (Class of 2000).

"It made me feel really good to be chosen," Willcut said. "That they felt kids looked up to me and the faculty and teacher chose me was an honor."

Beginning shortly after the school year started, the committee met weekly to establish criteria for the new mascot and how the selection process would be handled.

Of no small concern was how those who preferred the old name would respond, a group that was also reflected on the committee.

Burke was one of those who preferred keeping the old mascot.

"I would have liked to have kept the old name," said Burke, who noted that the school had no mascot at all until five years after she graduated. "If you look at Webster's dictionary definition, Confederate means one who is united in a league. I didn't see anything offensive in that. But when they asked me to help find a new name, I agreed."

"Keeping the old name wasn't really an option," he said. "So we wanted to move forward and pick a name we could all feel proud of and be unified around."

"The ones from the elementary school were so cute," Willcutt said. "One of them was the Bunnies."

"That was my favorite, too," Bassett said. "They took a lot of time on the pictures they drew. It was sweet."

From the submissions, the committee chose three finalists -- Cavaliers, Cardinals and Commodores -- which were then placed on a ballot for the students to choose from.

Elliott said more than 1,600 votes were cast, with Cavaliers being the top choice, gaining 57 percent of the vote.

Bassett said she felt the process that allowed students to play a prominent role in both the planning and selection turned what could have been a divisive task into something positive.

"It was really awesome to hear about the history of the school from (Burke and Shields)," she said. "And at the same time, we could look to the future. I just think it's awesome that years from now, we can look back on this and say, 'I had a part in that.'"

The students said the selection of a mascot has created excitement in the student body.

Bassett, a cheerleader, said going without a mascot through the recently completed football season limited the creativity applied to signs prepared to adorn the stadium on Friday nights.

Donald, who plays football, said the new mascot will be something the team and school can support.

"I think we did a good job," he said. "I think Cavaliers is something everybody is going to rally around."