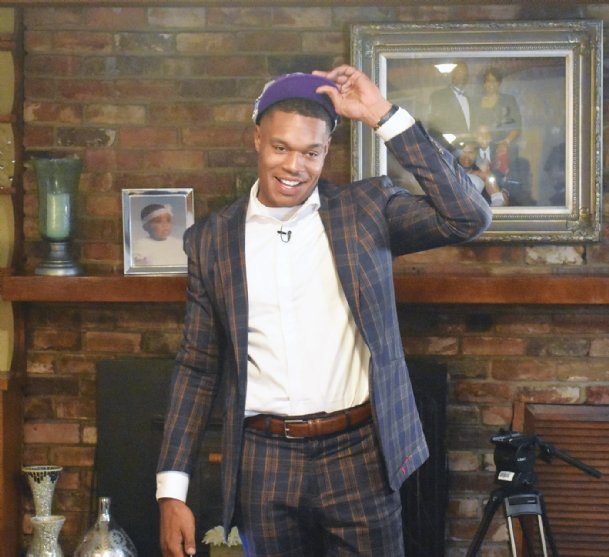 Mississippi State standout Robert Woodard II tries on the Sacramento Kings hat for the first time after being drafted Wednesday. Woodard II is the first Columbus-born player taken in the NBA draft since 1985. Photo by: Garrick Hodge/Dispatch Staff

Mississippi State standout Robert Woodard II shares a moment with his family after being drafted by the Sacramento Kings Wednesday.
Photo by: Garrick Hodge/Dispatch Staff

Mississippi State standout Robert Woodard II poses for a picture with his dog, Titan, after being selected by the Sacramento Kings Wednesday in the 2020 NBA draft.
Photo by: Garrick Hodge/Dispatch Staff

The picks continued to be read on national television Wednesday, but Robert Woodard II's phone remained silent as he sat quietly on the couch at his home in Columbus.

With his hand firmly planted on his chin, the Mississippi State standout watched NBA team after NBA team pass on drafting him. Woodard II had been told by his agent to expect to be selected anywhere from No. 20 to No. 40 in the 60-pick draft. Several mock drafts had the sharpshooting wing going in the first round. Most didn't have him slipping past pick 36. Yet well into the second round, the player once called a "Greek figure" as an ode to his raw athleticism by his collegiate coach did not hear his name called.

Then, at long last, Woodard II's phone rang. After a few seconds, the Columbus native grinned from ear to ear before turning to his father, Robert Woodard.

After completing a trade with the Memphis Grizzlies, the Sacramento Kings selected Woodard II with the 40th overall pick, fulfilling his lifelong dream.

He became the first Columbus-born player taken in the NBA draft since Sedric Toney in 1985 and the first MSU player to be drafted since Woodard II's former collegiate teammate Quinndary Weatherspoon was selected by the San Antonio Spurs in 2019 (No. 49 overall).

Shortly after the call ended, Woodard II put his phone down to watch his name be announced on live television by ESPN. A small chorus of cheers erupted from the Woodard household, as a select few friends and family were with the suddenly new professional basketball player on the biggest night of his life.

"Any parent wants the best for their kids," the elder Woodard said. "When they want something so bad and you get to see it come true, it's truly a blessing."

The smiles continued, and never ceased. After his family dug through 30 different hats given to the Woodards by the league before the draft -- one for each NBA franchise -- Robert was finally presented with the cap bearing the Kings' logo.

Then came a never-ending barrage of photos. Dressed for the occasion, Woodard II donned a special suit that was lined with photos of his family and his dog, Titan.

"This is like the first time the draft has been in the fall, so I wanted a fall type of feel," Woodard II said. "The inside was full of my family; I mean, they've been here with me the whole way and made sacrifices for me. And I put Titan in there, because he's like my son, couldn't leave him out."

As the news of Robert's selection by the Kings spread through the neighborhood, more relatives and friends came pouring through the Woodard residence, with each donning a mask as a COVID-19 safety measure.

In that moment, Woodard II seemed to have forgotten about what felt like an agonizingly long wait and soaked in the moment, appreciating the sense of community he had in Columbus.

"It was kind of a long night for me, but patience is the key," Woodard II said. "I just had to stay consistent through everything and stay even-keeled the whole way through."

It wasn't long ago some thought Woodard II could be considering returning to MSU for his junior year. His fateful decision came down to the eleventh hour.

Despite declaring for the NBA draft almost immediately after his collegiate season was abruptly cut short by the cancellation of the Southeastern Conference tournament, Woodard II maintained his right to return to college if the feedback he received from scouts wasn't optimal.

For months, sources close to Woodard II were unsure which way he was leaning. Some thought he'd stay in the draft. Others thought he'd be back with the Bulldogs. The majority just flat out didn't know.

MSU coach Ben Howland pleaded with Woodard II to make sure he was going to be a first-round pick if he was going to stay in the draft, citing a much higher chance of a long, fruitful pro career if selected in the first 30 picks than if he fell to the second round.

Days prior to the Aug. 3 deadline, Woodard II got to work on a pros and cons list. The decision wasn't an easy one for Woodard II, who has always valued education, graduating Columbus High as the valedictorian his senior year. One of Woodard II's worst collegiate games of his career could be attributed to pulling all-nighters studying for final exams.

But that weekend, Woodard II had an epiphany. He felt in his heart he was ready, both mentally and physically, for the grind of the NBA schedule. And even if he wasn't taken in the first round, so much uncertainty surrounded the prospects of returning to college. What if he returned to MSU, and the season was canceled? Or, worst-case scenario, he tested positive for COVID-19 and had to miss an extended period of time, resulting in his draft stock slipping even further?

"I just didn't know how (a college) season would go," Woodard II said. "I wanted to bet on myself, and I feel confident with what I decided."

The next time Woodard II travels to Sacramento, it will be his first time setting foot in the city he'll now work in and call home.

"I'm excited, definitely not where I was expecting to be out in California," Woodard II said. "It's a big transition for a Mississippi guy. But I'm ready for it, and I'm most definitely excited."

Woodard II's life is about to change tremendously. From living in a completely different geographic area of the country, to playing at the highest level of basketball, to his bank account. If the monetary value stays similar to what 2019 40th overall pick Justin James received, Woodard II will be in line to sign a contract resembling three years, $4.2 million with the first two years guaranteed. He's already tried to plan ahead for his new fortune, speaking with Weatherspoon the last few months about how to manage his money. When his first check clears, his first purchase will likely be very modest, though.

"I've thought about it a little bit, but I really just don't need anything right now," Woodard II said of his first purchase as a pro athlete. "Probably just some clothes, that's about it for now."

Woodard II hasn't spoken with any members of the Kings' organization, so it's unclear when he'll make the trek to California, but he believes it could be before this weekend ends.

There won't be any offseason to speak of, with training camp opening Dec. 1 and the season scheduled to start Dec. 22.

But after training for seven straight months, Woodard II can't get on a court soon enough.

"Coming in, I'm going to be the Energizer Bunny, the guy who does it on both ends," Woodard II said. "Especially on the defensive end, I want to guard the best player on the opposing end. On offense, I want to stretch the floor and make life easier for my teammates."

It's unclear how much playing time the former Columbus Falcon will earn in his rookie year. The only decision that has been made is that Woodard II will wear No. 13 as a pro, one number higher than the one he wore in college.

But whenever Woodard II makes his NBA debut, he'll be ready.

"It'll be a lot of emotions that night. I mean, there's a lot of emotions right now, and I don't have a jersey on yet; it's just a hat," Woodard II said. "It's just a dream come true; I'm ready to compete with the elite talent in the world. I just can't wait, man."