Columbus volunteers ask for donations to cook, deliver Thanksgiving meals to those in need 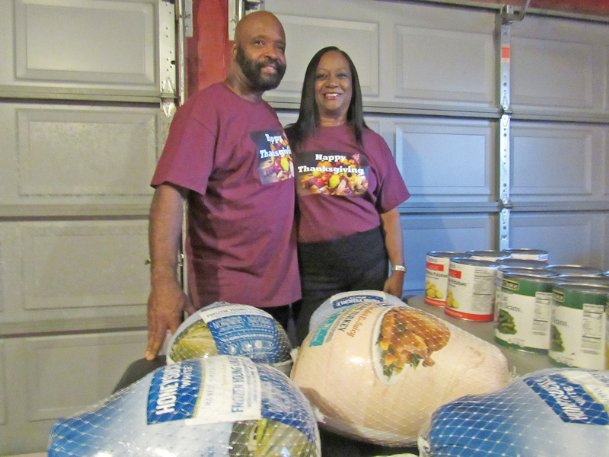 Johnny Hampton and Sherry Ellis have been stock-piling food in the garage of Hampton's East Columbus home as they prepare to deliver meals to as many as 500 people on Thanksgiving Day. Their decision to feed people came after city officials said they could not provide facilities that other Columbus volunteers have used to prepare and deliver Thanksgiving meals since 1994. Photo by: Slim Smith/Dispatch Staff

When Sherry Ellis left Georgia to return to her hometown of Columbus two years ago, she threw herself into community service.

"I grew up in Columbus and always was involved in community service," Elllis said. "I always had a heart for it. So when I came back home, I wanted to do anything I could for the community."

Last year, one of the things Ellis volunteered for was the Thanksgiving meal distribution that Annie Barry has been providing for 25 years with the aid of the city of Columbus. Columbus schools provided the cooking and staging facilities that allowed Barry and her volunteers to deliver 1,700 Thanksgiving meals to the elderly, the poor, the disabled and those who had no family with whom to share the holiday meal.

So, when Ellis met with Barry's group and city officials to discuss this year's Thanksgiving meal service, she was dismayed to learn the school could not provide the necessary facilities because of COVID-19 restrictions. Even as the meeting was in progress, she was on the phone with a childhood friend, Johnny Hampton, who was working his shift at Steel Dynamics, to fill him in on the proceedings.

"She told me it didn't look like they were going to be able to do the food plates," Hampton said. "As soon as I got off work, I stopped by Sherry's house. I told her, 'We know a lot of people who will help. Let's do this ourselves.'"

Hampton's reaction was no surprise to Ellis.

Hampton has long developed a reputation as a "Johnny on the spot" in the community.

In February 2019, when a devastating tornado ripped through the neighborhood where Hampton grew up, he sprang into action, setting up shop at a vacant lot on Seventh Avenue and feeding the shell-shocked people of the community.

It wasn't a one-time feed, either. With the help of friends and his fraternity brothers from Rust College, Hampton fed people every day for 19 days. Hampton was there every day. After he exhausted his vacation days, he would leave a 12-hour work shift and go straight to the cookers, squeezing in a couple of hours of sleep where he could before returning for another work shift.

"We were there before the Red Cross got here and still here after the Red Cross left," said Hampton, an Army veteran who moved back to his hometown in 1993.

While Barry has replaced her usual meal delivery efforts with a frozen turkey drive, Ellis and Hampton hope to still deliver a few hundred meals on Thanksgiving Day. They are spreading the word among friends, mostly through social media, to collect food and money needed to provide as many meals as possible.

As of Friday, the pair have collected 11 turkeys, dozens of cans of corn, green beans, flour, potatoes, bottled water -- everything needed to provide a traditional Thanksgiving meal.

Hampton will cook the turkeys using his own equipment. A small group of friends will help out with preparing the side dishes and trimmings. Good Deeds, a local civic group, has arranged for 30 people to deliver the meals between 9 a.m. and noon on Thanksgiving Day.

"Because of COVID-19, we're not really looking for volunteers," Hampton said. "We'll just have a few people doing the cooking and preparing everything so we're not exposing each other to a large group of people."

What Ellis and Hampton do need are donations.

"People can donate money, which we will use to buy whatever we need, or if they call us, we can tell them what things we are short on," Ellis said. "Right now, we need everything."

Hampton said if they are short on turkeys, he'll purchase leg quarters to serve as the entree.

"The more donations we get, the more people we can serve," Ellis said. "We may not be able to deliver 1,700 meals like Ms. Barry did last year, but we'll serve as many as we possibly can. And if we have anything left over, we may try to do this again at Christmas."