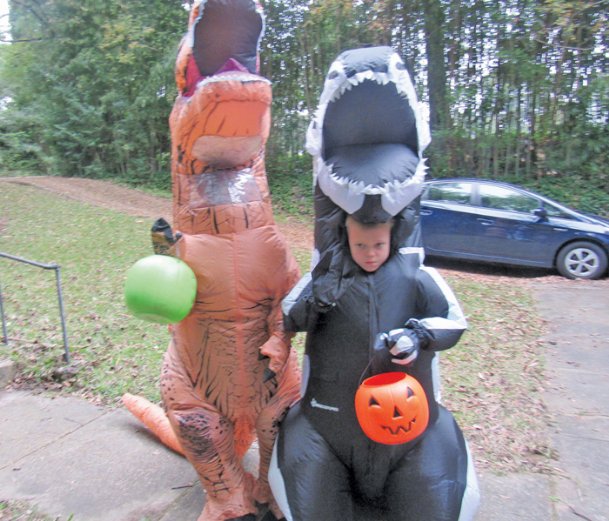 Dinosaurs Mark Leonard, 10, and his brother, David, 8, won't be trick-or-treating this year. Instead, the Columbus brothers will attend a small party after attending a Saturday night wedding. Photo by: Slim Smith/Dispatch Staff 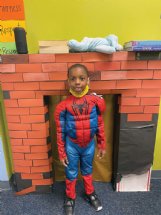 Spiderman, aka Tristen Miller, 5, of Columbus will be having his Halloween fun at home with his four siblings this year instead of trick-or-treating.
Photo by: Courtesy photo

Sales of Halloween-themed baked goods at Vowell's Marketplace in Starkville have been down this year, which suggests more families are staying at home for the holiday, says Monique Tice, one of the store's managers.
Photo by: Slim Smith/Dispatch Staff

All dressed up and no place to go.

Last week, Ginny Leonard was sitting in her car in the line outside Annunciation Catholic School, waiting to pick up her sons, Mark, 10, and David, 8, when she heard about Columbus Mayor Robert Smith's message on the car radio.

On the city's Facebook page, the mayor asked Columbus residents to refrain from taking their children trick-or-treating.

"I was thinking, 'Do I tell the boys now or do I wait?'" she recalled.

For the Leonards, Halloween typically has many features -- pumpkin carving, decorations, picking out costumes (the boys have inflatable dinosaur costumes this year). But the focal point of the holiday has always been trick-or-treating on Halloween evening.

With the threat of COVID-19, those plans have changed.

"We actually are going to a wedding that night," said Wade Leonard, the boys' dad. "There are a couple of other parents who will be at the wedding that have kids and our boys are going with them after it's over for a little party. But for the first time, they won't be trick-or-treating."

Patricia Bobo, whose five kids range in age from 2 to 10, has reached the same conclusion, even though her family's Halloween celebration has never centered around trick-or-treating.

"We have never been very traditional as far as going door-to-door," she said. "Now that the mayor says not to trick-or-treat, it's going to be more a family thing for us. They'll still have their costumes. (Her 5-year-old, Tristen Miller, proudly wore his Spiderman costume to the Boys and Girls Club on Tuesday). We'll do s'mores, watch movies, bob for apples, play games, dance. We'll just have fun. But we won't be trick-or-treating."

To what degree other parents will refrain from trick-or-treating this year remains an open question.

"I don't know what to expect, really," said Suzy Stanton.

Stanton and her elderly mom moved into Sherwood Forest subdivision just north of the Columbus city limits three years ago. She was quickly advised by her new neighbors that her new neighborhood was a "go-to" destination for trick-or-treating far and wide.

"We usually go through three big bags of candy," she said. "We love it. We have family over -- eight or nine, and that doesn't count the kids -- and we all dress up in a theme. Last year it was Harry Potter."

Their home is still decorated for Halloween and the family will again gather to greet trick-or-treaters. But concessions have been made.

"I don't think we're going to have nearly as many kids as we had before," Stanton said. "I didn't buy as much candy this year. And we've decided we'll dress up as baseball players and kind of throw the candy like a ballplayer throwing a baseball. We want it to be as safe as possible."

The business of Halloween

Businesses that cater to Halloween sales have seen subtle signs that suggest people will still have Halloween, but it may be a different kind of celebration.

"Candy sales have been down a little," said Monique Tice, a manager at Vowell's Marketplace in Starkville. "It's certainly not flying off the shelf. Our bakery is where sales are really way off. We normally sell lots and lots of Halloween cupcakes, but that's been way down this year. But pumpkin sales have been great. We sold out of our pumpkins over the weekend."

What does that tell her?

"I think it's going to be more of an at-home Halloween this year," Tice said. "Less trick-or-treating and parties. More people staying home."

Connie Willsey, owner of Costume Party, a costume shop on Russell Street in Starkville, has been pleasantly surprised. Folks are still buying costumes, she said.

"Halloween is happening this year," she happily noted Tuesday. "We have been slammed all day and grateful for it. I don't believe it will be as good as a typical year, but I believe people are going for it, regardless."

The realities of COVID-19 are affecting Halloween plans for adults, too.

Halloween falls on a Saturday this year. Normally, that would be a godsend for club owners like Rick Welch, owner of Rick's Cafe, a popular venue for Mississippi State students.

"We've had big crowds in the past," said Welch, who will offer a scaled-down event this year.

"We have two things going on," he added. "First, we'll have our first band since February, but we'll have 30 tables, and it will be an all-seated concert. Outside at our Tiki Bar, we'll have a costume party. Since it's outside we can have more people, but we're still limiting it to 100 people."

Based on his conversations with other club owners, he expects most to have some sort of Halloween event.

"I think everybody is trying something, even though they aren't doing big events," Welch said. "We still have employees and we still have to make a living."

Mississippi University for Women students Will Balestrino and Chris Marshall sat at the university cafeteria Tuesday, shooting the breeze.

What wasn't part of the discussion was Halloween plans.

"Normally, I'd probably be at a party of some sort,'' said Balestrino, a junior from Fort Smith, Arkansas. "This year, to be honest, I'm probably going to be doing homework. Finals are really close and I've got to get caught up."

"I'm probably going to be sitting in the dorm, watching movies or playing video games," the junior from Biloxi said. "A lot of the people I know personally were hoping for something to do, but most of them are going to be sitting back doing a lot of nothing.