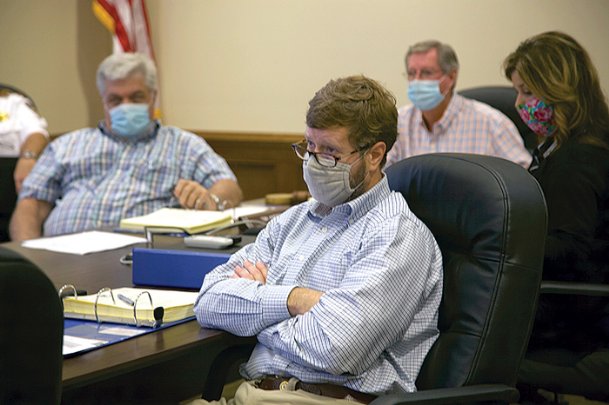 Trip Hairston, District 2 supervisor and newly-elected president of the board, listens as District 5 Supervisor Leroy Brooks tells him his lack of seniority does not qualify him for the presidency Thursday morning. Hairston told The Dispatch he does not think systemic racism played a role in the 3-2 vote Thursday morning that elected him as president. As president, he said he will try to have inclusive conversations with all supervisors. Photo by: Yue Stella Yu/Dispatch Staff

District 1 Supervisor Harry Sanders listens as District 5 Supervisor Leroy Brooks points at him Thursday morning and accuses him of being racist. The board of supervisors had just elected District 2 Supervisor Trip Hairston, white, as board president. The vote was split 3-2 along racial lines, which Brooks said perpetuates "institutional racism."
Photo by: Yue Stella Yu/Dispatch Staff

Lowndes County resident Sherry Ellis calls for District 1 Supervisor Harry Sanders' resignation from the board Thursday morning. Ellis said Sanders' June remarks that Black people remained "dependent" hurt her deeply, and the pain deepened when Sanders said Oct. 5 that Black supervisors had no experience "signing the front of a check instead of the back of a check."
Photo by: Yue Stella Yu/Dispatch Staff

After serving on the Lowndes County Board of Supervisors for just 10 months, District 2's Trip Hairston will soon become the board's president.

With a 3-2 vote along racial lines, it was decided.

Supervisors Jeff Smith of District 4 and Leroy Brooks of District 5, both Black, dissented. Both supervisors, who have repeatedly criticized the board for its lack of Black leadership, left the boardroom shortly after the vote.

"What you all are doing today is an insult," Brooks told the three supervisors Thursday. "You all created the situation, and I hope you can live with it."

Hairston will begin serving as board president Nov. 2.

The Thursday vote was a carryover from the heated argument among supervisors Oct. 5, when Brooks' motion to elect Smith as board president was tabled. Brooks and Sanders then clashed over the presidency and accused each other of being "racist." Sanders vacated the president's position in June after commenting on the record to a Dispatch reporter that Black people had remained "dependent" since slavery ended and had not "assimilated" as well into American society as other groups. Public calls for his full resignation from the board continue.

Supervisors select their president at their discretion by a simple majority vote. The president has no specific voting authority but presides over meetings and is widely considered the "face" of the board.

Holliman, who took over as acting president after Sanders stepped down, said Oct. 5 he intended to yield the presidency by the end of the year. However, he moved Thursday to discuss board presidency -- an item not printed on the agenda -- and elect Hairston, a surprise to both Brooks and Smith, they said.

"There's ample opportunities for board members to reach out to each other. ... That didn't take place," Smith said of the vote Thursday morning. "A vote was called for and a vote was given. This all looks like it's pre-planned. So for those who don't like surprises, they don't have no problem giving them."

Hairston nominated Smith as his vice president Thursday morning, but Smith immediately refused. The lack of discussion with him, he said, is disrespectful.

Hairston told The Dispatch Holliman had told him before the meeting he would be nominated as president. Since the board tabled the matter at its last meeting -- when Smith was nominated -- he said he naturally assumed the issue would reappear Thursday.

"When you have a motion to table the thing, you know something is going to come up at the next meeting," Hairston said. "At least I did."

An argument over qualifications

During the meeting, Brooks, who has served on the board for 37 years, attacked Hairston's selection for his lack of seniority. The decision to place the supervisor with the lowest tenure at the head of the table, he said, was disrespectful, especially when both Black supervisors have served for more than a decade.

"Trip, I don't doubt in my mind that you have some skills that will serve this board well," Brooks told Hairston. "But then for you to come in and ... for some reason think that you should be the president of the board is a total insult to every Black person in this community. You have not even been here for a year."

The board has not had a Black president since 2004, when former supervisor Joe Brooks was selected to the position. The maintenance of white board presidency, Brooks said, perpetuates systemic racism.

"Seemingly, you all have no understanding of what's going on with America, that you are all hell far bent on perpetuating institutional racism," he said. "It's become so commonplace that every white man that walks into this boardroom thinks that he's entitled to being board president."

But for Sanders, Hairston's professional experience and education is good enough. Hairston earned a master's degree in business administration and spent five years as a budget analyst for the state Legislature, Sanders said, reading off a copy of Hairston's resume.

"I don't think that anybody else in this room can match these qualifications," he said after Brooks and Smith left the meeting. "... Leroy and Jeff, they think that just because they are Black, they need to be moved up."

Brooks later told The Dispatch running a county should not be compared to running a business.

"My background is in public administration. An MBA is in business," he said. "(Hairston) doesn't know anything about county government. Because you are a dentist does not mean you can do heart surgery."

Holliman, who has said he will not run for supervisor again, said he nominated Hairston because he wanted younger supervisors to gain more experience.

Hairston told The Dispatch he thinks having the lowest tenure lends him a pair of "fresh eyes."

"Whether I have experience in seniority on the board or not, I think you can look at it as being somewhat refreshing," Hairston said. "I don't bring any agendas to this board other than what I was elected to do. I don't have any past history, and that may be a good thing."

Apart from the argument over Hairston's tenure, Smith also expressed frustration with the discord on the board that has festered for months.

Hairston said the Thursday decision to elect him is not proof of systemic racism, but rather demonstrates a divide along party lines. Brooks and Smith are Democrats, whereas the other three are Republicans.

"That decision for board presidency or anything has nothing to do, in my opinion, with race. ...The perception may be out there in the African American community and I understand that," he said.

Hairston said as president, he is open to the idea to rotate the presidency, for which Smith advocated. He also said he would try to be more inclusive and hear ideas from both sides to amend the relationship.

"Whether he's vice president or not, I plan on working with Jeff on an awful lot of things," he said. "And I'm really committed to being transparent. ... It's a challenge."

Brooks said he does not believe Hairston will do what he said.

"(Hairston) doesn't interact with me. We rarely have a conversation. He rarely speaks to me," he said. "How is it that he ... wants to be inclusive now when he wasn't from the beginning? There is not much Trip can tell me because he's shown me that he has the same attitude as the other guys."

The Thursday decision also came after two Lowndes County citizens criticized Sanders' June remarks and his most recent comments Oct. 5, urging the board to "do the right thing" and elect a Black supervisor as president. Protesters gathered again after more than a month of silence, chanting "Harry must go" outside the courthouse.

Sherry Ellis, who appeared at a June protest calling for Sanders to resign, told Sanders during the Thursday meeting that the hurt felt by the Black community had never died down. Instead, she said, it took on another level when Sanders commented Oct. 5 that Brooks and Smith had "no experience ... signing the front of a check instead of the back of a check." She urged the board to elect Brooks or Smith as president.

"Perhaps all of you feel since there's no crowd in or outside the courthouse every time that you meet that the anger has subsided over the remarks made by you, Mr. Sanders, regarding Black people," Ellis said. "The anger and the hurt that we feel will never subside."

Teary-eyed, Ellis told Sanders his reputation was tarnished by his racist comments, which she said hurt her "terribly."

"Mr. Sanders, no matter what you consider your greatest accomplishment, they have fallen prey to your racist attitude," she said. "I ask that you resign for the healing, for the betterment of our community. But more importantly, to you, Mr. Holliman, and you, Mr. Hairston, I hope you will not be guided down a road that can only be catastrophic for this community and this board."