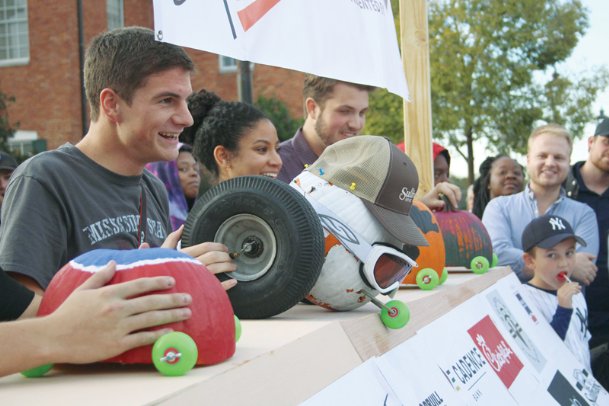 Dorian Purohit, middle, prepares to release her decorated pumpkin during the MSU Idea Shop's "Talladegourd 500 Race" at the Pumpkinpalooza in Starkville in October 2019. The Idea Shop will hold the pumpkin race, which raises money for Oktibbeha County Humane Society and other charities, on Oct. 22 on Lafayette Street this year in lieu of holding it during Pumpkinpalooza, which is canceled due to the COVID-19 pandemic. Photo by: Courtesy photo

Crowds gather at the "Talladegourd 500 Race," a pumpkin race hosted by the Idea Shop in Starkville to raise money for the business's scholarship fund for at-risk youth and other local charities, at the Pumpkinpalooza in downtown Starkville in October 2019. Though the Pumpkinpalooza will not be held this year due to the COVID-19 pandemic, the Idea Shop still plans to host a pumpkin race on Lafayette Street, as well as a virtual costume competition, to give families safe alternatives if they are uncomfortable trick-or-treating or doing other more traditional Halloween activities this year.
Photo by: Courtesy photo 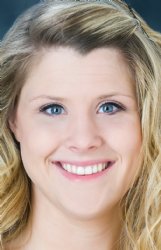 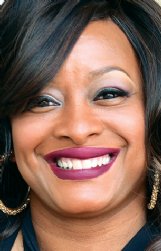 With the COVID-19 pandemic, Halloween might look a little different in the Golden Triangle this year.

Many of the usual haunted houses and other events that kids and kids-at-heart have become used to attending over the years are canceled, such as Starkville's annual Pumpkinpalooza, due to the difficulty of maintaining social distancing at those events.

But that hasn't stopped organizations like the MSU Idea Shop in Starkville and the Community Benefit Committee in Lowndes County from setting up new -- and safer -- events to help raise money to benefit their community.

"People are a little worried about being out and doing trick-or-treating and being out within the community around everybody," Idea Shop event coordinator Brooke Lammert said. "We wanted to do something that was safe for people to be able to come and participate and still have some Halloween spirit."

The Idea Shop, a Mississippi State University-sponsored makerspace business located in downtown Starkville designed to help would-be entrepreneurs design product prototypes and get their ideas off the ground, will again host the "Talladegourd 500 Race," in which individuals, families or businesses can decorate their own pumpkin and enter it into a race to raise money for charity. Last year part of Pumpkinpalooza, Lammert said, this year's event will be a smaller affair held on Lafayette Street on Oct. 22 at 6 p.m., an hour before the university's weekly "Dawg Talk" with MSU football coach Mike Leach.

On the day of the race, the Idea Shop's "Pumpkin Pit Crew" will help attach the decorated pumpkins to a custom chassis, designed by Idea Shop employees, so that the pumpkins can race down a prepared ramp.

Businesses that wish to enter a pumpkin in the race pay a $50 fee, proceeds from which will benefit the Oktibbeha County Humane Society. Families entering only pay $25.

"The entirety of that $25 fee is going to go into a scholarship fund to serve at-risk youth in the community, give them a chance to come in and participate in our workshops or classes that they may not normally be able to attend or afford to attend," Lammert said.

For the first year ever, the Idea Shop will also host a free virtual costume contest from noon-6 p.m. leading up to the race for families who want to remain even more socially distanced, Lammert said. Individuals and families can come by the stop dressed in their Halloween costumes and have their pictures taken in front of a backdrop. Staff will upload all the photos on the Idea Shop's website that night and anyone in the community can vote on their favorite starting the next day. The first place winner will receive a $50 gift card to the shop, while the second place winner will receive a $25 gift card and the third place a $10 gift card.

Lammert stressed the events will be socially distanced and that anyone in the shop would wear masks.

"We wanted to control the amount of people in the space," she said. "This is our first year doing it, so we want to see what this looks like. But we're hoping it will be a fun, family-friendly event. That's the goal."

The Idea Shop is not the only organization that turned to a virtual costume contest as an alternative to more traditional Halloween events.

Lowndes County Sheriff's Office Deputy Rhonda Sanders, who normally sets up a haunted house every year as a fundraising event for the Community Benefit Committee, has instead opened a raffle and costume contest to raise money for its annual holiday bike drive.

"The reason we're doing it this year is for the safety of people, to try to stop the spread (of the virus)," Sanders said. "We still wanted to come up with something to be able to give back to our community. ... Here in Columbus we usually have the best, the people with the biggest hearts at giving, so we wanted to do the same thing this year, be able to help these kids out."

Raffle winners have the chance to win a Nintendo Switch or 50-inch television, Sanders said.

The money to enter the raffle and contest goes to the committee's annual bike drive, which last year raised nearly $15,000 and helped purchase about 362 bicycles for children in need for Christmas. Sanders said without the haunted house, the goal this year is a more modest 200 bikes since they don't have the events that typically come with the house, such as photos and hayrides.

Though the contest will be judged Oct. 31, Sanders said people can begin uploading photos of their costumes now. There will be separate contests for adults and children.

To enter the contest, families can upload photos of themselves on the Community Benefit Committee's Facebook page or email the photos to [email protected]

Sanders said she hopes it will be a safe alternative to the haunted house.

"We still wanted to come up with something to be able to give back to our community," she said. "... Here in Columbus we usually have the best, the people with the biggest hearts at giving, so we wanted to do the same thing this year, be able to help these kids out."