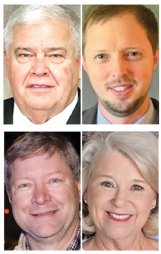 When the final tally came in from the special election for District 37 House of Representatives, Lynn Wright had finished tantalizingly close to winning the seat outright, falling just 47 votes of a majority in the three-candidate race. Instead, he's meeting David Chism in a runoff today.

As voters go to the polls for that runoff, neither candidate is taking anything for granted.

"We've got to keep going, keep working as hard as we can," Wright said. "The votes don't carry over. People have to show up and vote. So we're doing everything we can."

Chism, a Lowndes County businessman who won the most votes in the Clay and Oktibbeha parts of the district, but was badly beaten in the larger Lowndes County portion, said he hasn't spent much time reflecting on the Sept. 22 results.

"We're still in this, absolutely," he said. "I'm looking at this like a clean slate. I won big in Oktibbeha and Clay. In Lowndes County, Lynn Wright is better known, whether it's for the good or the bad. So I've really been working to get out and talk to as many people as possible and listening to them about what their needs are. I've talked about issues that maybe people aren't comfortable talking about, trying to get past all the noise. I think people are listening and that's the main reason for optimism."

For Wright, a former Lowndes County School District superintendent, the past three weeks have been spent traveling through the district, particularly the western parts he had been unfamiliar with.

"When you have 25,000 voters in your district, it's impossible to get to every house," Wright said. "But we're trying to get to as many as we can, from southeast Lowndes County all the way to West Point, Pheba, Double Springs, Maben."

Both candidates said the best part of the campaign has been meeting the voters.

"It's been great to meet the people in the district," Chism said. "There's a lot more diversity in the district than I first thought and there are a lot of people who I think maybe haven't had their voices heard. That's an opportunity for a candidate if he will listen. So that's been the most interesting part for me."

Wright said the campaigning has served to meet old friends and make new ones.

The winner will fill the unexpired term of Gary Chism, who retired for health reasons at the end of the 2020 legislative session.

In some circles, today's District 15 Mississippi Senate runoff between Williams and Yates could be billed as a country vs. city competition.

Williams has been a business owner in Starkville, the largest municipality in the district, for 27 years while Yates lives in Eupora, where her support in Choctaw County lifted her into the runoff.

For both candidates, broadening their support beyond their hometown is essential, they said.

"There are places in the district that I wasn't that familiar with," said Williams, who had a 500-vote margin over Yates, the second-place finisher in the four-candidate field in the Sept. 22 election. "I feel like over the past three weeks, I've gotten to know a lot more about the district by getting out and meeting people in those areas."

For Yates, it's been reestablishing her ties to Starkville and Mississippi State.

"It's not really as big a difference as it may seem," she said. "I was at Mississippi State for years, at a young age as an instructor and later as director of health promotion and wellness. I have so many friends and family from Mississippi State and as a kid, I was always going to Starkville for different things. So I still identify with Starkville and Mississippi State."

With just three weeks between the first election and today's runoff, both candidates have focused on "retail advertising" -- getting out and meeting as many voters as possible.

"It's been different with COVID," Williams said. "Lot's of fist-bumping instead of shaking hands. It's been a lot of long days, but it's been an enjoyable experience and a real pleasure to realize how many wonderful people there are in District 15."

Yates said she's split her time between securing her base and re-introducing herself to Oktibbeha County voters.

"In the rural areas where we did well, we wanted to go back to them and make sure we weren't taking those votes for granted," she said. "We need to do better in Oktibbeha County, so we're working hard to make sure people know who I am."